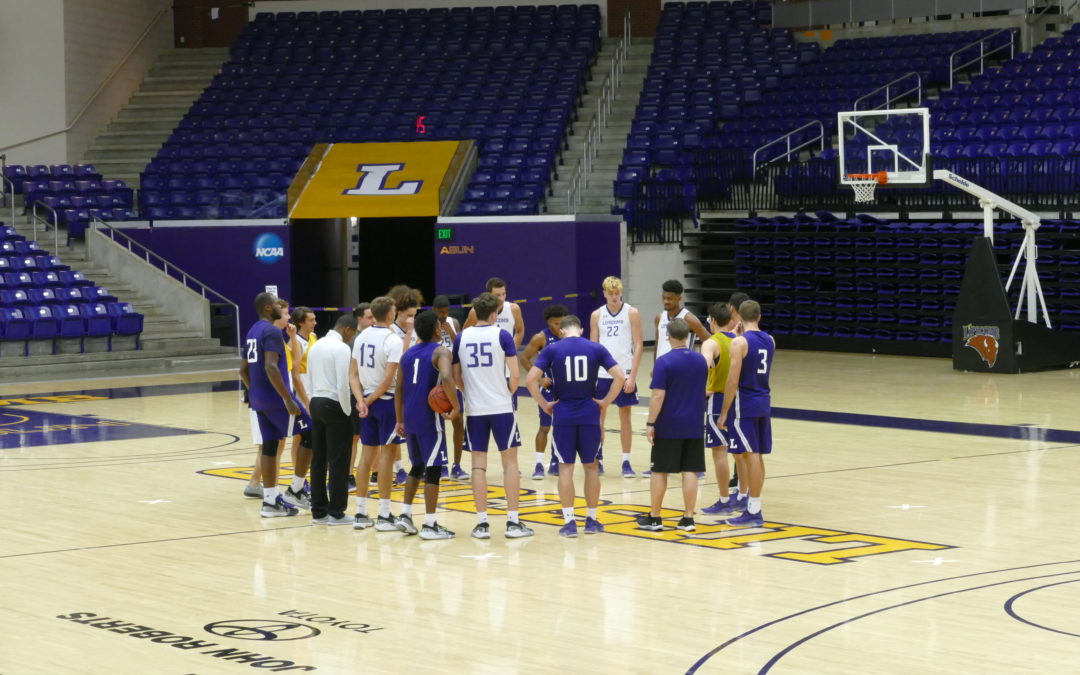 The Lipscomb men’s basketball team will start its season with a different head coach and a lot of fresh faces Tuesday, Nov. 5, inside Allen Arena.

Expectations are not as high as when the Bisons started its campaign last year by being picked the preseason favorites to win the ASUN conference by multiple media outlets.

The Bisons also went on to have one of the best seasons in program history last year; the Bisons won the most games in the programs NCAA era history (29), made it to the ASUN Tournament championship game, and ended its extended campaign by placing second in the National Invitational Tournament (NIT). This year the ASUN preseason media poll predicted the Bisons to finish in fourth place, while the ASUN coaches poll predicted the Bisons to finish in fifth place.

With former Lipscomb men’s basketball head coach Casey Alexander leaving after last season to coach down the street at Belmont, Lipscomb filled its head coaching vacancy by hiring Lennie Acuff. Acuff was formally the head coach at the University of Alabama in Huntsville, where he had been since 1997 and became the winningest head coach in the history of the program with 437 wins.

Coach Acuff brings a style of play that he thinks is very similar to the style the Bisons became accustomed to in years past.

“We’ll play a lot like they played last year,” Acuff said. “Our philosophy is we’d really like to shoot layups or threes; that’s where we’ve kind of made our living in the past and we’ll do that a lot with this team.”

Lipscomb ranked second in the ASUN conference last year in 3-point percentage and field goal percentage, behind behind Florida Gulf Coast in both categories.

Buckland and Asadullah step into the spotlight

Senior guard Michael Buckland and sophomore center Ahsan Asadullah were both named to the ASUN preseason all-conference team this year. Asadullah is the leading returning scorer for the Bisons, while Buckland is one of just two seniors on the team and the only returning starter.

With the other four regular starters from last season leaving Lipscomb, Buckland and Asadullah are expected to play a major role for Lipscomb this season.

“They were probably a couple guys that were a little bit in the shadows last year,” Acuff said, “but if you go back and watch their games from last year, which I’ve went back and watched all of them, they had a lot to do with their success.”

The 6-foot-8 Asadullah played in all 37 games for the Bisons last year and learned some things in his first year that he can take into this year.

“I learned to stay the course,” Asadullah said. “If things start going bad, one game, one half, maybe even 10 minutes just keep playing hard because things could turn around at the snap of a finger.”

Buckland is the most experienced returning Bison, holding the active career leads for games started (63), and points (583), among most other categories.

“Both those guys are really key players and we need both of those guys to step up for us this year for sure,” Acuff said.

Not only will the Bisons be playing under a new head coach, but they will also be playing with a team that has only four upperclassman and eight freshmen.

“He’s really talented, he’s fast-twitch, he’s good north and south, he can get the ball downhill, and he’s got a knack for finishing around the goal,” Acuff said. “I’m really a big fan of K. J.’,s and I think he’s got a good chance to be a really good player here.”