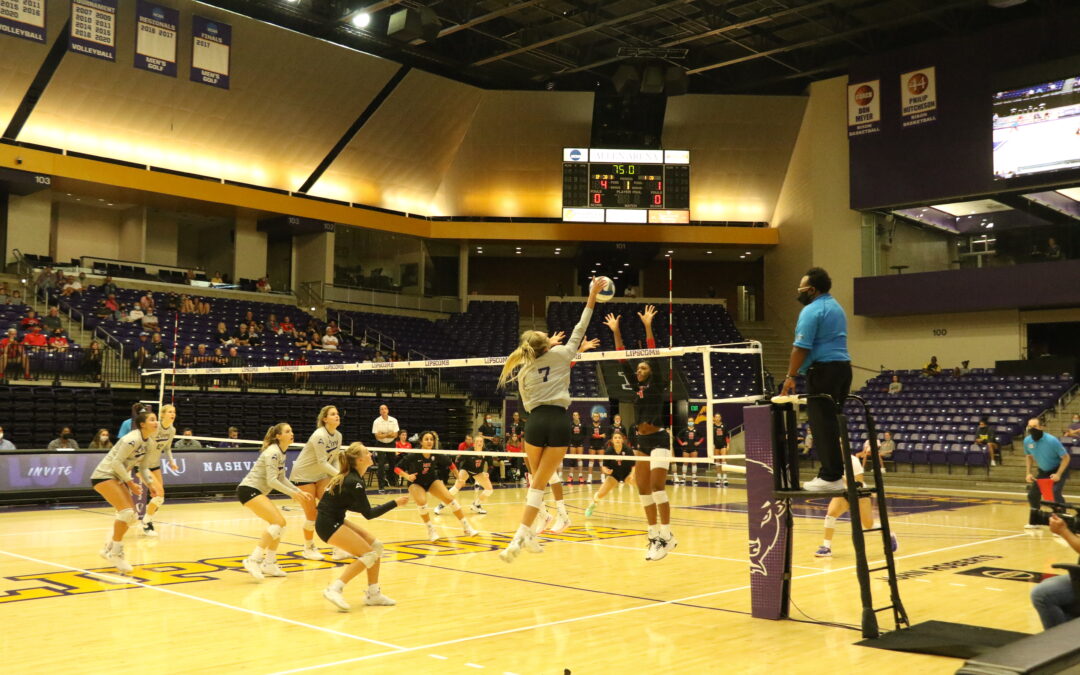 Lipscomb women’s volleyball lost 3-1 to the Western Kentucky Hilltoppers on Friday night, moving to 1-4 on the season. After a loss to start the Lipscomb University Invitational, the Bisons matched up against the nationally-ranked Hilltoppers. Western Kentucky was ranked #15 on the
Week 1 American Volleyball Coaches poll. Lipscomb also entered 1-9 in the all-time series against WKU.

The Bisons started off hot on a 4-0 run with momentum in their favor in the first set. The Hilltoppers were able to push it back to a 3-9 lead after a few quick back-and-forth points. WKU took a 5-point run to tie the set back up at 9-9. The Bisons responded with a quick 5-point run of their own to take a 14-9 advantage. After a few 3-point runs by both teams the Bisons finished the first set, winning 25-21.

With the first 9 points split 4-5, the second set was always going to be tight. A double block at the net by senior Garrett Joiner and sophomore Meg Mersman brought the set back to 10-10. A slow but substantial lead was grown by the Hilltoppers as they led 15-22 after a back-and-forth battle. The second set finished 17-25 which brought the sets to an even 1-1.

The fourth set was a must win by the Bisons as they entered what would turn out to be the final set. An early 4-point run set the Hilltoppers up nicely with a 7-2 lead over the Bisons. The Hilltoppers put up another 3-point run, to which Lipscomb responded with a 3-point run of their own. WKU had slowly built more of a gap between the teams and brought the match to 12-16 in their favor. The away side put together another 5-point run to pull the game to 12-21. After a fight to end the fourth set, the Bisons lost 25-17.

The Bisons are in action again at 2 PM CDT on Sunday, September 5th in Allen Arena when they face off against the Wake Forest Deacon Demons to close out the Lipscomb University Invitational.