The stars and the sky were the inspiration for The Elevate Dance Show by The Foundation Dance Theatre (FDT). The show reminds audience members to always look up with A Heavenly View.

The Elevate Dance show was a 3-day event (March 6-8) held at Bennet Campus Center in Shamblin Auditorium. Dancers, who are part of this company and the theatre department had the chance to share what they have been rehearsing since the fall. There were group dances and duets with styles that varied from ballet, tap, jazz and hip hop.

The FDT company is under the direction of Kari Smith & Leigh Anne Ervin who lead all students during the year. During the show, in between dances, a video would be shown of Kari Smith explaining the principles of the FDT. Kari Smith who is an instructor for the company states there are five pillars they want their students to understand. Leaning into these pillars during their time with the company. Storytelling, Education, Endurance, Passion, and Artistry. As one dance ended a video would be shown to explain each pillar, but also show behind the scenes footage of these dancers.

“Dance is a big part of musical theatre but, dance is kinda a different world than theatre. They all fall under storytelling but, with dance, it’s very universal,” said sophomore musical theatre major Drew Flickinger.

“I auditioned for FDT in the fall of my freshman year and they took a shot at me, so I got to do elevate last year and I really loved it so of course, I did it again.”

Flickinger appeared in four out of nine dances. However, his favorite style of dance is ballet.

“I love Ballet, and I know that’s not a popular opinion, but there is something that makes sense in my brain that says, ahh yeah we’re supposed to be turned out. (referring to the position of his feet) I also love Bob Fosse, a jazz choreographer who did a lot of Broadway work and created his own style of dancing.”

“Our company is led by two dance professors, Professor Smith and Professor Ervin, who pick all of the dances and on the first day of rehearsals they share their vision for a piece, what they are looking for, the characters they give you and with that we take their vision and figure out what it means me for (us) as dancers.”

To close the show all members of the company performed an upbeat dance to a Sky Full of Stars that ended with a standing ovation from the crowd. 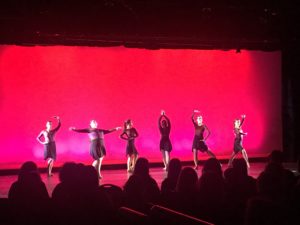 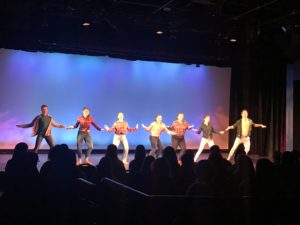 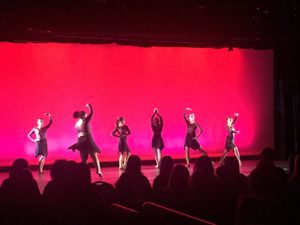 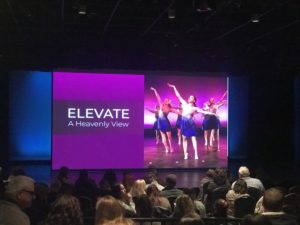