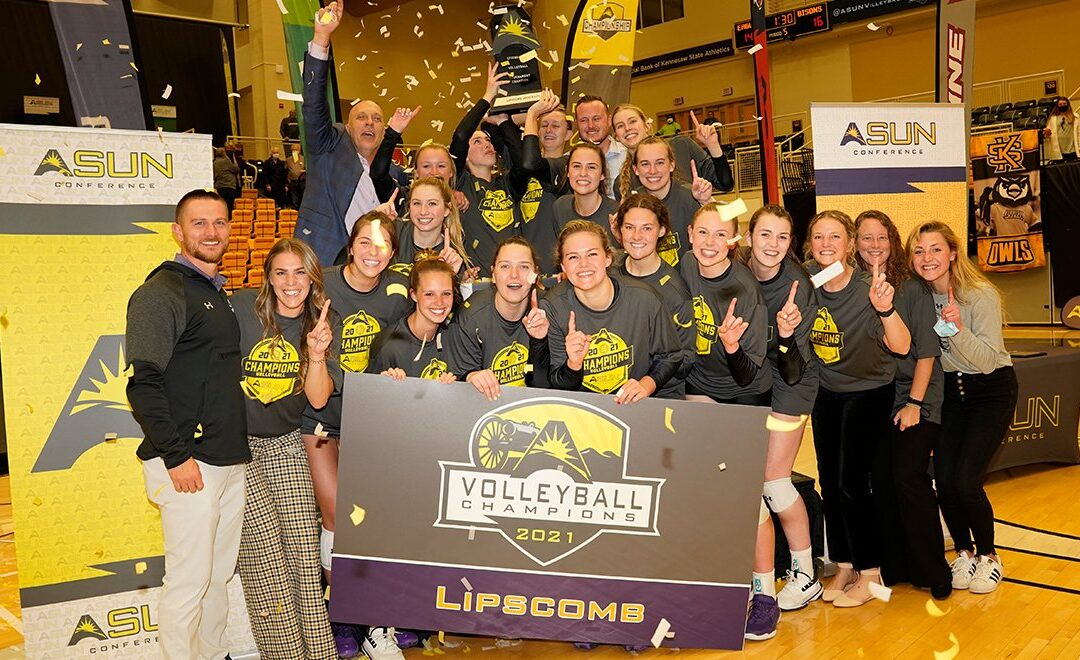 On Saturday night, Lipscomb’s four seniors were just two consecutive FGCU points away from never seeing the NCAA tournament in their college careers.

In the fifth set, FGCU’s Erin Shomaker gave the Eagles a 14-13 lead to set up match point. All the Eagles had to do was collect the next point, and that would have been ballgame.

But then three of the Bisons’ seniors aided in a 3-0 run that ultimately gave the Bisons the win Saturday evening. Senior hitter Megan Kuper tied the game on kill, and senior blocker Sami Rubal assisted with a block after that. And then it was senior defensive specialist Ashley Maher who set the ball up for junior hitter Garret Joiner, who rocketed it past FGCU libero Dana Axner near the back endline for the game-winner.

It will be the eighth NCAA tournament appearance in Lipscomb history, all of which have come under 18-year head coach Brandon Rosenthal. Lipscomb first advanced to the tourney in 2007. The Bisons have won the ASUN championship seven times (they received an at-large bid in 2014).

ESPNU will air the selection show at 3 p.m. CT. The Division I volleyball tournament will be played in Omaha, Nebraska.

Rubal and Kuper led the way with 14 and 13 kills for Lipscomb, while Joiner followed up with 12. Freshman Delaney Dilfer once again had an impeccable evening setting the ball, as she accounted for 50 assists after garnering 53 the night before.

Lipscomb won the first set 25-21. The Bisons led 20-12 off a Rubal service ace, and Joiner put Lipscomb one point away from a victory with a kill (24-16) before FGCU threatened on a 5-0 run. Senior hitter Courtney VanLiew misfired on an attack afterwards to give Lipscomb the victory.

The Bisons would have won the second set off an Eagle net violation had FGCU not challenged. A review ultimately held that Lipscomb had touched the net first, and the Eagles walked off the court with a 3-0 breakaway to take the second set 28-26.

Lipscomb held the game’s fate in its own hads off a much more decisive 25-19 set three victory.

But FGCU started the fourth set off strong with an 8-4 run capped by Lipscomb freshman Kamryn Bacus’s 10th error of the night. The Bisons eventually took a 15-13 lead, but FGCU regained their mojo at 18-17 thanks to redshirt freshman Kortney Reynolds. They never looked back and won the frame 25-21 on a 3-0 run.

The fifth set was a thriller the whole way through, with both teams trading leads and ties. Bacus failed on an attack to cap a 3-0 FGCU run that put the eagles up 8-6. Rubal put the Bisons back within one on a kill, but FGCU generated another 3-0 run to take the 11-7 lead.

Lipscomb freshman Meg Mersman committed what initally was ruled an attack error, as the ball initially looked to clear all Eagle defenders on its way past the back edge of the court. FGCU would have led 12-7 at that point. But a challenge showed that the ball had hit hands on the way, and the Bisons faced only a three-point hole, 11-8.

A Mersman block finished a 4-0 run that tied the fifth set at 11. Kuper would eventually re-tie the game at 13 before FGCU took the Shomaker the go-ahead that gave them match point.