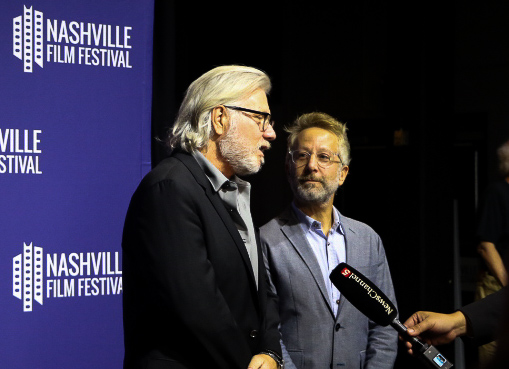 The documentary, directed by Brent Wilson (no relation) and named after The Beach Boys’ 1971 hit, reflects on the long-lasting yet tumultuous career of legendary musician and Beach Boys co-founder Brian Wilson.

“(Brian)’s one of the most important artists of the 20th century,” Wilson said.

I’ve always seen him that way — I see Brian as an artist, and not a pop musician — and that’s the way we approach the film, with that kind of perspective.”

Brian Wilson: Long Promised Road is told through a myriad of never-before-seen archival footage and photos from Wilson’s past, multiple interviews with musicians influenced by Wilson from Bruce Springsteen to Nick Jonas, and intimate conversations between Wilson and his longtime friend, Rolling Stone editor Jason Fine.

Various news outlets throughout the Nashville area, including Lumination Network, were present on the red carpet premiere, where the documentary’s director and Fine were present.

Lumination also had a chance to speak with Wilson and Fine about Brian Wilson’s life outside of The Beach Boys and how those not familiar with his music could relate to the story of the film.

“Brian’s story is also a story of mental health, and it’s a story of someone who’s overcome so many challenges in his life,” Fine said.

“The notion that this guy who’s struggled with really serious debilitating mental health issues for so long, yet still achieve so much, still express so much — you know, Brian, I think, as a kid even he suffered and struggled so much — but the music is what helped him, and so he wanted to help other people through making music that would help.

I think that’s a beautiful thing that anyone could relate to.”

After the screening, The premiere concluded with Wilson and Fine answering questions about the film in a Q and A session with the audience.