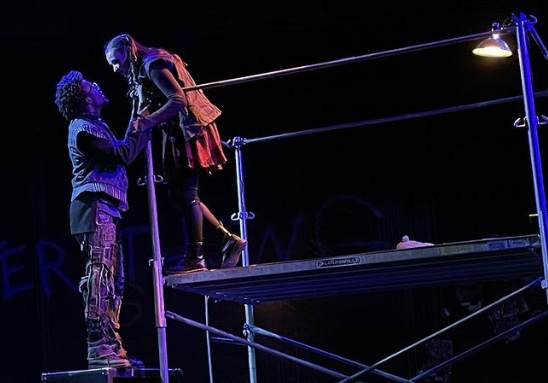 Soft pop and the whistle of coffee machines fill the air as students bustle through the Starbucks entrance. Baristas are hard at work making beverages for caffeine-hungry students, while others flock together to catch up with their friends between classes.

In the far corner seated in two leather chairs are students, Jakholbi Murry and Shelby Talbert, casually chatting. I sought out their expertise on a subject they should be well informed about. Shakespeare. Is he still relevant in modern culture?

“Yeah!” The duo exclaimed after stealing a glance at one another. The duo has been preparing for months for the performance of Romeo and Juliet, in which they play the role of the tragic couple.

“I think his stories keep getting pulled over and over because they resonate,” Talbert said. “They continue to talk about topics that are important to us and there are always new ways to reinvent them.”

Shakespeare was known and still could be considered the greatest dramatist of all time. The poet wrote over 150 poems and more than 30 plays that span a range of genres including comedy, romance, and tragedy. He continues to inspire creatives with his legacy. Such as Taylor Swift’s “Love Story” inspired by Romeo and Juliet and The Lumineers’ “Ophelia” inspired by Hamlet. Disney’s The Lion King is also paralleled by Hamlet and the classic rom-com 10 Things I Hate About You is loosely based on Shakespeare’s Taming of the Shrew.

“A lot of places see Shakespeare as the pinnacle of theatre, like, that’s what good theatre looks like,” Murry said. “I think it’s why so many places, all across the world, strive to be like Shakespeare.

Dr. Greg Carpenter, is somewhat of an expert on Shakespeare, as he has taught courses related to Modern American Literature, Creative Writing, and the notorious playwright himself.

“For the modern world, it seems as if Shakespeare has been ahead of us for a long time. Whenever we collectively embrace a new school of thought or see a new trend develop it’s almost as if Shakespeare was already there 3 to 400 years ago.”

Shakespeare’s plays could be considered his most enduring legacy due to its timeless message about love, life, and making difficult choices.

Nat McIntyre, assistant professor in the theatre department and director of Lipscomb’s production of Romeo and Juliet believes Shakespeare’s work is a gateway to discussing immortal themes.

“For lack of a better term, you can be a little bit subversive with Shakespeare,” McIntyre said.

“You can really ask some tough questions that may be tougher to ask with contemporary language. It’s also a really great way to examine cultural constructs and political constructs in a way that doesn’t alienate somebody who’s actually in those contracts. Not only is the language fantastic, but the themes just sort of like they keep creeping up in our society, that doesn’t change. So it’s great for us to shine a light on those.”

McIntyre and his cast will shine an edgier light on Shakespeare’s most famous romance as Romeo and Juliet find love in the 80s, an era of protests, punk, and grunge.

“How do we set it in a way that will allow them to be themselves but still play these parts that are older or are different and I love the turn casting on its head a little bit of Shakespeare too and, and not just do it traditionally. So what we did was we decided to set it in like a punk club in the 1980s.”

When developing his vision for Romeo and Juliet, McIntyre said he talked to his students and discovered one thing they all had in common: they were troubled by what was going on in the world around them. For McIntyre, drawing inspiration from punk culture was the solution.

“The message in the play goes along the lines of love and loving others.” Murry said.

Campus reception for Romeo and Juliet has so far been positive, Saturday night’s performance was a sold out show.

Romeo and Juliet will be held in Shamblin Theatre through April 16. Cover Photo via @Lipscomb_Theatre on Instagram, by Elle Rock.