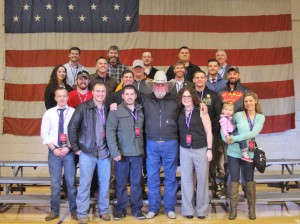 Although Tuesday began with the chill of unexpected snow flurries, it ended with Charlie Daniels and a group of his high-profile musician friends heating up Allen Arena.

The program allows post-9/11 military veterans, as well as their family members, to pursue undergraduate or graduate degrees from Lipscomb, either tuition-free or at greatly reduced costs.

All proceeds from the concert go towards the scholarships of the more than 200 Yellow Ribbon students at Lipscomb.

“War was very real to me,” Daniels said, “I realized that only two things protect America, and that’s the grace of God and the United States military. It’s that way then, it’s that way now, and as long as there’s an America, when these folks go and lay their lives on the line for us and come back, we owe them.  I don’t view [the concert] as something glorious that I do, I view it as it is my duty.”

Lipscomb students, Nashville music fans and a flurry of other folks poured into Allen Arena to see Daniels and his band, Kellie Pickler, Clint Black, The Grascals, Lee Greenwood, the U.S. Navy Band Sea Chanters and the American Hitmen.

The host for the night was Music City broadcast personality Storme Warren, described as the “Dick Clark of Nashville” in a profile by The Tennessean morning newspaper.

Director of Veterans Services Jim Humphrey, a retired Air Force lieutenant colonel, provided the invocation. Humphrey, also associate dean of students and the head of Lipscomb Security, will be leaving the school at the end of the month.

With the crowd already roaring, Daniels hit the stage with his fiddle in hand and launched into his 20-minute set.

“From my performance, I want the audience to be entertained,” Daniels said. “I want people to walk away saying ‘I had a great time, and we’ll be back next year.’ The important thing I’d like them to take away is what we’re involving. We’re raising funds, but we’re also raising awareness that there’s a need.”

In addition to raising awareness and funds for a special program, the annual event has another big payoff for the veteran performer from Mt. Juliet, just outside Nashville.

“What keeps me in this business is my time on stage in front of people, so I am ecstatic to be there.” Daniels said. “I will enjoy every second of the whole time I’m up there, so that’s the high point of my evening.”

All three surprise guests joined Daniels and his band in a rousing rendition of the legendary fiddler’s most famous song, “The Devil Went Down to Georgia.”

Daniels and his band also played a medley of their biggest hits, and each member was  allotted time for a lengthy solo jam session with their instruments of choice.

Pickler began her two-song set with a brand new single titled “Closer to Nowhere.” Pickler also performed “Red High Heels,” the first single that was released after her competition on season five of American Idol.

“We do a lot of work with soldiers,” said Greenwood. “We’ve done over 30 USO tours, starting when I was 14. I recognize the sacrifice of the military, so I think we can help.

“This is a particularly interesting and unique opportunity for veterans, where Charlie Daniels has put together this organization, this approach to come back to an education and give them the chance. Every one of them deserves a chance to get a good education and to get a degree or some kind of job.”

The Grascals, who annually join Daniels for the concert at Lipscomb, once again brought their bluegrass stylings to center stage as the first multi-song performers of the night.

“Well, we’d go dig a ditch for Charlie right now because I think he’d dig a ditch for us,” Grascals guitarist and vocalist Jamie Johnson said. “And on top of that, we’re supporting the troops, and my father was a Green Beret.”

He said two other members of the band also have fathers with military backgrounds, “so we’ve been around it since day one. The very first song we ever recorded was called ‘Me and John Paul,’ which is about the military.

The American Hitmen, who met in 2004 while Marines in Iraq, dedicated the first song of their performance to all fallen veterans.

As veterans, the Hitmen know the struggles faced by those who leave the warfront for the homefront.

“When you get out, you kind of flounder a little bit, trying to find your place,” band member Tim Cord said.

“Definitely scholarships like this, the GI Bill program as well, are huge. It makes you utilize those skills to find your place in the world, because I don’t think civilians really understand what we’re doing in the military.”

“The fact that the university and Charlie Daniels make awareness of, ‘Look, this is how it works, this is what you can get, what you can’t, and we’ll help you out with it.’ I mean, that’s huge,” band member Dan Cord said.

“What the university and Charlie Daniels are doing is very humbling for the troops. To take part in this day is very special.”

After the American Hitmen performed, emcee Warren introduced a video that shared the story of Lipscomb student Stacey Greer.

Greer’s husband died while serving overseas, and she was able to attend Lipscomb thanks to a generous donation from Copperweld Co-CEO Joe Longever and his wife Mercedez.

Greer and her son Ethan were brought out on stage to a standing ovation from the crowd.

At the show’s close, Yellow Ribbon students joined the Charlie Daniels Band on stage to sing “Amazing Grace,” with the legendary fiddler urging the audience to sing along on the chorus.

“We started with a handful of students, and it’s gratifying to see them being able to kind of jumpstart their dreams.” Daniels said. “I want people to understand what we’re doing here. This could not happen if it was not for the cooperation, the generosity and the patriotism of the people here at Lipscomb University. This is a fine university, I mean, education here means something.

“My hat is off to Lipscomb University. I couldn’t imagine working with another educational group that would be any better or probably even as good as these folks are here. They’re really into this program. I mean, the very top people in this university are in this program.

“They instigated it. They believe in it, and they’re sustaining it.”