CONTAGION gets under your skin (in a good way) 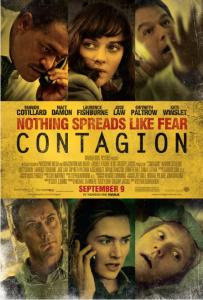 If you choose to see Contagion this weekend, you might consider bringing a travel size bottle of hand
sanitizer. You can thank me later.

Contagion joins the league of “possible disaster scenario” films. In a very straightforward manner, the film examines what would happen if a new strain of virus was to hit the human race. The story follows a few key individuals and their experiences through the state of disaster that the virus causes.

Remember the Swine Flu scare of 2009? The situation created in Contagion takes that indecency and
makes it look like a schoolyard scuffle. Director Steven Soderbergh has crafted a smart, engaging, and at
times, all-too-chilling look at a world in hysteria.

Plot-wise, we are given a multi-storyline layout. Matt Damon plays a grief-stricken father who, alongside
his daughter, must endure the hardships of the disease when his wife (Gwyneth Paltrow) and stepson
succumb to the disease (a few of the first to do so). The film also follows Laurence Fishburne as a CDC
official who works alongside Kate Winslet’s doctor character to stop the spread of the disease state-
side. Marion Cotillard (Mal from Inception) plays a foreign doctor who has her own storyline I won’t spoil here. Jude Law also has a large role as a conspiracy-theorist/blogger who gains a large following once the disease breaks out. Another storyline follows a team of researchers who search for the cure.

The cast in this film features many A-list talents, but don’t be fooled. This is not a film that showcases its stars frequently. Soderbergh wisely lets the narrative use the characters as it must, even if it means killing off a central talent in the first fifteen minutes. I say all that to say the cast does a fine job with the roles they are given. I loved Law’s determination with his character, and Damon’s subtle performance carries more weight than you might think. Fishburne, in perhaps the film’s biggest role, does get moments to shine. While at times it appears pointless to cast such huge talents in otherwise small roles, the viewer must let the film run its course. This is the kind of film where in reality, less is more.

Scott Z. Burn’s screenplay wisely forgoes any sort of disaster film clichés and takes a meditated
approach to the story. The film does not have any jump-out scares, but the film itself is the scare. It’s the type of film that will leave you strapped to your seat looking around at anyone who might be fighting a small case of the common cold. The sense of urgent paranoia is explored, and the audience is given a look at what our nation might look like if a major disease were to attack major cities. It’s not a world I would that I would want to live in.

The score effectively enhances the experience of the film, which is the best word to describe the final product. Contagion is an experience. I know that this film will not be for some (the type of person who can’t stand a more subtle, careful approach to film-making), but if you are in the mood for an engrossing, thought-provoking drama, then look no further. Contagion is a hypochondriac’s nightmare. Contagion is also one of the better disaster films in recent memory.