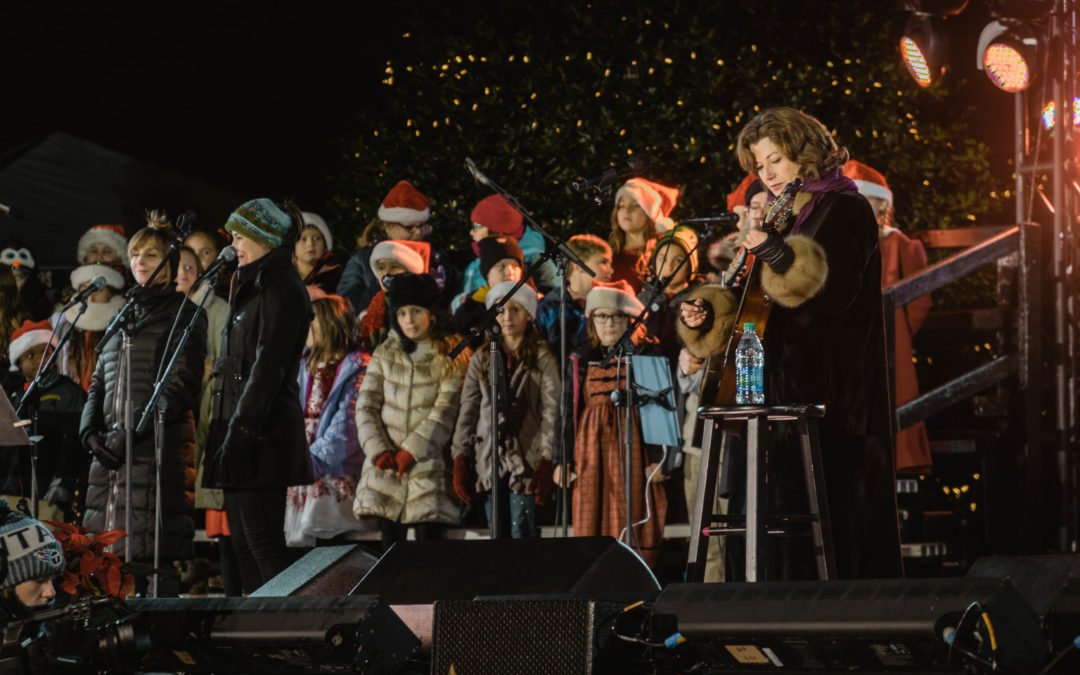 Despite freezing temperatures, Amy Grant, Drew and Ellie Holcomb, Daves Highway and more carried on, spreading Christmas cheer to the Green Hills community with the annual Lighting of the Green concert on Lipscomb’s campus.

Grant hosted the event, which also featured choirs from Lipscomb University and Lipscomb Academy, and Ensworth’s a capella group.

The campus was filled with Christmas lights, but the “lighting of the green” was saved for the end of the show. The Merry Marketplace in McQuiddy Gym featured pictures with Santa, booths by Pi Delta, AWL (Associated Women for Lipscomb) and more.

AWL founding member Mary Nelle Chumley worked the AWL booth tirelessly all night. Chumley has served Lipscomb for nearly 70 years, graduating from the Academy and then going on to major in art at the University. She will turn 90 next spring.

“Lighting of the Green was started several years ago by Dr. Lowry, and it’s been a very popular winter event, and it draws quite a crowd every year — this year it’s very cold,” Chumley noted. “So people have been coming in here to our AWL booth to get warm.”

Chumley said she thinks the reason Lighting of the Green has been such a success is because it draws in so many people due to the community Lipscomb helps foster.

“So many people love Lipscomb and have gone to school here,” Chumley said. “They come and the neighbors come, and so it’s just a popular thing.”

Throughout the night, songs such as “Deck the Halls,” “Tennessee Christmas” and “All I Want for Christmas is You” filled the air. At the end of the concert, all of the Lipscomb community present joined in to sing “Silent Night.”

Payton Dishman sang in the Lipscomb University choir on the stage for the third year in a row this year. Although he did note he was quite cold while performing, getting to be on stage with Grant to kick off the Christmas season made it worth it.

“Every year I look forward to doing Lighting of the Green,” Dishman said. “It is what I think symbolizes the beginning of the Christmas holiday for students at Lipscomb. It’s just really a joy to be up there with Amy and everything.”

The annual Amy Grant scholarship was awarded to commercial music major Devin Badgett. Badgett said he hopes to make music that gives people hope and a reason to get up every day.

He’s currently working on his second record, and he has also done work at Grace Point camp.

“There’s this term called the “Thin Place,” Badgett said after accepting his award. “It’s something we talked about in Bible last year, and it’s about when you’re in a place where you feel like the veil between Heaven and Earth is very thin, and I think that Grace Point is just a lot of really incredible people who do their best to make everyone feel very seen and loved, and I think that’s what we’re all here to do.”

The tradition regarding the actual lighting of the tree was slightly different than in years past. Rather than lighting a tree where the crowd could see it in plain view, Lipscomb placed the tree on the quad and a screen projected on the stage showed the lighting of the tree after the captains of the men’s and women’s soccer teams pressed a button on stage to light it.

Lowry also called the audience to give to Second Harvest Food Bank. Lipscomb pledged to give up to $2,500 to match the giving Tuesday night, up to $5,000 total.

“You know we’re out here in the cold — there’s people out in the cold tonight — you get to go home; you’ll be warm and you’ll have something to eat, and some of them will not, unless you help us.”