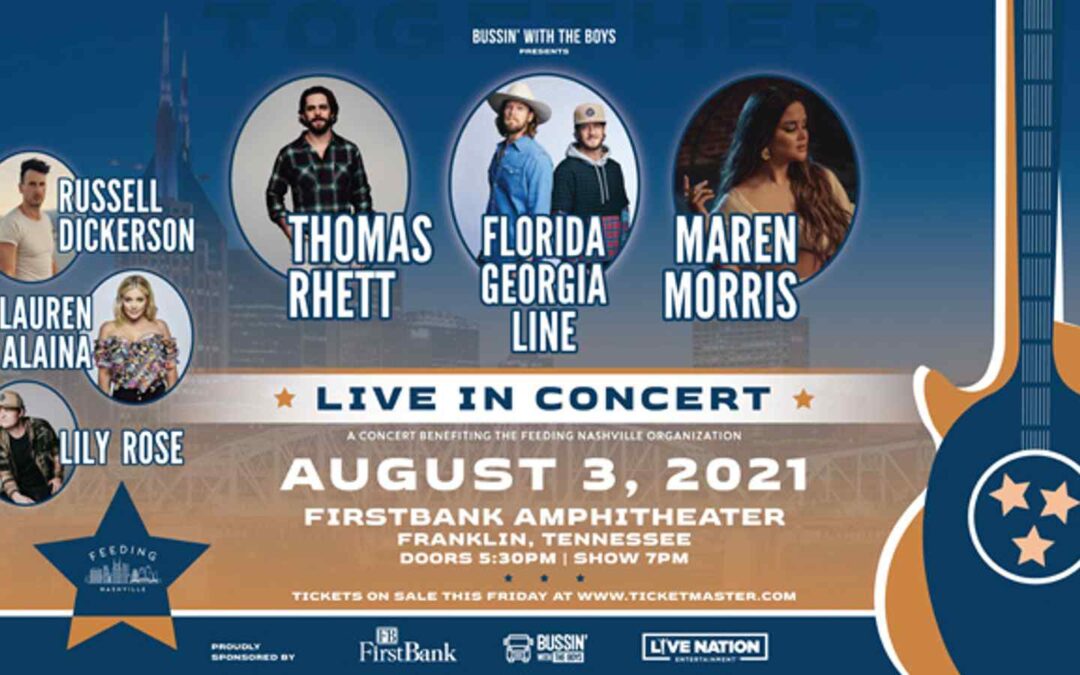 Country star and former Lipscomb student Thomas Rhett will be among a star-studded bill of young country hitmakers for “Together: Feeding Nashville,” a benefit concert targeting food insecurity that will be staged August 3 at FirstBank Amphitheater in Franklin.

The benefit concert, presented by Bussin’ With The Boys — the podcast featuring Titans offensive tackle Taylor Lewan and linebacker Will Compton — will be a one-night event to raise funds for the nonprofit that focuses on food availability for those in need.

Rhett, who studied communications at Lipscomb before putting his studies away to focus on his music career, landed his first No. 1  single with 2013’s “It Goes Like This.”  Since then, Rhett has released five studio albums, headlined four tours, and was nominated for several music awards from the Billboard Music Awards to the Grammy Awards.

Other hits have included “Look What God Gave Her,” “Marry Me,” “Crash and Burn” and “Die a Happy Man.”

Morris has had such hits as 2016’s Grammy-winning “My Church” (best country solo performance), “I Could Use a Love Song” and “The Bones.”  She also is a member of country/americana supergroup The Highwomen along with Brandi Carlile, Amanda Shires and Natalie Hemby.

FGL recorded the best-selling digital country single of all time, according to SoundScan, with 11-times platinum breakout “Cruise.” Tyler Hubbard and Bryan Kelley — the members of Florida Georgia Line — have been on a hot streak since their 2012 debut.  Their collaboration “Meant to Be” with Bebe Rexha spent 50 weeks on Billboard’s Hot Country Songs chart and went eight-times platinum.

Others on the bill that’s loaded with the best in young country include Russell Dickerson (“Love You Like I Used To”), Lauren Alaina (“Road Less Traveled”) and Lily Rose (“Villain”).

Feeding Nashville has “prepared and delivered 27,560 individual meals and 9,020 family meals” as well as fed “64,915 essential workers, at-risk students, individuals experiencing homelessness, and families in the Nashville community” since April 2020, according to its website.

This will be the inaugural concert for the Franklin amphitheater. Gates open at 5:30 p.m., with the show to begin at 7.

Tickets are available for purchase on Ticketmaster with prices starting at $41.50.