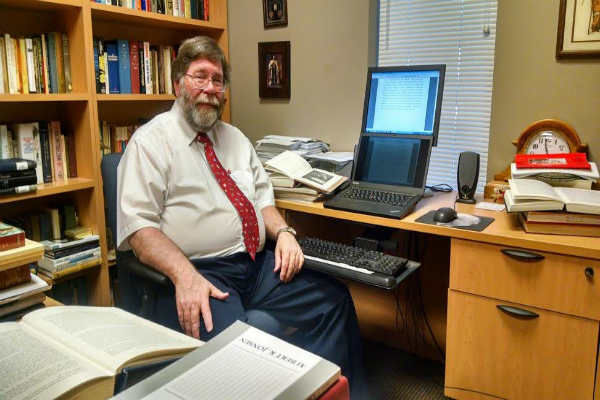 After generating an idea almost 40 years ago, Dr. Jerry Gaw of the Lipscomb Department of History, Politics and Philosophy prepares for the completion of a laborious literary project.

His coming book focuses on how David Lloyd George’s Church of Christ background influenced his politics while he served as Prime Minister of Great Britain during the First World War.

“I first learned that Prime Minister David Lloyd George was a member of the Church of Christ in 1979 when I was in graduate school,” Gaw said. “I did not get to start research in Britain until 1994 because that’s when I received a grant to do so.”

Since that initial 1994 grant, Gaw has only been able to travel overseas for research three other times.

After years of compiling and writing, he hopes to be able to send his first draft in for publishing no later than March of 2016. From then, Gaw said it should only take a little over a year before the final product is out on the market.

“I have published a book about Joseph Lister and antisepsis, which was my dissertation subject.  The final book I wrote came out in 1999 though,” Gaw said. “Everybody ‘ought to have at least one book in each millennium I think.”

Gaw’s working title for his unedited 500-page piece is David Lloyd George and the Politics of Religious Convictions.

The book will revolve around Lloyd George’s writings and policies that allude to his upbringing in the Church of Christ and his various social and economic convictions that seem to be results of his religious affiliation.

“When I first started doing research in 1994, the librarian in Wales told me he didn’t think I’d find anything about his religion so I was a little discouraged, but I have found from diaries and letters all kinds of things about his religion,” said Gaw.

According to Gaw, every other Lloyd George biographer has only mentioned his religion in passing and many have claimed he had very few principles and was an easily-swayed leader.

“From what I’ve found, none of that really assesses him at all,” Gaw said. “In fact, my book is going to be such a different interpretation that that might actually hurt the publication chances because it is going to be totally contrary to what practically all others have been saying for about a century.”

Gaw also mentioned a handful of other historic leaders who were brought up in the Church of Christ tradition, including James A. Garfield, Lyndon Johnson, Ronald Reagan and Lipscomb University’s founding father David Lipscomb.

“I do think there’s a similarity there between Lipscomb and Lloyd George,” Gaw said. “I think you can see a social consciousness and reformism, both socially and economically in several of these members of Churches of Christ who became leaders in the world.”