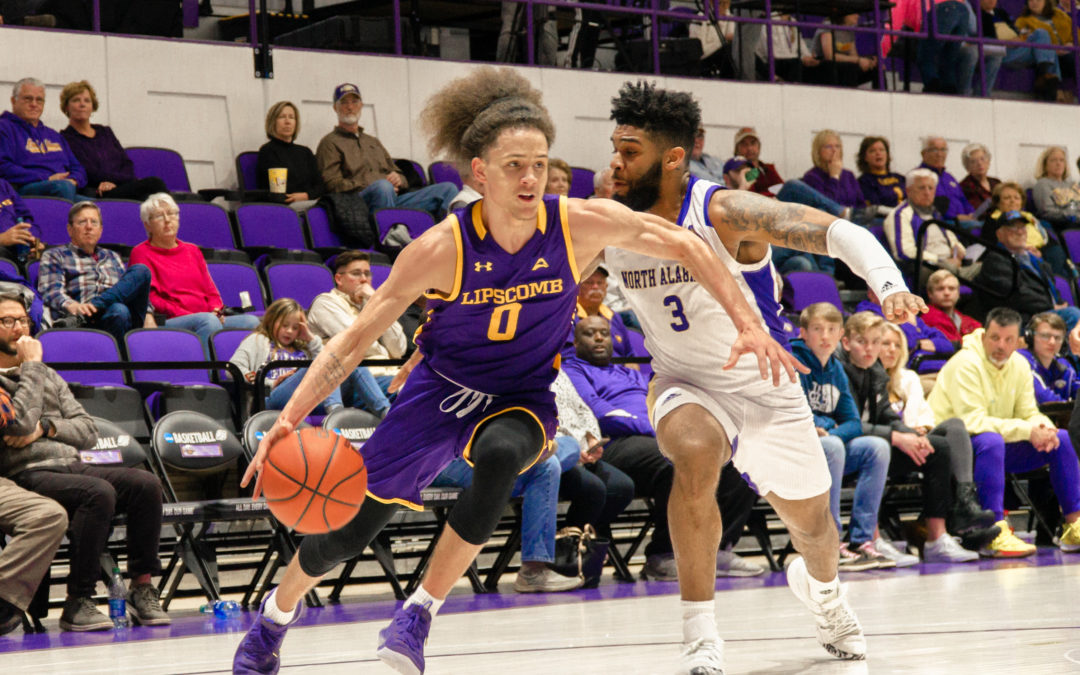 The Lipscomb men’s basketball team started conference play rocky this year. But the Bisons have now won two of their last three after an important victory over North Alabama on Thursday night.

The Bisons came back and either led or tied the rest of the way, but UNA had multiple chances to get a game-tying or game-winning basket in the final seconds due to missed layups and free throws from Lipscomb.

“I lost about three years off my life in that last two minutes,” Lipscomb head coach Lennie Acuff said. “But real happy for our team, and we deserved some good fortune, and we got a little bit tonight.”

The game was a return of sorts for Acuff, who had coached many games at Flowers Hall when his former team Alabama-Huntsville would play at UNA.

“That’s a pretty good night at the shop,” Acuff said.

Freshman guard KJ Johnson has struggled during conference play, but he scored 15, all of which came in the first half. Redshirt senior Andrew Fleming tabbed 13, while sophomore Greg Jones had 10.

The Bisons were slow coming out of the gate offensively, but they picked up the pace and led 22-15 after an Asadullah second-chance layup.

A three-pointer from Johnson gave Lipscomb a 12-point lead (39-27) with 1:32 to go in the half, and Littles made a layup with under 15 seconds left to give the Bisons the 10-point halftime edge.

UNA clamped down on defense to start the second half and tied the game at 44 at the 15:44 mark on a James layup. James Anderson later stole the ball on the backcourt from Michael Buckland and gave the Lions a 56-52 lead with 11:20 left.

Asadullah gave the Bisons the 59-58 lead on a second-chance layup with 8:19 to go, and they either led or tied the rest of the way. One of the most pivotal plays came with three minutes left when Asadullah rebounded a missed Jones three and fed the ball to Jones under the basket for the layup to give Lipscomb the five-point lead.

“Every time we needed a basket, somebody would step up and make a play for us,” Acuff said.

Despite some late free throw and layup misses, Lipscomb got the key stops it needed—and C.J. Brim’s desperation heave at the buzzer went off the iron making the final score 73-71 for a Bisons win.

“Other than [the late misses], we had a strong chin and were able to make some timely plays that were badly needed.

Lipscomb heads to Kennesaw State on Saturday at 3:30 p.m. You can listen to the game free at thebisonradio.com.