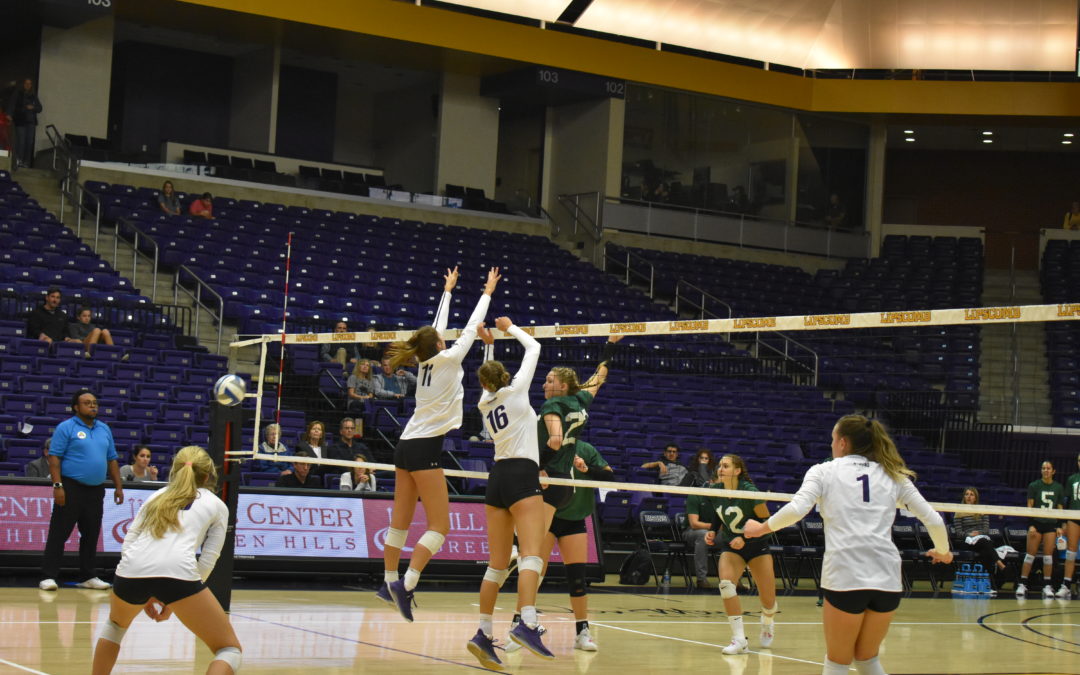 The Lipscomb volleyball team lost their six-match win streak to Stetson in an intense five-set battle in Allen Arena. The Hatters defeated the Bison’s 3-2.

“Our message all week was about how good Stetson is defensive. Even though you know it’s going to happen, they do a fantastic job,” said head coach Brandon Rosenthal.

The Bison’s got off to a hot start leading 16-6 early in the first set. The Hatter’s fought back to within two, but the Bison’s pulled out the first set 25-20.

Set two started out in a very similar fashion. Lipscomb had the lead 17-10. However, Stetson’s defense wasn’t going to give up easily. A quick surge tied them 17-17. After a hard-fought set, the Hatter’s secured the set 27-25.

“Set two was kind of weird. We just couldn’t get it done and unfortunately. I didn’t make a quick enough sub in a couple places, and they beat us down the stretch of set two,” says Rosenthal.

After also losing set three the Bison’s made a comeback in Set 4. They made an offensive surge to secure the set 25-23.

“Set 4 I thought we did a nice job, again, executing down the stretch wasn’t there, but that was the issue all day for us,” says Rosenthal.

Lipscomb got out early in the fifth set leading 4-0. They eventually took kept their lead 10-8, forcing Stetson to call a timeout. After the break, Stetson dominated and won the set 15-13.

“We have to learn from this, unfortunately. But, this is a special group and I would imagine we will take it a step further,” says Rosenthal.

Junior Megan Kuper led the offense as she had a career-high 22 kills. She also had 17 digs for her second consecutive double-double.

“Kuper has done a great job,” says Rosenthal. “She is the player we knew she was and she does so much for us. Today was one where we kind of got her going in spurts, especially in the fourth set when we were feeding her.”

Senior Morgan Elmore also had a stand-out day after she had a career-high 62 assists. She also added 17 digs and four blocks for her third straight double-double.

The Bison’s will be on the road for their next two matches. They will face Liberty on Halloween, on Thursday. Then they will face Kennesaw State on Saturday.

“This is what this conference is all about right now. It’s tough. No match is an easy one. We are going to have to keep grinding away, so for us, it’s one of those where we have to keep at it.”