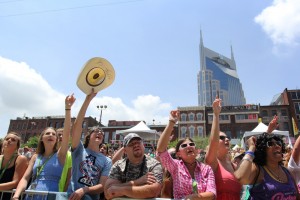 I am not a huge modern country music fan, but when I heard about the opportunity to be a photographer on the CMA Award of Merit Photo team, I knew had to apply.

I began shooting for Lumination during the second semester of my freshman year, and around the same time I started a semester-long internship at The Tennessean as a news photographer.

During my freshman year, I tried to seek out all the opportunities I possibly could. I saw shooting the CMA Fest as a great opportunity to meet new people, build my portfolio and just have a little fun this summer.

In short, I sent CMA my portfolio and soon heard back that I was accepted on to the team. There were five student photographers on the team, along with several other veteran photographers in the area to cover the rest. The team had a meeting about a month before the fest to see how things would go, and then June 5 quickly rolled around the corner.

When everything is said and done, CMA will pick the top student photographer who had the best overall images. That student will receive an award and have the opportunity to attend the CMA Awards in November.

The first day of the fest started out horribly for me. I had never been before, and I was completely clueless on all the locations. I arrived late for my first assignment and spent about an hour just trying to figure out where the CMA offices were in the Music City Center. I would go up to worker after worker, each of them sending me to a different worker who was supposed to know the answer to my question (but still did not). I was also overwhelmed by the amount of people crowding the streets.

Thankfully as the morning went on, things started going a little better. I was shooting various assignments for CMA, but in the back of my head I remembered to also shoot for myself. In the end what I wanted was not the award; I simply wanted to make some pictures worthy of going in my portfolio.

As day turned to night, I made the long trek over the Shelby Street Pedestrian Bridge to shoot at LP Field. This was my first time even being in LP Field. Walking through the tunnel to such a huge field with all the fans was such a crazy feeling. We all got to shoot in the photo pit, which was a rather enjoyable experience (most of the time shooting in the pit is a major pain). Each photographer in the pit, no matter who they were shooting for, was extremely courteous.

During the evenings I also got to shoot the press conferences. I have never really enjoyed sitting through press conferences, but these went by pretty fast, and when I heard that it was good work to put in your portfolio that kind of changed my mind. I learned to wait for the perfect moment when the artists are laughing or making funny facial expressions, instead of just snapping away.

After a long night, another early morning came. On the second day, I finally got the hang of things, plus the weather was nicer. The only down side to that was that it was so much hotter, and with all my camera gear strapped around my waist and shoulders, I was pretty sore just by the second day. It was well worth it, though. I got to shoot at the Riverfront stage on the second day. The crazy fans made for some interesting pictures.

I think the third day of CMA Fest was the day it all hit me. I was tired. I was sore. I felt a lack of creativity, too. I felt like I was shooting the same things over and over again. It was a true challenge to use a different set of eyes and to try to compose my pictures differently each day. I didn’t shoot as much on the third day, but despite that I realized something. I had completely gotten out of my shell.

I have always been super shy, especially behind the camera around complete strangers. At this point I was just walking right up to people and not feeling scared to take their picture. This was something I struggled with at my internship at The Tennessean, too. I was always scared to boldly walk up to complete strangers and snap a few shots. Even when I shoot familiar faces at Lipscomb’s events, it’s hard for me to get comfortable.

It’s still somewhat intimidating to photograph strangers. As a news photographer you basically creep on people with a camera without their permission. That’s scary. But it’s becoming easier for me with each experience like this.

The last day of CMA Fest was bittersweet. I was so happy to nearly be done so that I could catch up on sleep, but I was also very sad because CMA Fest was much more fun than I had expected. I love taking pictures, especially of concerts, and working as a photographer on the CMA Photo Team allowed me to do just that all day long.

The most memorable experience of the entire fest happened on the very last night, when Brad Paisley came out in to the crowd several times and took ‘selfies’ with all the screaming fans. It was a struggle for all the photographers, as we were nearly swarmed by all the fans, but I think I made a few decent shots out of it.

Most importantly, shooting the CMA Fest allowed me to meet some fantastic photographers and learn from them, all while expanding my portfolio. The challenges I faced during the fest will help me next year when I’m back in action shooting for Lumination and any other opportunities that pop up.