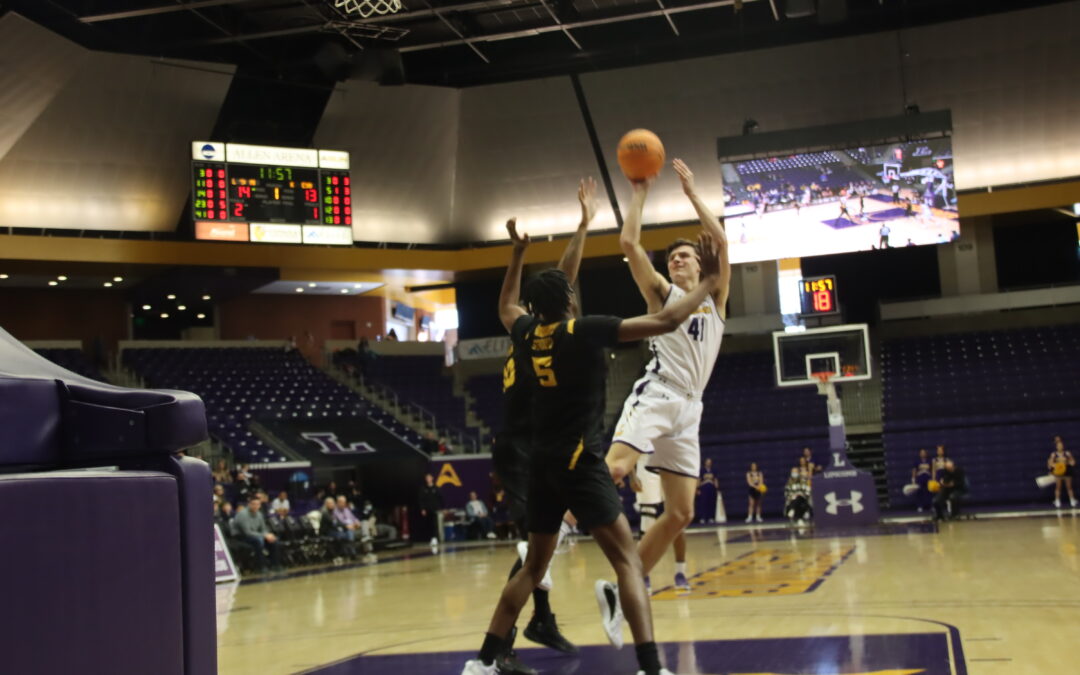 The Lipscomb men’s basketball team rid themselves of a 4-game losing streak in a 77-73 win over the Kennesaw State Owls Saturday afternoon.

A KSU team entering the contest at 3-0 in conference play fought hard, but the Bisons sported the balanced scoring attack that has characterized their ASUN games thus far.

Freshman guard Will Pruitt led the team with 18 points, 8 rebounds, and 5 assists. The Mt. Juliet native went 4-8 from the floor in 35 minutes.

Fourth-year center Ahsan Asadullah produced his sixth double-double on the year, scoring 10 points and securing a team-high 10 rebounds. Hailing from Atlanta, Georgia, Asadullah shot just 4-10 on field goals, but went 1-1 from the 3-point line and added 6 assists and 3 steals.

Lipscomb’s key to victory was their paint play behind a 38-33 rebounding advantage and 10 more points in the paint than the Owls.

The Bisons took 17 less shots than KSU, but their efficiency led them to outscore their opponents anyway. Lipscomb shot 51% from the floor and 40% from three, both percentages being above their season average.

Kennesaw State started lights-out from deep, knocking down a trio of 3-balls to help them to a quick 9-3 lead inside of 3 minutes played. The home team fought back to tie the game at 11 behind a pair of makes from deep by junior guard Greg Jones, and the game was back-and-forth from there.

Freshman shooting guard Trae Benham scored 8 first-half points en route to 12 points in a season-high 22 minutes. The Concord, North Carolina-born sharpshooter scored in double for the second straight game after putting up 16 in the Bisons’ previous outing at Eastern Kentucky.

Benham’s productivity off the bench helped Lipscomb weather a late KSU to take a 38-35 lead into the midway point.

In the second half, Lipscomb stayed effective across the floor offensively and grew the lead to 50-40 at the 15-minute mark when sophomore guard KJ Johnson scored on a drive to the basket.

KSU would whittle the deficit down to 2 with 8 minutes to play only for Lipscomb to make the lead 10 once more on a dunk from graduate forward Parker Hazen.

Pruitt made a jumper on the next possession to give the Bisons their largest lead of the game, and from there, the home team held onto their lead, to the delight of one of the largest home crowds of the season at Allen Arena.

The home stand lasts just one game this time around, as the Bisons cross state lines once again for their next outing Thursday at Jacksonville. The Dolphins host the Bisons 6 p.m. Central time before Lipscomb heads across town to play North Florida Saturday at 6 p.m. Central.

Lipscomb will take a 9-12 record and a 2-4 ASUN mark into their weekend in the Sunshine State, while KSU drops to 8-9 with a 3-1 conference record.