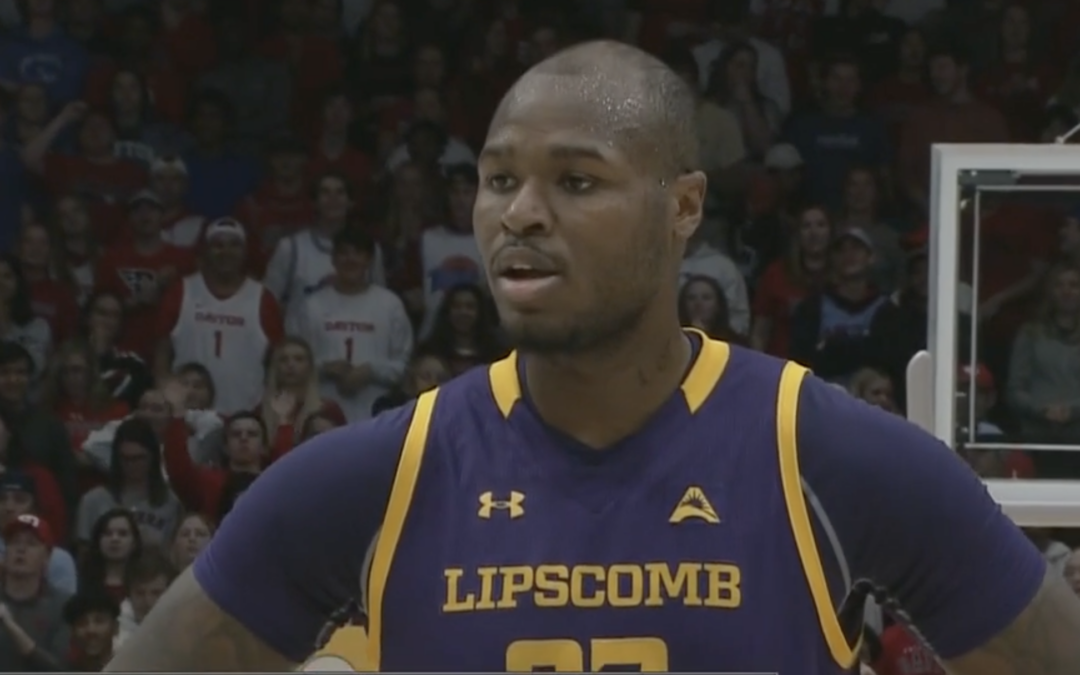 Over 13,000 Flyers fans crowded into the annual home of the First Four round of NCAA March Madness, and those sporting the red and blue of the home team were sent home disappointed by the visitors from Nashville.

The Bisons earned the first points of the game with a bucket inside from senior center Ahsan Asadullah, and the Lipscomb led from then on.

Asadullah, hailing from Atlanta, Georgia, ended the night with a team-leading and season-high 21 points along with 8 rebounds and 3 assists.

“Mainly, it was patience, just taking my time,” Asadullah said. “They’re really athletic, good shot-blockers. I knew all of them were going to be pretty strong and able to push me off the block, but not letting them rush me and getting the shots that I want was the main thing.”

Asadullah scored 12 points in as many minutes in the first half, pacing the Bisons offense with a 3-point dagger, four baskets inside the lane, and a free throw. His contribution led Lipscomb to a 10-point lead with 8:15 to play in the first half, and after both teams traded buckets in the remainder of the period, Lipscomb held onto its double-digit advantage with a 38-28 mark going into the break.

The Bisons shot accurately all night long, but were especially efficient in the first half, going 15-23 from the field for a 65% shot rate. Meanwhile, the defensive side of the ball was equally successful, holding Dayton to an equal 38.5% rate in both halves.

Alongside Asadullah’s strong outing on offense, redshirt freshman guard Tommy Murr was lights-out from deep, offering a one-two punch that Dayton proved unable to defend against. Murr was a perfect 5-for-5 from 3-point range, pouring in 15 of his 19 points on the night from downtown.

“Lately, but this season in general, our guards and wings have been doing a good job of making threes,” Asadullah said. “So I don’t think it’s just going to be a thing that’s here for now. I think it’s something that we’re going to have for a long time.”

After building strong momentum in the first half, Lipscomb only continued to produce more as the game went on, silencing the full and raucous crowd in central Ohio.

The Flyers had three players finish with 11 points each and mounted small comeback efforts, but they never stopped the bleeding defensively on a night where Lipscomb fired on all cylinders.

At the 10:49 mark, Dayton cut the lead to three off the back of two straight three-balls from Finnish forward Mustapha Amzil, but Lipscomb went on an 11-0 run to make it 69-49 and essentially ice the game with 7 minutes to go.

From there, the Bisons cruised, stretching the lead to as large as 23 with 1:19 remaining on another three, this time from junior wing Greg Jones. The Frisco, Texas-born guard scored 15 points on 4-7 shooting and 3-6 from deep in 35 minutes for Lipscomb. Jones came into the game with the most minutes per game on the team, and he once again played more than any other player in purple and gold.

Dayton scored the final four points, but it was not nearly enough on the evening, as Lipscomb will now make the 5-hour drive home to Nashville with a well-earned result.

“I was really proud of our whole team,” third-year head coach Lennie Acuff said. “I thought our guys were confident, I thought we were ready to play, and we got off to a really good start.”

“Every single person who played really did a nice job,” Acuff said. “It’s a great team win, and I’m really happy for our school.”

The Bisons improve to 4-1 on the year with the win and stay on the road Tuesday when they travel to Cookeville to face Tennessee Tech. Dayton drops to 1-2 on the year and lose their second straight home game.