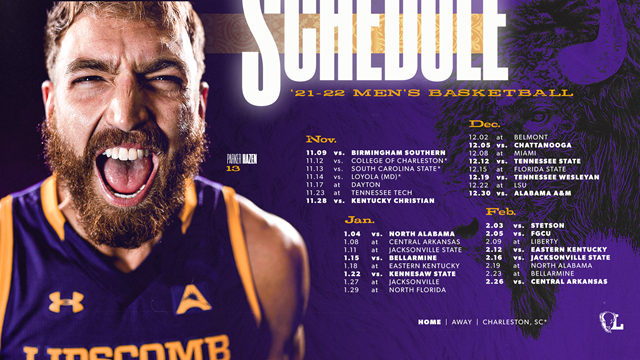 The regular season picture is clear for the Bisons basketball team after their full schedule was released Thursday.

The season opens at home on Nov. 9 against the Birmingham Southern Panthers, a Division III opponent that the Bisons used to regularly play during their time in the NAIA.

To close out the month of November, the Bisons face a Dayton team that appeared in the NIT last season on Nov. 17, neighboring Cookeville’s Tennessee Tech on Nov. 23, and NAIA member Kentucky Christian in a return home on Nov. 28.

December’s slate of games opens with the anticipated Battle of the Boulevard game versus the Belmont Bruins at the Curb Event Center on Dec. 2. Third-year head coach Lennie Acuff is still seeking his first win in this historic rivalry against the Bruins.

The home schedule for the remainder of the month sees Lipscomb host Chattanooga on Dec. 5, Tennessee State on Dec. 12, Tennessee Wesleyan on Dec. 19, and Alabama A&M on Dec. 30. The remaining December road schedule will arguably feature the team’s toughest competition all season.

On Dec. 8, the team will travel to South Beach to play the University of Miami Hurricanes. The Hurricanes played three ASUN opponents last season with a notable loss to FGCU, an opponent the Bisons split games with in regular season play last year.

The next road game will send the Bisons back to Florida to play the Florida State Seminoles on Dec. 15. Last season, the Seminoles finished second in the ACC and went to Sweet 16 in the NCAA Tournament.

The final non-conference road game for the Bisons will be against the LSU Tigers on December 22. Last year, the Tigers went to the Round of 32 in the NCAA Tournament.

Conference play will commence in January against North Alabama on Jan. 4. The conference slate will include games against all three new ASUN programs: Central Arkansas, Jacksonville State, and Eastern Kentucky. Their new programs help comprise a 16-game conference schedule.

Last season the Bisons finished the COVID-shortened regular season with a 15-12 record and were knocked out in the first round of the ASUN tournament by FGCU. This season, the Bisons plan to bounce back with a roster that features eight returners, including All-ASUN First-Team center Ahsan Asadullah. The team carries two transfers: freshman forward Jacob Ognacevic from Valparaiso and sophomore guard Jason Montgomery from Drury. The freshman class rounds out the roster, with center Grant Asman, guard Quincy Clark, guard Trae Benham, and guard Gray Weaver joining as true freshmen.

The Bison, Lipscomb’s student radio station, broadcasts every home basketball game and select away games live. Visit thebisonradio.com or download The Bison’s app on the App Store to listen live 24/7.