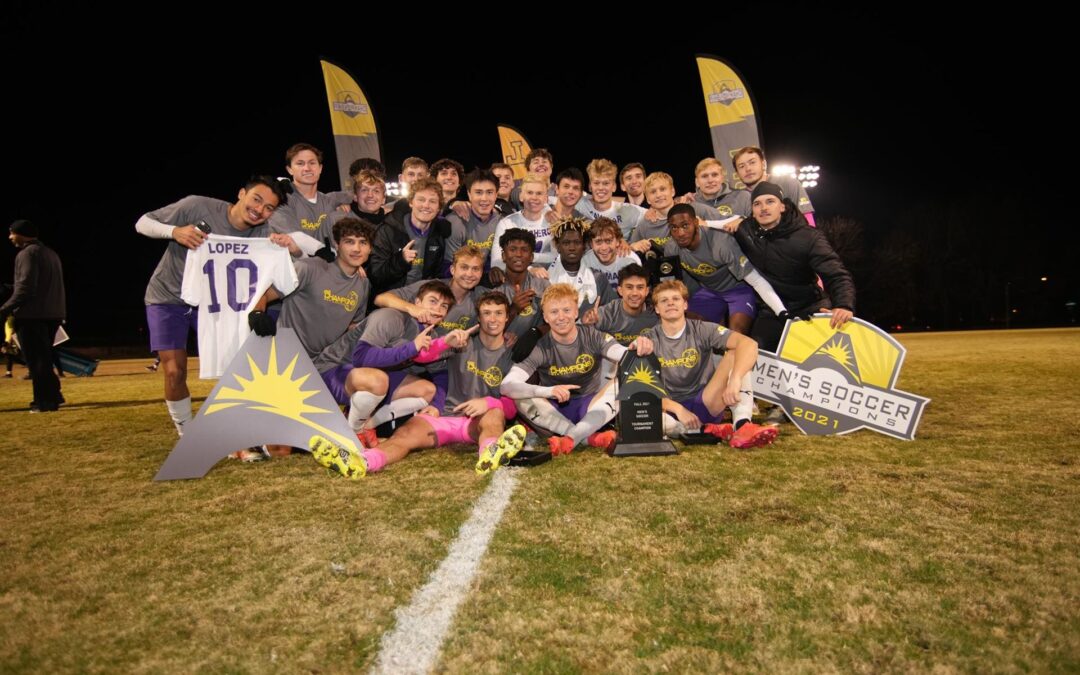 Two goals in each half gave the Bisons their third victory at home against the Bears in the past two years. More importantly, the win gives Lipscomb a berth in the NCAA College Cup, the Division I national tournament for men’s soccer, as ASUN Conference representatives.

Junior attacker Hayes Wood, a native of Chattanooga, Tennessee, scored twice in an integral contribution for the Bisons on the evening.

His first goal gave Lipscomb a lead they would never relinquish in the 28th minute. Sophomore forward Tyrece Spicer carried the ball down the right side of attack with purpose, and his cutback found Wood in the center of the box with a point-blank finish.

“It felt amazing,” Wood said of the game’s first goal. “Just gets the game set and gets some momentum going. It felt so good to get us on the board.”

The opener came mostly against the run of play, as Central Arkansas controlled the bulk of possession during the first 20 minutes of the match. Momentum quickly shifted towards the home side after the goal, though, and they converted that atmosphere into a second goal.

Spicer, a Trinidad and Tobago-born striker who came off the bench, provided the assist once again on another tantalizing cross from out wide. This time, Spicer’s service found graduate transfer Bakary Bagayoko, a striker from Bronx, New York, who joined Lipscomb this year after four years at NAIA program Cumberland. Bagayoko delivered from the edge of the six-yard box and put Lipscomb ahead 2-0 in the 35th minute.

That was the scoreline Lipscomb carried into the halftime break behind high-quality defending from Lipscomb’s back line. 4th-year junior Honore Kalala, a center back from Hobro, Denmark, was particularly up to the task in what is likely his final home match as a Bison.

“Coming into the game, we know that we had to battle to win,” Kalala, who also has citizenship in both Democratic Republic of Congo and Malawi, said. “We battled through the whole thing, so it definitely feels good.”

Despite an early setback in the second half when Alberto Suarez converted a penalty kick for UCA, Lipscomb never looked like giving up the lead they earned in the first half. The 53rd minute goal was only the second time junior goalkeeper Michael Sibley has conceded a goal in the last five matches for Lipscomb.

Although Lipscomb stayed comfortable in possession, UCA still held out hope with just a 2-1 disadvantage on the scoreline through the majority of the second half. Sibley made a total of 6 saves on the evening and faced 17 shots from the Bears.

The full crowd of Bisons fans had their nerves calmed in the 81st minute, when Wood struck again to put the nail in the coffin. Senior left back Louis Robinson delivered a low cross into the box that found attacking midfielder Alejandro Lopez, but the Costa Rican was unable to direct a shot towards goal. The ball fell through to Wood at the top of the box, and he powered it from the edge of the box and into the back of the net.

That 3-1 scoreline didn’t last long, as Lopez found a goal of his own just 26 seconds later. Sophomore striker Javanne Smith won the ball with high pressure just outside the box, but his shot from the right side of goal was saved. Lopez was on the opposite side of goal and perfectly placed to slam home a fourth goal on the night for Lipscomb.

The final eight minutes passed uneventfully for both sides, with the final result already decided. A picture of pure elation played out as the buzzer sounded, with Lipscomb’s sideline erupting onto the field to celebrate the team’s accomplishment.

After a record-setting 5 straight wins to start the year and an 18th-place ranking nationally midway through the season, the Bisons have seen highs and lows all year long. In the end, though, they achieved their main goal and can now pursue new ones.

“I think the guys really understand that just because you’re in a certain spot today doesn’t mean that’s where you’re going to be tomorrow,” 17th-year head coach Charles Morrow said. “They had this growth mindset all season; they came in and started great, and the guys knew at that point that that’s not the mountaintop. They stayed committed to getting better every day, and I’m really proud of that.”

“This year, I feel like the guys didn’t just buy into [our culture], they have complete ownership of it,” Morrow said. “Central Arkansas is a really tough team to play against, and we had to play a style that doesn’t really suit us, but tonight, we got it done defensively.”

With the win, Lipscomb advances to 12-2-3 on the year and will keep their postseason alive in the College Cup against an opponent still to be determined. The match will take place Thursday and could be a home or away match for the Bisons depending on seeding.

The team will find out who and where it will play in the first round of the College Cup 12 PM Monday with the NCAA College Cup Selection Show. The selection show will be broadcast live on The Bison, Lipscomb’s on-campus radio station.