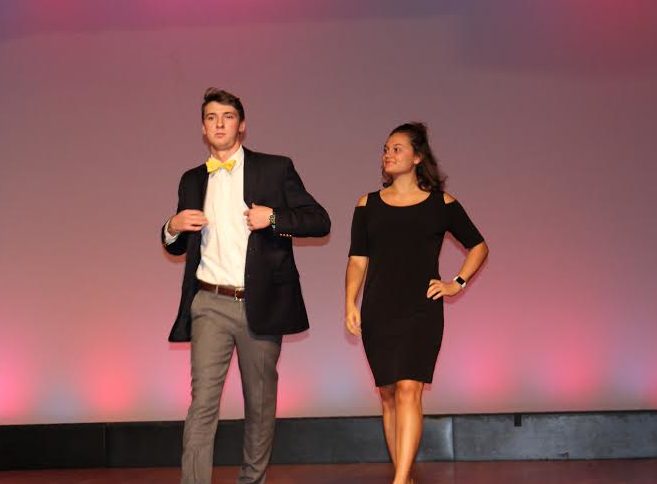 The students participating in the pageant raised money individually by getting donations in the student center and then performed on stage at the show.

Elizabeth Cluck, the philanthropy coordinator for Delta Omega, announced that the club had raised over $3,000 for the “Best Buddies” program. Last year, the club raised over $1,600.

“I was shocked,” Cluck said, adding, “also so excited and humbled and thankful that we could raise that money for such an awesome organization.”

Will Huff won both the Mr. Lipscomb title and the crowd favorite award, while Ben Warren and Ralston Drake tied for runner-up.

To start off the night, the candidates for Mr. Lipscomb came out in their formal attire and then proceeded to show the audience their Halloween costumes. Luke Shoulders came out as the Kool-Aid Man yelling, “Oh Yeah!” while Drake walked out as a lumberjack carrying “Brawny” paper towels. Jobane Stockard brought out some familiar dance moves as Michael Jackson.

The question round was the second phase of the pageant. Drake was asked what holiday he would create if he could.

“I would make a holiday called Blairsville Day because I am from Blairsville, Georgia, and I love my hometown,” Drake said. “We’d go bobbing for peaches.”

Fourthly, each contestant was asked to perform a talent. Warren did a math equation and showed the audience how two can be equal to one. Pageant-winner Huff performed an interpretive dance to Celine Dion music.

The IDEAL program at Lipscomb is a part of Best Buddies and facilitates it on this campus.

In between each of the pageant rounds, a Lipscomb IDEAL student would come on the stage and perform an act of his or her choosing. The performances included: a comedy routine, a Grease music performance and a re-enacting of a scene from Madea. At the end of the evening, all the IDEAL students and people apart of Best Buddies and/or IDEAL were honored on stage.

Cluck said she saw the event as a blank canvas, and she wanted to make sure to show to Lipscomb students how incredible of an organization Best Buddies is.

“The girls [of Delta Omega] are able to use their gifts to make it into what it is,” Cluck said. “It’s such an awesome way to showcase Best Buddies and the incredible organization that it is while showcasing the girls and how amazing and talented they are as well.”