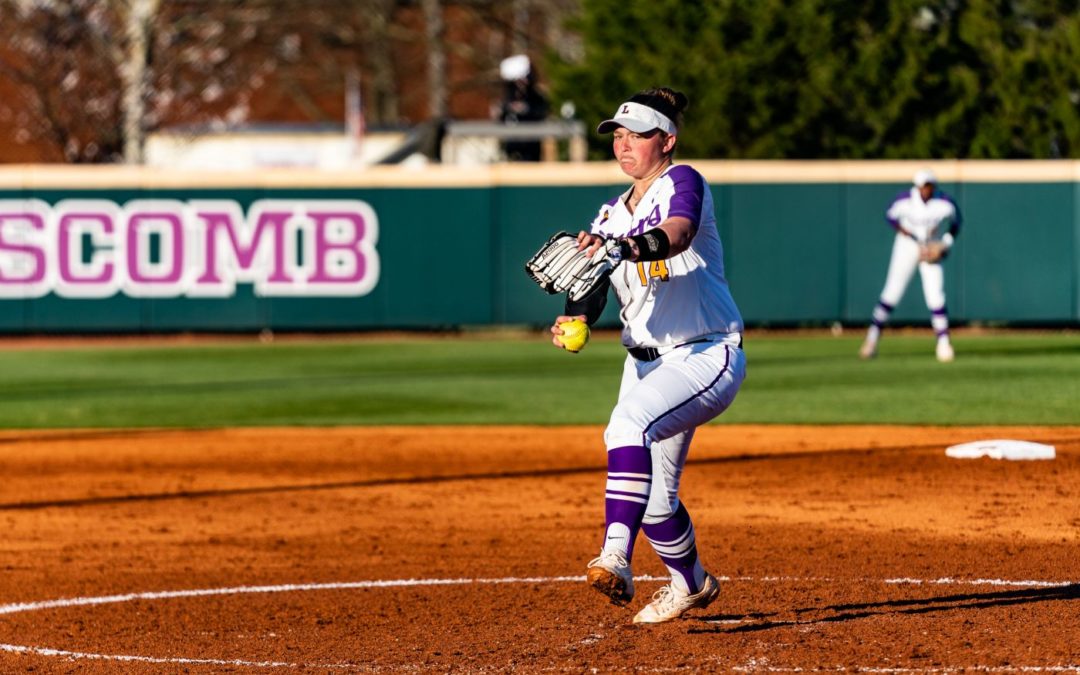 Twenty-one hours and two weather delays after it began, the Lipscomb softball team emerged the victors in the ASUN softball quarterfinal matchup against North Alabama.

Senior Mandy Jordan was on the mound all 12 innings, totaling 137 pitches, but letting no Lions score.

Due to inclement weather coming into the area, the ASUN elected to move all of Thursday’s tournament games up by an hour and a half, but not even the ASUN was prepared for the pitching duel between Jordan and North Alabama junior Megan Garst.

Nine innings into this Thursday morning matchup, Garst and Jordan had combined to allow only nine hits, and the score remained 0-0. In the top of the 10th, with two UNA outs and a runner on base, lightning forced the suspension of the game.

Shortly over 50 minutes later the game resumed. Although the delay was inconvenient, it caused no problems for either pitcher. Both pitchers returned to the mound without skipping a beat, extending the game into the 12th inning.

In the bottom of the 12th, the Bisons finally had a runner in scoring position with the opportunity for a walk-off win, but Mother Nature was not ready for this game to end yet. More thunderstorms rolled into Ft. Myers, pushing the rest of the game until Friday morning.

Thursday’s portion of the game lasted 9 1/2 hours, and it included 330 pitches.

Friday, all it took was one pitch. Just a few minutes after 7 a.m. Central, senior Sarah Higgins’ single drove Hannah DeVault home and advanced the Bisons to the next round.

The Bisons’ day was not over yet. After wrapping up this matchup, the Bisons still had to face the second-seeded Liberty Flames in an early afternoon semifinal matchup.

Junior Megan Gray took over for Jordan on the mound and continued her lights-out pitching, allowing no runs from her opponent. Gray was assisted in keeping Liberty off the scoreboard with some intense defensive catches, most notably, freshman LF Amy Vetula’s steal at the fence.

Offensively, the Bisons faced tough competition against Liberty senior pitcher Chase Cassady, who has a 1.31 ERA record this season. However, Lipscomb was able to capitalize on its speed and Liberty’s errors to bring home three-unearned runs and the win.

The win against Liberty marked the Bisons’ 40th of the season; a mark only achieved by the Lady Bison softball team two times prior under coach Kristin Ryman. Not only have the Bisons now achieved 40 wins on the season, but the NCAA RPI currently ranks them as the 40th best team in the nation, next to Power 5 teams such as Ohio St. and Wisconsin.

Lipscomb has the opportunity to add to their win total in the championship game at 10:30 a.m. Central Saturday and can be streamed on ESPN+.