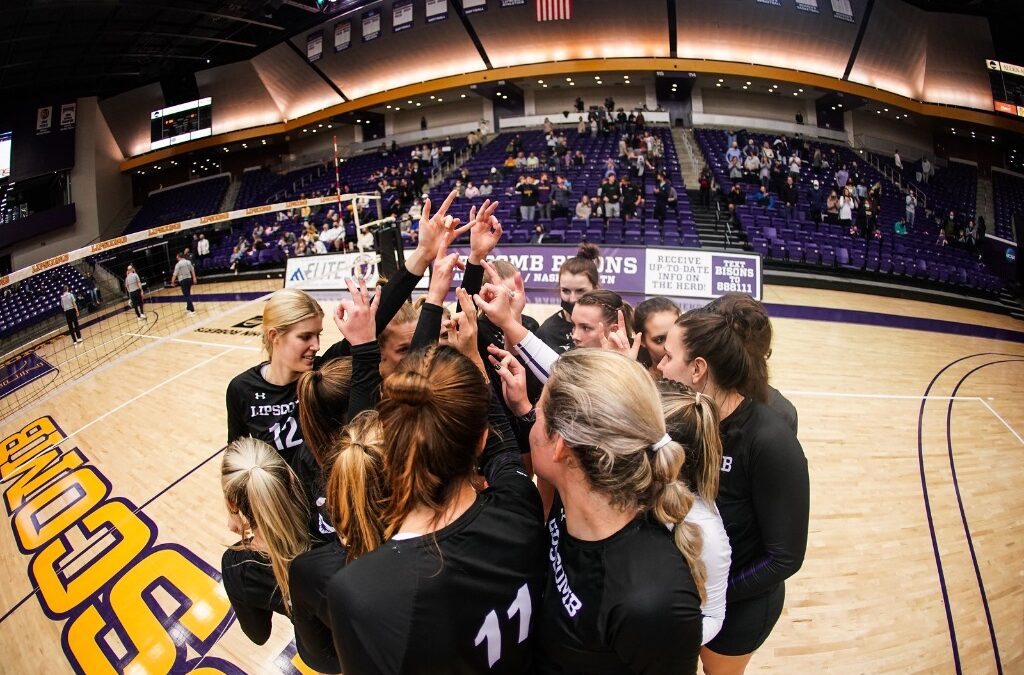 The Lipscomb volleyball team is coming off one of their more impressive seasons in recent memory, rattling off 17 wins and reaching the NCAA national tournament in Omaha, Neb. last spring.

Head coach Brandon Rosenthal’s side rarely rests on its laurels, however, the upcoming 2021-22 season is no exception. As the new season inches closer every day, what can Bisons volleyball fans expect this winter?

One area to watch in particular will be how effectively Lipscomb fills the gaps left by graduating players. The Bisons lose the services of four fearsome seniors from their ASUN title-winning squad, including 2-time All-Conference selection and 2021 All-South Region honoree Megan Kuper. The outside hitter from Olathe, Kan. was undoubtedly the team’s strongest source of offense, averaging over 3.3 kills per set.

Her attacking prowess will be missed, especially considering that 2.84 more kills per set are also departing with middle blocker Samantha Rubal. Rubal and Kuper often combined for a lethal 1-2 punch around the net, and their combined experience will not easily be replaced. Rubal, a native of Lewis Center, Ohio, also played in every single set for the Bisons last season.

On defense, the losses to graduation are just as significant. Libero Alyssa Zwolensky and defensive specialist Ashley Maher combined for a whopping 6.28 digs per set, often keeping points alive with impressive displays of athleticism. Zwolensky’s 4 digs per set average led the team, as the Rockledge, Fla. native led the back line for the Bisons.

All the departures paint a bleak picture for Lipscomb’s upcoming season, but don’t feel discouraged yet. For all the stars leaving, Coach Rosenthal brings back plenty of starpower as well. Brentwood-born rising senior Garrett Joiner figures to replace the scoring hole left by Kuper at the outside hitter spot after contributing over 1.6 kills per set in her 14 appearances during the season. Her 6’3” frame make her a handful to defend against, and she showed spurts of her potential last year as a rotation player.

Opposite of Joiner, Kamryn Bacus should be primed for a breakout sophomore season after impressing in her freshman year. Bacus played in 54 sets for Lipscomb last year and racked up 2.94 kills per set, and her numbers should only grow as she gains a bigger role in the squad.

The setter position is one that will enjoy plenty of continuity, as Austin, Tex.-born Delaney Dilfer returns for her sophomore campaign after a prolific freshman outing. Her double-digit average assists per set (10.38) were a big part of the Bisons’ success, but she also made a name for herself as a versatile player who wore many hats for the team. She recorded 38 kills of her own and also accrued 28 blocks, 16 aces, and a total of 112 digs defensively.

Helping to numb the pain of losing Rubal at the net will be fellow middle blocker Meg Mersman. The freshman appeared in 68 sets and delivered big minutes for the Bisons as she started alongside Rubal all season. Mersman picked up over 2.5 kills a set for the Bisons and was a big presence on both sides of the ball. The Maryville HS alum will be expected to step into a leadership role alongside whoever starts at middle blocker this season alongside her. Perhaps rising redshirt senior Rachel Murphy will get her chance to break into the starting lineup in her second season after transferring from New Mexico.

In addition to the returnees, Lipscomb has already inked two transfers to bolster the squad for another NCAA tournament run. Graduate libero Alex Spencer joins the team from the University of Virginia and will be immediately eligible to contribute for Coach Rosenthal’s team. Sophomore outside hitter Caroline Stogner joins Spencer as the other transfer for the Bisons, joining from the UAB Blazers in Birmingham. Hailing from Plano, Tex., Stogner will enjoy three years of eligibility with Lipscomb after tallying 54 kills in her eight matches last season. Her Blazers team gave Lipscomb one of just three losses all year long.

Incoming freshmen are expected to be announced soon as well, which will give fans even more clarity on how the Bisons intend to fill their roster holes left by impact seniors. What is clear already is that Lipscomb is spoiled with talent and will continue to be in 2021.