‘Ragtime’ sets the stage for thought-provoking musical theater at Lipscomb 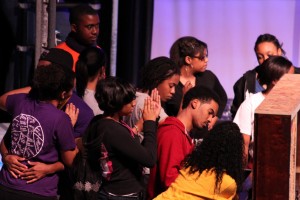 When Ragtime  — with its predominantly black cast — opens Thursday it will be something of a landmark occurrence for Lipscomb, according to those involved.

The curtain goes up at 7:30 p.m. for each performance of the play that begins this Thursday, Nov. 14, and  runs through Nov. 17 in Collins Alumni Auditorium. The tickets are $5 for Lipscomb students, $10 for faculty, $15 for the public. Tickets are available at the Lipscomb box office or via Ticketmaster.

Ragtime — based on the prize-winning historical novel by E.L. Doctorow –is a Tony award-winning play and perhaps the best-known contemorary musical featuring a mostly African-American cast.

“This is going to be the best production Lipscomb has ever had,” said Lauren Waller. “The play is fun, lively and a real tear jerker. It is one that everyone will enjoy.”

Ragtime mixes fact and fiction and takes place in the years 1900-1917 in, and around, New York City.

“What I love about the play is how Doctorow weaves the story of three sets of different people together to tell us a story,” Fernandez said. “In one way [it is] very hopeful, and portrays the essence of what it is to be an American. On the other [hand], it reaches the pit of despair as we see the dreams of some of these people dashed because of racial inequality.”

“Ragtime was written to open the eyes of many to remember life as it use to be in the old days. I think everyone will not only enjoy the play, but the music is awesome.”

Fernandez agrees that the music is as moving as the actual play.

“I think that every number is almost a showstopper, and you will want to just rise to your feet in applause after every number,” Fernandez said. “After one of the music rehearsals I was crying, because that’s how powerful this story is.”

Lipscomb students are also excited about this ground-breaking musical taking place on campus.

“Ragtime is not just a play, it’s more than just getting on stage and doing a musical,” said Phillip Hamilton. “It’s a personal and very powerful message that people should apply in their own lives to treat everyone equally.”

Christon Carney sees this performance as a stepping stone toward more provocative plays at Lipscomb.

“At the end of this musical we all come together as one to produce a beautiful sound,” says Carney, a vocal performance/music composition double-major.

The sophomore from Nashville brings Booker T. Washington to life in this play.

Carney adds: “If we all continue to work together as one we will always be able to produce something as beautiful as Ragtime.”