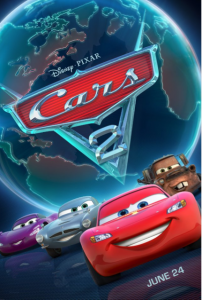 Hello faithful Redbox Report readers! The report has returned after a brief hiatus to fill you in on everything Redbox. As we are full way into the fall season (and Thanksgiving closer than we’d think), here is a film to consider and a film to avoid at all costs. I’m also going to share my thoughts on the recent price raise of DVD rentals. So, without further ado…

Admittedly, I was not the biggest fan of Cars 2.

So, you’re probably wondering…Why am I recommending that you give this film a go?

It’s not all terrible. I went with a group of friends to see the film its opening night, and the unanimous opinion was somewhat positive. I had high hopes for the film -being a gigantic Pixar advocate- but I considered the film a rare misstep that will hopefully fade into time with the studio’s feature releases. In retrospect, I was more disappointed in the film than I am to dismiss it. It’s not a bad film, just a poor example of excellence from the folks at Pixar. Due to my fearful bias, I’m making the rare decision to recommend you make your own mind up on the film solely to not ruin your personal view of Pixar. Rent Cars 2 if you have not already viewed the film, and feel free to share your thoughts/criticisms in the comment section.

Here’s something green that I would not want to touch with a thirty-nine-and-a-half foot pole. No, I’m not talking about Mr. Grinch. I’m talking about the Green Lantern. This poor adaptation of the popular comic book character fell with a resounding thud when I first saw the film this summer. The story is a mess due to a flat-out insulting script. Besides Reynolds’ fine performance as Hal Jordan/Green Lantern, most of the actors either are sorely mis-used or horribly miscast. Avoid this stinker at all costs.

I close this Redbox Report to address the recent twenty-cent price raise on nightly DVD rentals. While the “dollar-a-night” system seemed extremely effective for marketing purposes, the change is not a horrible move. It’s a relatively small jump that hopefully won’t put a large dent into your wallet. If anything, the new move will raise the urgency to get rentals back in on time before the price stacks up as time progresses. Companies have to make money, and if you think about it, a dollar-twenty still isn’t expensive for a movie rental.

If you’re in the mood for talking cars, ready to avoid green superheroes, or wondering about recent price changes, the Redbox Report has you covered. Join us next week for another installment.