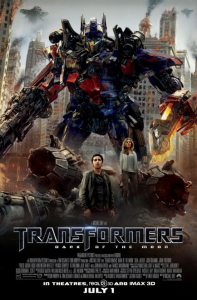 It’s hard to believe we are already within the final lap of September. As the month dwindles down, here are some Redbox choices to satisfy your film needs.

While I have a special spot in my heart for the first Transformers film, I have a special place in the trash can for Transformers: Revenge of the Fallen. I could go on all day on why the second installment just flat out reeks, but thankfully, director Michael Bay made up for the lousy second film with Transformers: Dark of the Moon. The best word to describe this film is insane. Bay and crew deliver some enthralling action sequences on top of a pretty interesting plot. The “cheesy” humor may be back, but it’s dialed down.  I totally recommend this film for fans of the series (yes, the 2nd film has a few fans) or for anyone who is just in the mood for almost two and a half hours of pure Bayhem (yep, that’s a word…kind of).

Even though this title was released on Redbox this past summer (and in theaters back during December 2010), I still want to bring it up while it’s still out. True Grit was one of my favorite films from 2010. The Coen Brothers (O Brother, Where Art Thou) have directed the second adaptation of the classic novel. The first adaptation, the John Wayne classic, was a somewhat-light, family film. The Coen Brothers adaptation takes a darker, more solemn approach to the subject matter, which works perfectly. Jeff Bridges knocks his role out of the park, and new-comer Hailee Steinfeld gives a powerful performance as Mattie Ross. Damon and Brolin also deliver. This is a well-cast, well directed film I highly recommend you rent this film while it’s still on Redbox.

If you’re in the mood for fighting robots or determined cowboys, we’ve got you covered. Be sure to tune in next week for more recommendations.