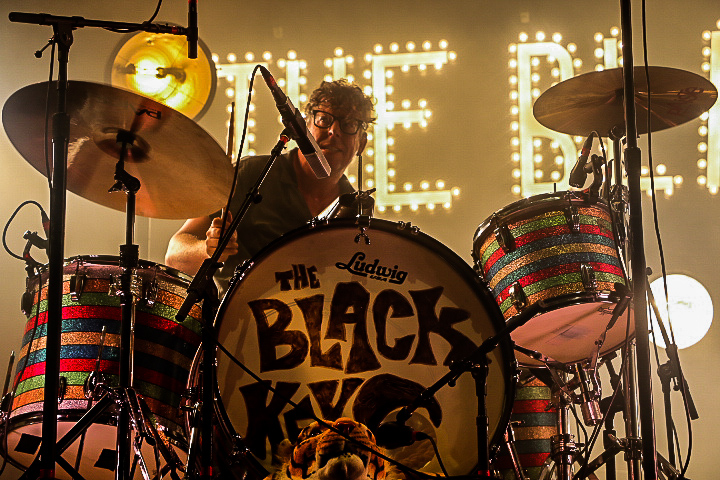 Photo: Patrick Carney of The Black Keys at the 2021 Pilgrimage Festival, shot by Hannah Cron

The first day back for Pilgrimage Music and Cultural Festival was an exciting day of great weather, excellent musicians, and the chance for a community to gather together for the first time in a long time.

The name “Pilgrimage” could not have felt truer as the day began with a mile-plus trek to the festival grounds. Some of the lucky ones bought parking passes through the festival, but for those like us, you better hope you had comfortable shoes.

Once waiting through security and ticket checkpoints we made it inside, where the festival was already alive with music and people. Most of the festival can be seen from the entrance.

To the right is the main stage where we would see The Black Keys, and the Gold Record Road Stage to the left where we saw Maren Morris that evening. The center is basically an epicenter for all things food, drink and shopping.

Of course, the first thing I checked out was the bathroom situation. There were several congregations of port-o-potties for those like us without VIP passes. They were in great condition when the day started but as more people arrived and the sun went down, they obviously did not stay that way.

I was fairly disappointed with the merchants as I saw too much tie-dye. Although I did not find anything I wanted, the shops stayed busy for most of the day.

Despite not being in the target demographic for the shopping, I definitely was for the music. The first two acts we caught were on the main stage: Katie Pruitt and Houndmouth, both musicians I admire.

Katie Pruitt’s set couldn’t have been a better start to the day. Her impressive and folksy voice was a calming yet entertaining hour that set a great tone.

Not only was I blown away by Pruitt’s talent and music, but she took several moments from her set to talk about some important and relevant topics. She addressed the issue of police brutality in an introduction before singing “Ohio” by Crosby, Stills, Nash & Young.

Pruitt was one of the only acts I saw on Saturday that talked about a political issue, which I found both brave and inspirational. She talked about growing up in the South and the need for change.

“The South and America need a refresh,” Pruitt said before beginning the song “Southern Roots.”

After remaining in the pit for Pruitt’s set we retreated to the area for blankets and chairs for the next several hours.

We listened to Houndmouth, Valerie June, and Better Than Ezra until the sun went down. The heat of the day was draining, making it almost necessary to spend time sitting if we wanted to make it the entire day. It was nice to have this option since you would not at many other festivals.

Once the set went down, the heat disappeared, but masses of people showed up. For Maren Morris’s set, everyone was packed in tight to hear hits such as “The Middle” and “The Bones”.

Morris has a musical style that blends pop and country, making for an upbeat performance that really excited the crowd. Morris’s son could be seen from the side of the stage, which she talked about in between songs.

Morris said that she was particularly emotional that night because of her family and friends who were there and because this performance was her last until she has new music.

After about three-fourths of the set, we went back to the main stage for the final act of the night, The Black Keys. The difference in audience between the two artists was very evident.

Morris’s show was filled with couples and girl groups dressed up while The Black Key’s audience was mainly men in their 30s wearing baseball caps and denim.

The pit was full of energy for The Black Keys’ rock set and went even crazier for hits like “Lonely Boy” and “Gold on the Ceiling”. When we left a bit early to avoid crowds, the entire hill was full. It finally looked like 25,000 people who had purchased tickets were there.

On Sunday, we got a later and more leisurely start to the day, though the leisure didn’t last for long! We arrived in the mid-afternoon and enjoyed four great sets back-to-back.

First up was Houston-based trio Khruangbin, a groovy group that serves as something like the American answer to Tame Impala. I could barely tell when one song started and the next began, but I didn’t care. I think it was what the kids might call “a whole vibe.”

The set wasn’t without complications though. Mere minutes into the show, paramedics arrived to assist an attendee having a medical issue. Despite the unfortunate disruption, Khruangbin played it off like true professionals and even took a moment later in their set to thank the medical and emergency response teams for their graceful handling of the situation.

Our second act of the day was Black Pumas, a soulful duo who were nominated for Best New Artist at the 2021 Grammys.  Singer Eric Burton was electric from the very beginning, jumping around the stage and interacting with the crowd. Their presence was both commanding and welcoming, inviting everyone into their music and hypnotizing them with their masterful music.

Cage the Elephant, the second-to-last band of the day, brought nonstop energy to the farm — pure fun and chaos. Shortly after some of the band members’ children came on stage to greet the crowd, frontman Matt Schultz bounced into view in a metallic jumpsuit and ski mask. I missed some of the set because I needed to eat, but I don’t think he or the crowd stopped jumping for the entire length of the show.

The festival culminated with a two-hour set from headliner Dave Matthews Band. By that point in the weekend, nearly everyone was visibly tired, but what looked to be a record number of attendees gathered to watch the band. The band clearly knew that this festival was something special. Dave Matthews came out waving to the crowd and each of the band members gave the set their all.

Overall, it seemed that every artist and person there was grateful for the opportunity to finally gather for live music again. Although people were excited about the music, the crown was relaxed, no one seemed in a rush to get anywhere, making Pilgrimage a great option for the non-festival music lover.