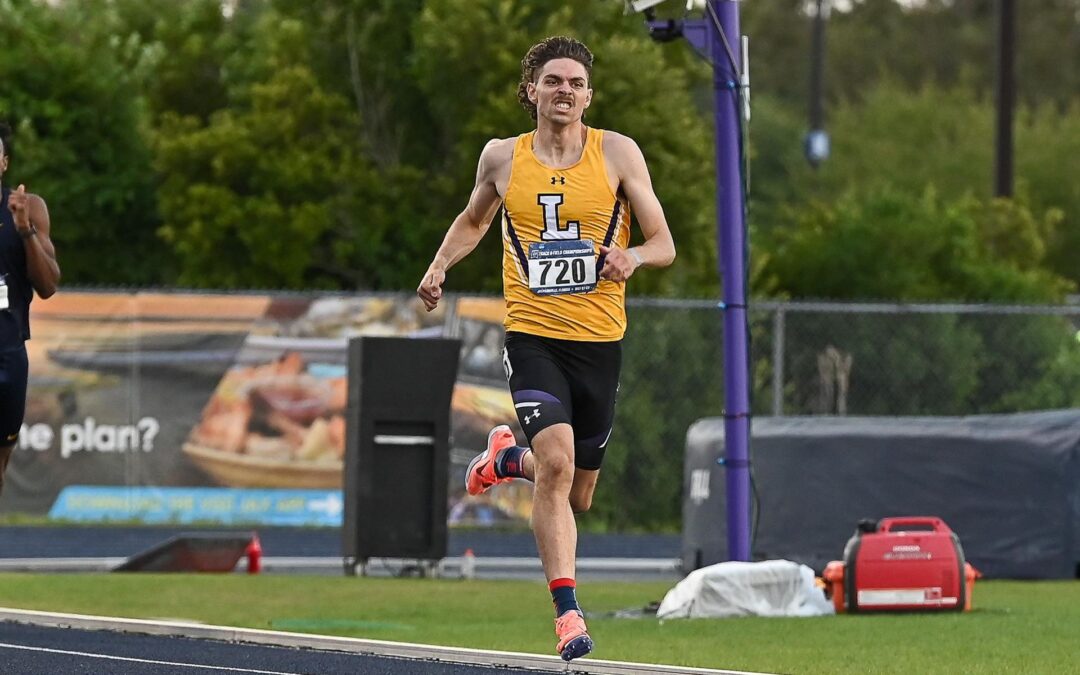 The past week has been electric for Shane Streich, Lipscomb Track and Field runner and first ever Lipscomb athlete to ever compete in a final at the NCAA Track & Field Championships. Streich recently spoke to Lumination about his record-breaking season and the exciting road ahead as a summer Olympics hopeful.

He said of his aspiration to represent the United States as an Olympian “entering the season, my goal was to make it to the national meet,”

“After that specific race, I not only gained confidence that I could compete at the national level for a potential NCAA championship; it [also] provided the much welcomed surprise of likely qualifying for my first Olympic Trials.”

Shane Streich has been nothing less than dynamic on the track this spring and summer for the Bisons. He recently carried that momentum where no Bison has gone before:  advancing to the final of a national championship track and field event, finishing sixth overall in the nation.

On the way, Streich set the school record for an 800-meter race and for a 1500-meter race. Further, he was named the ASUN Conference’s Men’s Outdoor Championship Most Outstanding Track Athlete.

Many, though, will not have known much of Streich’s story leading up to his moment in the spotlight Friday evening. Given that he’s a graduate transfer from Minnesota, that could certainly be forgiven, but a proper introduction feels necessary by now.

The highly-decorated track and cross-country runner isn’t just a gifted athlete; according to all around him, he also sets himself apart through his character and heart for God. Grace Oetting, the assistant coach of the Bisons’ cross-country squad (of which Streich is also a member) was quick to praise his character as an aspect of Streich that most people are likely unaware of.

“He had outdoor track eligibility from the [NCAA ruling to give an extra year of eligibility due to COVID-19] and came here [to Lipscomb] to use it,” said Oetting. “He is a strong Christian and gives all of the glory to God after his races.”

Streich shows his faith by no accident; it’s the result of an intentional mindset on the part of the Janesville, Minn. native.

“My faith has always been a critical part of my life, especially regarding athletics,” said Streich of the importance he places on faith in the context of his athletic abilities. “For me, athletics provides me with an opportunity to honor God through the abilities and opportunities that He has blessed me with. As a result, my faith provides my drive to be the best athlete that I can be and to give the sport my everything in order to maximize my God-given talents.”

Streich is aware he’s a quality runner, but he sports an overarching perspective that defines him much more than his speed ever could. “If I have a very successful year, that’s obviously awesome, but knowing that I ultimately compete for the Lord with the blessings that He has provided me helps bring humility and helps me stay grounded.”

The success he did have, though, shouldn’t be taken lightly. Streich’s performance was surprising even to himself, and it came out in an unexpected way.

“I would say that I was a little surprised by both the level of success that I had this season and the event that I had the success in. Entering the season, both Coach Polk and I believed that the 1500m was going to be my strongest event and trained under that assumption. Thus, my breakout performance in the 800m at the Virginia Grand Prix surprised both of us and changed our focus the rest of the season.”

That Virginia Grand Prix was on May 1, just two weeks before the ASUN Conference Championships in Jacksonville that started Streich’s qualification process. He posted a rapid 1:46.78 time that bested his personal record for an 800-meter event and weighed in as the third-best run at that distance in the entire NCAA season to that point. Such a blistering performance changed the runner’s strategy, and it would pay big dividends in the postseason.

Streich went on to take the gold in both the 1500-meter and 800-meter events, earning him a spot at the NCAA East Preliminary. His preliminary performance in the 800 was sufficient to qualify him for the NCAA Outdoor Track and Field Championships in Eugene, Ore., and his teammates were more than proud to see his dedication rewarded.

Junior Scott McKenzie, a fellow distance runner and fellow transfer student hailing from Melbourne, Australia, didn’t hold back in his praise for Streich.

“Shane is a phenomenal athlete, but is an even better bloke. He genuinely wants to push us to become better versions of ourselves. Shane is one of if not the best athletes to come through our program and has set our team up to continue his success for years to come. I am proud to call Shane a teammate and a friend, and I look forward to seeing his career flourish!”

McKenzie had a solid season in his own right, earning a sixth-place finish himself at the conference championships in the 3000-meter contest. He was more than happy to hand the limelight over to Streich, though, who he feels is fully deserving of the attention he’s received.

The team’s positive feeling towards Streich is mutual, though, as the Minnesota transfer still feels strongly that his relocation to Lipscomb was the best move for his career.

“I wasn’t sure if I wanted to return to school to exhaust my eligibility or move onto the post-collegiate racing scene,” Streich said. “After much thought, I decided I would return to school if the right opportunity presented itself. Thankfully, it did in the form of Lipscomb University,”

“The school fit me in every desired aspect and was everything that I was looking for. Athletically, I truly believed that I could perform at a higher level and knew that Coach Polk would be able to help me achieve my goals, getting the very best out of me every day. His coaching style, personality, and intentionality in training were exactly what I was looking for.”

Both school and student found the perfect match in their partnership, and despite the level of prestige Streich has achieved, he says he wouldn’t have traded Lipscomb for a larger, Power Five-conference school.

“Though Lipscomb is a smaller [NCAA Division I] university with limited resources compared to Power 5 schools, the team doesn’t let that fact limit the goals that they have for themselves and for the team. Each and every athlete shows up to practice each day hungry to better themselves and better each other, something which has truly inspired me throughout the year. For these many reasons, the team culture has been a perfect fit for me to succeed in all aspects of my life.”