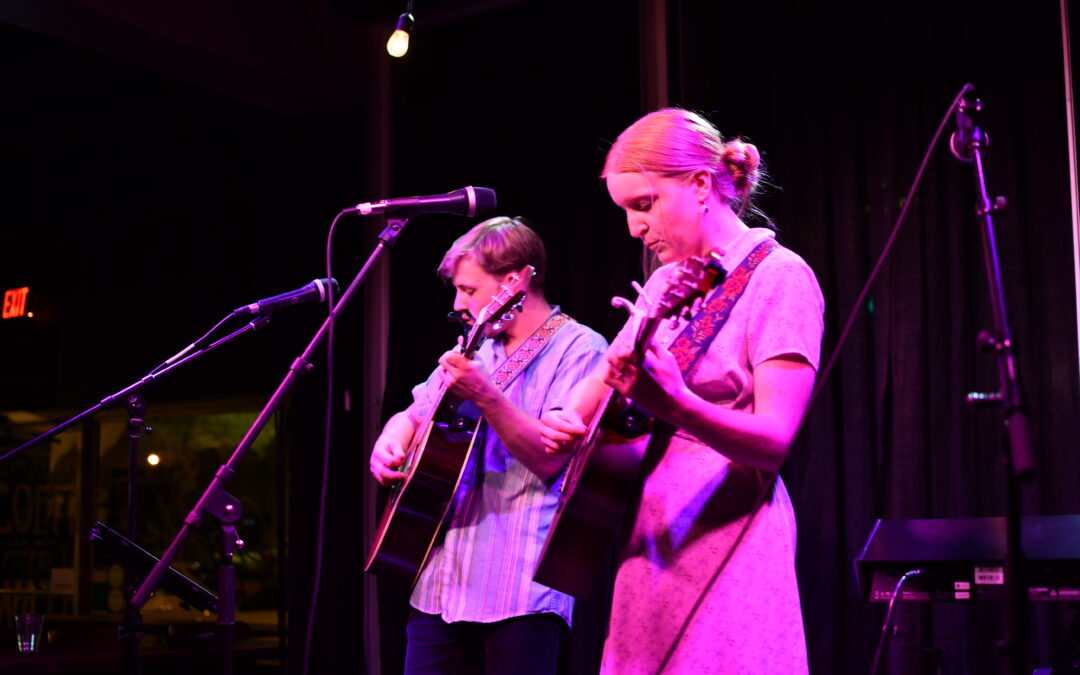 As the weather changes from a biting chill to a warm breeze, what better way to welcome the Spring season to Music City than with some fresh and flowery tunes.

Musical Acts River & Rail, Garden, and Grace Russell made an appearance at the Black River Stage at the Well on April 14 for Spring Fling.

“We thought it would be cool for all three of us, who each have a different sound, but are a little similar, to have a performance where each could bring something cool to the table,” Alex Fincher said.

Fincher is one-half of the Americana Folk duo River & Rail alongside his wife Grace. The guitar-wielding duo met in 2019 and eventually pursued a relationship as a couple and a musical act.

“Out of that just came with a whole bunch of really great stories and a new passion for storytelling through music,” Grace said. “Which I think if I had to narrow down what River & Rail is really about, it’s about telling compelling stories through good music.”

River & Rail swayed their audience with a couple of fresh songs. “Gentle on My Mind” is a personal favorite for Alex, and “Monsters in My Head” is a song led by Grace’s sugary vocals that tell a stirring story.

“It’s the first song the first time I’ve played that song for a group of people other than just Alex and so it’s just nice to have that vulnerable moment, like with an audience sharing this story you wrote and see how they respond to that,” Grace said.

The duo released their Ep, “Vows” back in 2021, and plan to continue releasing new singles later this year.

Spring Fling falls around the first anniversary of the formation of the indie band Garden. While pianist Luke Snyder couldn’t be present for the performance, groupmates Caroline Penington and Nina Petro carried their performance with the gentle riff of Penington’s guitar and their harmony of hums.

Their set included performances of some older originals with “The Storm Within” and “Death and Flowers.” Garden also debuted a couple of all-new songs including “The Water” a song that embodies the experience of diving into the cool blue sea, and “The Lullaby” a song born of the group’s shared hope to provide peace to their college peers as they approach a stressful season of exams.

I think the song is like one minute and like 40 seconds long but that’s all you need,” Petro said.

“We wanted to write a song that people could listen to and could listen to and just like feel at peace and just like take a moment, especially right now.  A lot of people that come to our shows are students and like right now it is very rough with finals. Everybody is so stressed out right now, so we wanted that moment of calm and peace and like reassurance that like you’re doing okay. You’re okay.”

They call themselves Garden because they like to write about “spring and simple things.” The group explained that most of their music is inspired by the nature they observe around them and each other.

“We’re like, what do we feel when we listen to the record like that?” Pennington said as Petro nodded in agreement.

Petro continued, “I just feel like I’m so inspired by Caroline and Luke. I feel like that’s where our strength is. Our writing style is where she’ll [Penington] just play something like random chords on the guitar. And then I’m like, that made me feel something you know, so we just go based on that feeling.”

The group joined River & Rail onstage for a final performance with “Don’t Trip” a song with an upbeat riff and sharp lyrics, to end a night that began on a softer note.

Grace Russell opened the show breezing her fingers through the keys of her keyboard and softly commanding the attention of her audience with her spirited vocals as she sang “Float”.

The piano has always been in the family for Russell, who has two older sisters that also play, and was inspired to pick up the instrument when she was seven.

“I would run off the bus and go practice piano,” Russell said. “I just loved it. So that’s how I got introduced to music.”

Russell usually moonlights as a member of the folk-rock band Hello Darling. Spring Fling was an opportunity for her to go back to her roots as a solo artist.

“I love being able to have both just me and a full band and you know, opening for people and playing, that’s not new for me,” Russell said.

“I’ve really loved that but things like tonight and just getting to play kind of solo singer-songwriter style, like that’s my roots, you know, that’s how I started just being a piano. And so it’s always fun to be able to do that.”

Bathed in yellow lights from hanging lanterns, Russell introduced the highlight of her performance, “You and Me” which captures the feeling of being young, dumb, and in love. Russell shared that the inspiration struck her for the song at 4 a.m. one morning a couple of weeks ago and she almost didn’t give it a chance.

“I think I wanted to create something that someone out there is going to listen to and it’s going to mean something to them,” Russell said. “You know, they’re going to reminisce on those bittersweet days, or it’ll be a reminder that this is hard right now, but like my person or whatever is worth it.”

There’s no denying that Spring Fling was a success for these musical artists. As they embraced after the show and bid the audience good night each performer’s eyes were filled with pride and joy.