Thompson reflects on record-setting freshman season ahead of ASUN Tournament 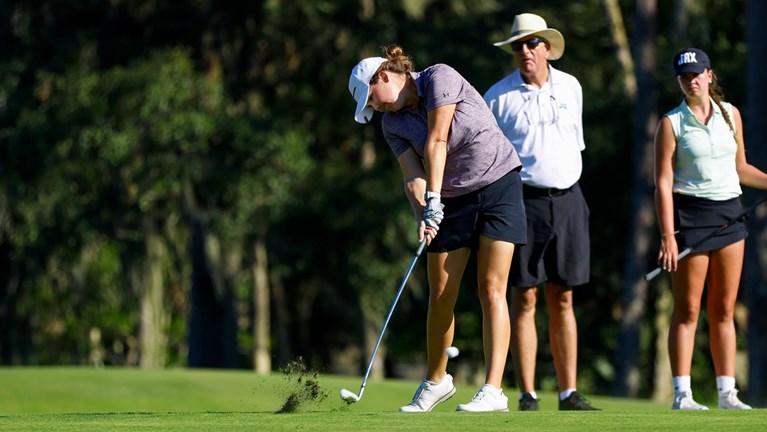 Sports have been present in freshman Lauren Thompson’s life for as long as she can remember.

While most of the Thompson family settled on baseball, though, Lauren was quickly drawn to another sport.

“I played a lot of sports growing up, and I ended up getting into golf. There’s just something different about it. I love the creativity you have to have just out on the course, and I fell in love with the game.

“I dropped everything when I was about 12 and decided that golf was going to be something I wanted to stick with and work towards.”

Already, it seems as though Thompson’s focus on golf has paid off. In just a single year at Lipscomb, the Dothan, Alabama-bred freshman has shattered multiple school records as a Bison.

Thompson immediately led the team by posting the all-time low score in 54 holes by a Lipscomb women’s golfer. She shot a four-under 209 to finish second overall and help Lipscomb to fourth in the first event of the season.

“It was kind of surreal. I don’t think anybody comes in thinking they’re going to play that well immediately, [but] I walk in and I’m like, ‘Alright, this is college golf.'”

“Thanks to my team and my coaches for making me feel so comfortable welcome here; that’s a huge part of why I think I’ve been able to be successful, especially right off the bat. Just the ease that they put me at and the great time we have really made me feel comfortable.”

Golf is a unique college sport in a variety of fashions, one of which is a scoring system that is both individual and collective.

Similar to running events in cross country or track and field, NCAA golf is scored by individual competitors from different schools. However, the main prize at stake is an overall team victory, which collects scores from across the five golfers chosen to represent a school at each tournament.

“It’s a really unique setting. We’re usually stacked, playing behind each other depending on what order we’re in. We do see each other, usually from far, but we always make sure to wave and cheer each other on when we get a chance.”

The sport is also highly strenuous mentally, which Thompson can attest to.

“Sometimes it can be mentally taxing, but the dedication it’s taught me and really just trusting the process… it does pay off.

“Even with just the balance of schoolwork and just being on the road all the time–thankfully here at Lipscomb we have great resources and people who are so willing to help–the travel is so fun, but it can be tiring from time to time.”

Born and raised in Dothan, a classic small town in the Heart of Dixie, Thompson learned to play golf in a much different setting than the place where she’s currently dominating.

“[I was] born and raised in Dothan, pretty small town close to Florida and close to the beach. I really loved growing up there; I’ve been there all my life. [There’s] a great community of people there. Thankfully, it’s not too far from Nashville and I do get to go home if I need it.

While her athletic pursuits see her leave Nashville often for invitationals out of state, Thompson loves the music scene in her new city.

“I play guitar and bass, so that was exciting for me. The big-city atmosphere, it’s awesome. Even location-wise, we get all four seasons, which is something I don’t really get in Dothan.”

Thompson is in good company in terms of Nashville transplants on the team. Of the team’s ten members, only freshman Tsunami Polito and senior Siarra Stout are from Tennessee.

The environment on the team benefits from a unique closeness, according to Thompson.

“I’m close with all the girls, and it’s just amazing that we all are able to bond so well together. They’re all so welcoming, and it made things really easy for me.”

The closeness doesn’t just create an emotional bond, but rather serves a purpose on the course as well. As successful as Thompson has already been, she still sees herself learning as a freshman in a seasoned veteran group.

“[My teammates are] awesome, and the experience that they have has impacted me in the best ways possible. Playing practice rounds and bouncing ideas off each other, just being so willing to learn from each other, it’s great that we’re able to do that.”

Whether it’s due to Thompson’s pure talent, the tight-knit element of the team’s mentality, or some other factor in a game that can be decided by millimeters, the Bisons are as well-equipped as they have ever been going into a conference tournament.

When Lipscomb enters the ASUN Tournament Sunday in Valdosta, Georgia, they will do so with a win, four top-three finishes, and eight top-five finishes in their ten tournaments this year.

While the final event of the year will present plenty of uncertainty, Thompson is confident in the team she has quickly come to know and love this season.

“I totally believe we’re very capable of winning, and I think it’s special that we are able to have that mindset going in. We’re ready, and I know we’ve put in the prep work. We’re excited, above anything, and we have the most fun out there. Keeping a calm, relaxed environment [will help us] go out there and win.”

Besides the conference championship, momentum going into next season is on the line for the team.

“Coming up, we’re really excited about where we’re headed. Thankfully, we’re not losing [many players], and that’s exciting to think about. Some of us are more spread out than others for whatever is home for us, but we’ll probably end up running into each other at different events this summer, which is fun.”

Looking back, Thompson feels pride in what she has been able to do both individually and with the entire team in her first go at college golf.

“I’m really encouraged by this year, and I’m really happy for what we’ve been able to do as a team. I think it’s so special, and I can’t wait to see what the future holds.”

As far as next steps after Lipscomb, Thompson isn’t too concerned about the long-term future.

“[Playing professionally] is definitely in my mind, but it’s just one of those things where I don’t want to get too ahead of myself right now. It just depends on where it takes me when I get to that point. I really enjoy it right now and can’t wait to see what we do in the future.

“I’m not exactly sure what I want to do with [my graphic design major] yet, but I really like music, so I wouldn’t mind doing something with design in the music industry. That would be the ultimate goal, but I’m just keeping my options open as I get further into my studies.”

If her freshman year is any indication, Thompson is set up for success in whatever course she lays out for herself–especially if that happens to be a golf course.