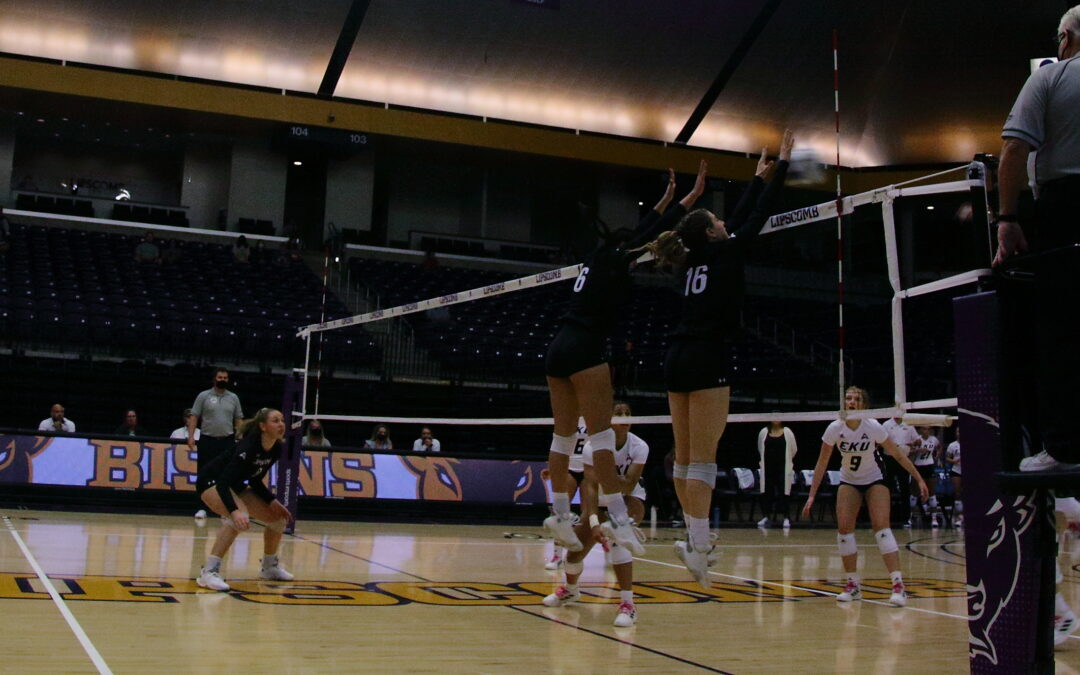 After starting the season with a 3-8 record, Lipscomb has now won five consecutive matches to improve to an even 8-8 on the year.

As it has been for all five matches in the streak, defense was a strong point for the Bisons in the 4-set victory. Three Bisons finished with double-digit digs, including team-leading libero Delaney Smith with 16.

“It starts with our scouting report,” Smith said. “Our coaches are great at setting us up where we’re supposed to be.”

Head coach Brandon Rosenthal, on the other hand, passed the credit for the performance back to his players.

“[I was] really pleased with our defense,” Rosenthal said. “I thought it was really, really stout.”

“When you look at the numbers… it’s not about one, it’s about all six and doing that defensive job. I thought Smitty [Smith] was off the charts today. If you look at some of the nuances or the small plays she made today, she was really, really good.”

Defensive specialist Libby Steinhardt, a freshman from Mt. Vernon, Indiana, earned 11 digs on the afternoon, giving her a new career high with Lipscomb.

“I love the [other members of the team],” Steinhardt said. “The block really helped a lot, and it just felt great being able to play with everybody. I felt like we finally felt simple and played like us.”

A back-and-forth first set laid the foundation for a fascinating encounter between two respected mid-major volleyball programs meeting for the first time as conference foes since 2006. The lead changed hands three times before Lipscomb took control at 22-18 with a 4-1 run. From there, EKU fought back but never regained control, as freshman hitter Anna Aubele and sophomore middle blocker Meg Mersman finished off the final two points to give Lipscomb a 25-23 victory.

In the second set, the Bisons jumped out to a quick 6-2 lead and continued in that vein, never looking back until they had built up a dominant 21-11 advantage. A 7-3 run for the visitors fell short when Mersman delivered another finishing blow to the Colonels and gave Lipscomb set 2.

With their backs against the wall, however, EKU stepped up and delivered a quality team performance. Ten errors from Lipscomb helped the Colonels to a controlling 20-12 lead down the stretch, and EKU finished the job with a 25-18 margin.

As the fourth set started, it was instantly clear that Lipscomb’s mentality had changed. The Bisons flew out of the gate in set 4, grabbing the first eight points of the set in a row to lead 8-0.

“I think we all just wanted it, and you could tell we wanted it badly,” Smith said about the start to set 4. “Just being able to look at our teammates and listen to them has been a big thing for us.”

That mentality shift would carry the Bisons through a couple of determined 3-1 runs from EKU, and the score stayed menacingly in Lipscomb’s favor. Sophomore setter Delaney Dilfer helped deliver the final blow with her 52nd assist of the game, setting up graduate transfer Kathleen Lowry to finish the off the set at 25-13.

Rosenthal celebrated the small moments of success in the team’s fifth win running.

“I think a lot of it is just being simple,” Rosenthal said. “We want to create pressure with our serve, and I thought we did an exceptional job of that tonight. The byproduct of that was that… we were so, so simple.”

“The mentality of the team is really good right now, and again, I don’t want to discredit how hard they’re working each and every day. They’ve taken a huge step forward,” Rosenthal said.

With the win, Lipscomb advances to 5-1 in ASUN Conference play, putting them joint-top of the West Division standings. They face fellow West leaders Jacksonville State 6 pm Friday at Pete Mathews Coliseum in Jacksonville, Alabama. That match can be streamed live on The Bison, Lipscomb’s on-campus radio station.