Volleyball comes away empty-handed at Gamecocks 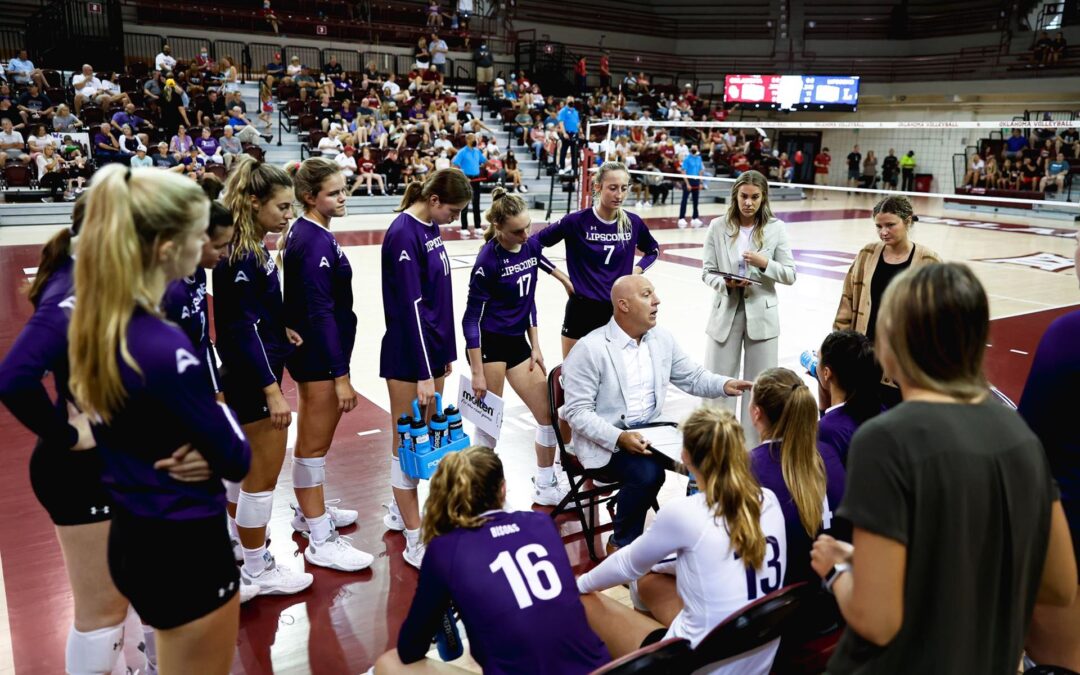 On a difficult night to say the least, Lipscomb lost a six-match winning streak and lost an ASUN match for just the second time all season.

A raucous rural Alabama environment was the backdrop to a day of disappointments for the Bisons, who never seemed to truly be in the rhythm they’ve recently perfected.

In an uncommon scene in collegiate American volleyball, “The Pete” was bustling all night long thanks to a cheerleading squad, a full band, and plenty of excited fans cheering on the red and gray. For Lipscomb, on the other hand, an informal count was made for traveling fans and exactly two were spotted.

It proved to be a difficult environment to play in, per UAB transfer Caroline Stogner, but it wasn’t the overarching issue on the night.

“It was definitely a loud environment, something we’re not used to,” Stogner said. “But I don’t think it affected us as much; obviously we didn’t play as well as we wanted to play, but I don’t think that had a big impact on our play,” said the sophomore from Plano, Texas.

Stogner came off the bench to deliver five kills offensively for the Bisons, her third-highest output since joining Lipscomb this season.

In the end, it wasn’t a sufficient boost for a Bisons team that struggled from the first moment. JSU raced out to a 6-1 lead, forcing a quick timeout from head coach Brandon Rosenthal. Lipscomb did claw their way back to a 7-6 deficit, but could never gain a lead as they would endure another JSU run that brought the game to 16-11.

German outside hitter Lena Kindermann was responsible for five kills just in those first 16 points for JSU, and her offensive exploits made it difficult for the Bisons to respond at all on defense.

Sophomore libero Delaney Smith, who led the Bisons with 3.53 digs per set coming into the match, failed to register a single dig in Set 1, in much part due to quality hitting from Kindermann.

Lipscomb did fight back once more and force an interesting finish to the set, as freshmen hitters Anna Aubele and Addi Pelham combined for all five Bisons points in a 5-3 run to make the deficit 23-20. Sophomore hitter Kam Bacus, who leads the Bisons in kills, found a way to keep the set alive at 24-21, but Zoe Gonzales nailed in the result and sent the home side on their way to their eventual win.

The match went from bad to worse for the Bisons in Set 2, as the Gamecocks again started brightly and kept Lipscomb well away from a lead. After a myriad of small runs and quick side outs, JSU opened up a 13-6 lead early that ballooned into a 19-10 advantage. Pelham and Stogner earned two straight points for the Bisons and sophomore setter Delaney Dilfer added a third straight kill to cut the lead to 19-13, but that was the last flicker of hope that Lipscomb could claim in the second set. The Gamecocks finished the set on a 5-1 scoring run, in which four of their five earned points were Lipscomb errors.

More than anything, Rosenthal found himself disappointed by the team’s effort than anything else on the court in the first two sets.

“I thought [sets] 1 and 2, it wasn’t that the effort wasn’t there, it just wasn’t consistent,” Rosenthal said. “Against a team that had a really nice night… it just is tough. So I was a little disappointed with the effort, and it comes down to execution.”

With their backs against the wall, though, a new Lipscomb team arose from the adversity. This time, it was the Bisons who found themselves in front early on in the set. Sophomore middle blocker Meg Mersman found two of her six kills on the night as well as a block in the 12-6 run that got Lipscomb out of the gate.

Three straight kills from Pelham just moments later, all on assists by Dilfer, forced JSU head coach Todd Garvey into a timeout. Garvey was on staff at Lipscomb in 2017 as associate head coach under Rosenthal before making the move to east Alabama in 2018.

Meanwhile, the home team found their way back into the third set with a 5-2 run that induced a Lipscomb timeout. That only served to build the momentum JSU had collected, though, and the Gamecocks came out of the break in play with a vicious 6-2 run to even the score at 20-20.

The two teams traded attack errors to level things at 21-21, but Lipscomb had scored its last for the night. Kylee Quigley delivered two kills in the final four points and finished the job for Jacksonville State, who now take the outright lead in the ASUN West Division with a 6-1 conference record.

“At the end here, everything we still want is ahead of us,” an ever-optimistic Rosenthal said. “We see some things that we can work on. Let’s get back to work, nothing to hang out heads about. I know this group will respond and I 100% believe in this group.”

Meanwhile, the reigning back-to-back Ohio Valley Conference champions from Jacksonville are now well on their way to a first-placed seed in the ASUN Tournament next month in Fort Myers, Florida. Now fully controlling their destiny in the West, the Gamecocks improve to 16-4 on the season overall.

Lipscomb drops back to .500 on the year, sporting a 9-9 record with a 6-2 ASUN mark. They split a two-day Alabama road trip after beating the North Alabama Lions 3-0 Thursday in Florence.

The Bisons are next in action this weekend in another Jacksonville; the North Florida Ospreys, situated in Jacksonville, Florida, play host to the second ASUN Crossover Weekend of the season starting October 22. Lipscomb will match up against East Division rivals Kennesaw State, Stetson, and North Florida in the tournament that will count in the conference standings.