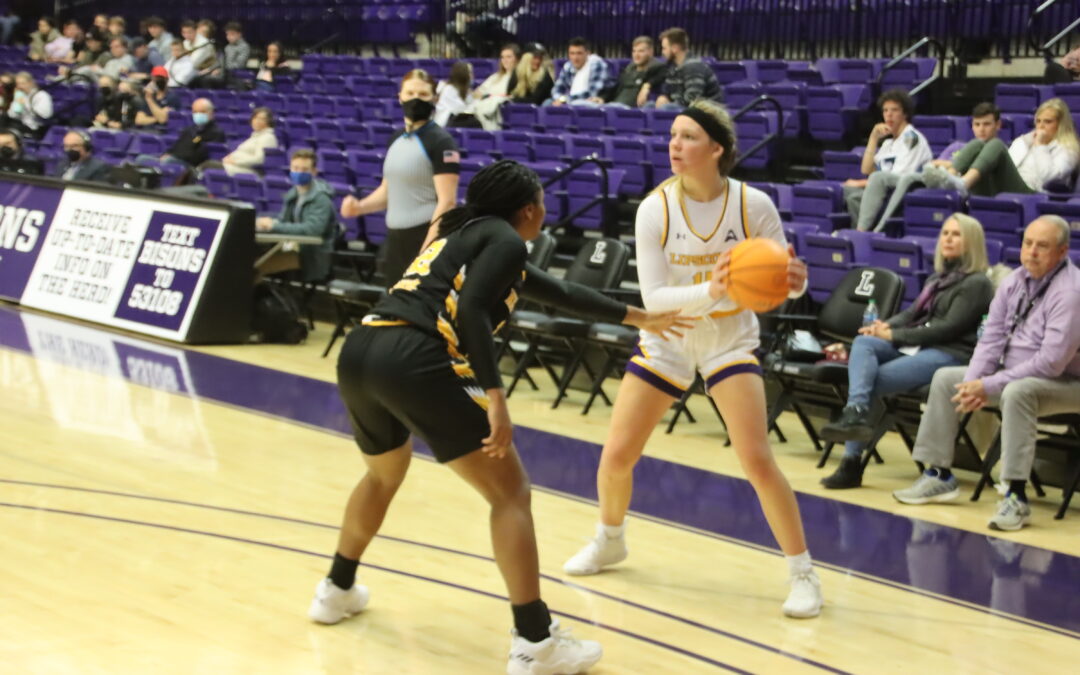 The Lipscomb women’s basketball team came out with a 61-53 home win at Allen Arena to get back on track in conference play against Kennesaw State.

After a tough 36-point loss at Eastern Kentucky, Lipscomb looked to move forward in front of their home fans against the Owls from Georgia.

Kennesaw State started off strong in the 1st quarter, taking a 14-7 lead.  The Bisons went 0-10 from the 3-point line and struggled getting points in the paint as well against a stout KSU defense.

Lipscomb did cut the lead to 3 after a stellar block by redshirt junior Maddie Cook, which led to a fast break score by freshman Bella Vinson, but KSU rallied to put the score at 14-7.

Kennesaw State continued to shoot a high percentage on the court in the 2nd quarter, but Alexis Poole, who led the Owls with 6 points at the time, left the game with an ankle injury.  Poole would return later in the quarter, but the Bisons finally found a spark on offense soon after.

Sydney Shelton, a redshirt senior and Butler transfer, started her strong 2nd quarter by breaking the missed 3-point streak with back to back threes, and sophomore guard Blythe Pearson hit the Bisons’ third 3-ball to cut the lead to 3.

Shelton continued her strong performance with a kick back assist to sophomore Jalyn Holcomb for 3 followed by a fast break bucket after a steal by St. Louis native Jordan Peete.

Shelton, a native of Greenfield, Indiana, finished the half with 13 points and Lipscomb shot efficiently to tally 28 points in the 2nd quarter. Behind the Butler transfer’s play, Lipscomb found themselves leading 35-27.

The 3rd quarter saw back-and-forth action, with shots going down on both sides. The Bisons’ lead was maintained after Vinson responded with a 3 of her own after an Owls’ shot from 3 rattled in.  KSU continued to be a presence in the paint, but a shot clock buzzer beater from Peete was momentous, keeping the lead at 8 at the end of the 3rd quarter.

Casey Collier, a point guard from Knoxville, had her best quarter of the game with a second shot clock buzzer beater for the team. Shortly after, Vinson knocked down an incredible off-balance shot in the paint.  At one point, KSU cut the lead to 5, but it was too little, too late as the Bisons were able to get the lead back at 8 for a 61-53 final.

The Bisons’ next game will be 1 p.m. on January 27 at Jacksonville University, the first part of a two-game weekend in Jacksonville, Florida.