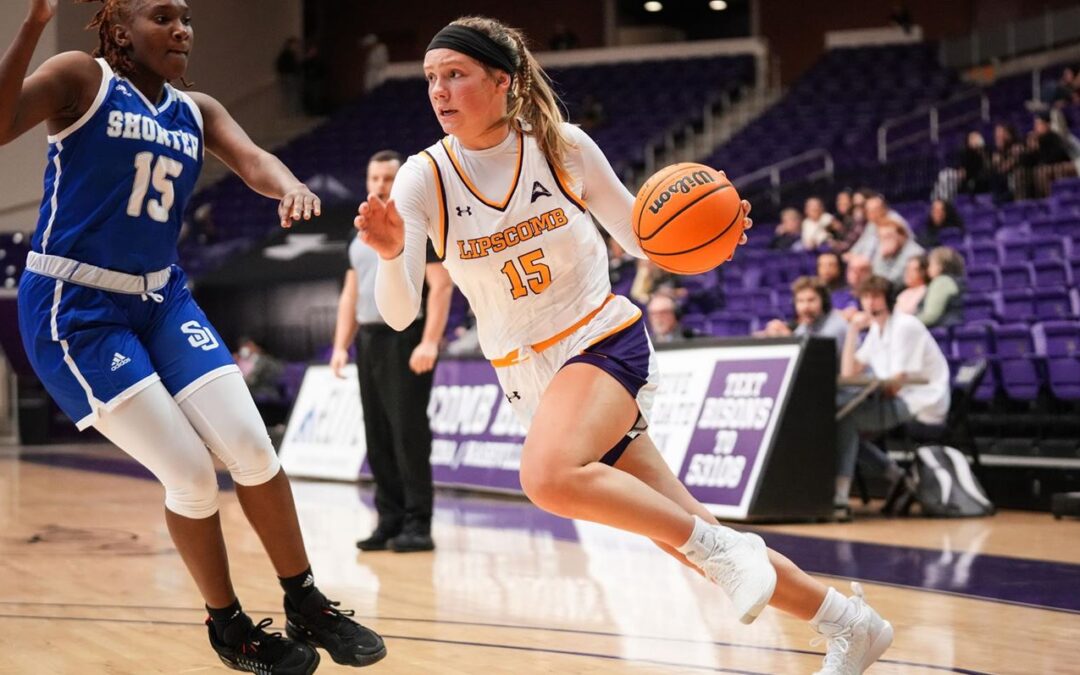 Guards Blythe Pearson and Jordan Peete were the key to Lipscomb’s offensive output, combining for 7-10 3-point shooting and 30 total points. Pearson dropped in a season-high and team-leading 17 points, despite the sophomore wing from Murfreesboro having to play with four fouls for the majority of the second half.

“Jordan [Peete] is a fantastic player,” Pearson, a junior shooting guard from Overland Park, Kansas, said. “The way she can drive to the basket definitely pulls the defense so that I get those open shots.”

“When [Peete] decides to play aggressive, she’s hard to stop on both ends of the floor,” assistant coach Chris Sumski said. “The effort and competitiveness she played with on the defensive end carried over to the offensive end, so that was fun to watch today,” Sumski said.

Both Pearson and center Dorie Harrison ended the third quarter with four fouls, but neither one lost their composure and fouled out for Lipscomb.

“We always have to plan ahead of time; we don’t know how the refs are going to call anything,” Pearson said. “We have to control the controlables.”

What the Bisons did control was a high-octane offensive display, highlighted by a 25-point 3rd quarter. On a night in which Life outscored Lipscomb in the paint and the two teams finished with equal rebounds, it took effective possessions and capitalizing on turnovers for the Bisons to pull ahead. Lipscomb held a 15-point advantage in points off turnovers, creating a significant advantage that they would go on to need.

After a resilient Running Eagles team outscored their opponents in the second quarter and trailed by only 7 points at the break, Lipscomb pulled away with hot outside shooting to get past their NAIA opposition from Marietta, Georgia.

“Coming into this game, we had to keep the mentality that anyone can play with us,” Pearson said. “We have to come in with confidence that we’re going to win the game, but also just some humility. You never know what’s going to happen, so we had to go out and do our best.”

Lipscomb shot 36.6% from the field overall, including marks over 40% in the 1st and 3rd quarters. All told, the Bisons put up 71 shots, including 31 from behind the 3-point line.

Harrison made her first home start of the season in her third appearance this year after a preseason injury, putting in a 16-minute shift and recording four blocks to go with 6 points and 2 rebounds. The senior from Riverside, California, also committed four turnovers on the afternoon.

Sydney Shelton and Maddie Cook, transfers from Butler and Belmont, respectively, each added eight points off the bench. Cook also pulled down a team-leading six rebounds.

With the win, the Bisons extend their winning streak at Allen Arena to 12, with their last loss at home coming in February 2020 against Liberty.

After the Bisons travel up the road for the Battle of the Boulevard at Belmont, they get the chance to go for a 13th consecutive home win against another Nashville-area rival, Middle Tennessee.

“We’re so excited for that game,” Pearson said. “We know that they like to drive the ball, so this week, we’re going to get after it and work on some defense in practice.”

Sumski echoed Pearson’s emphasis on putting the work in to prepare for a high-flying Blue Raiders side right after a crucial rivalry tilt with Belmont.

“Honestly, we haven’t even looked ahead to that game yet. We’re just trying to take it one step at a time; hopefully we can keep that home-court advantage going with all that fan support we’ve had.”

Lipscomb moves to 2-3 with the win and faces the Belmont Bruins 5 pm Thursday afternoon at Curb Event Center. That game will be broadcast live on The Bison, Lipscomb’s on-campus radio station.