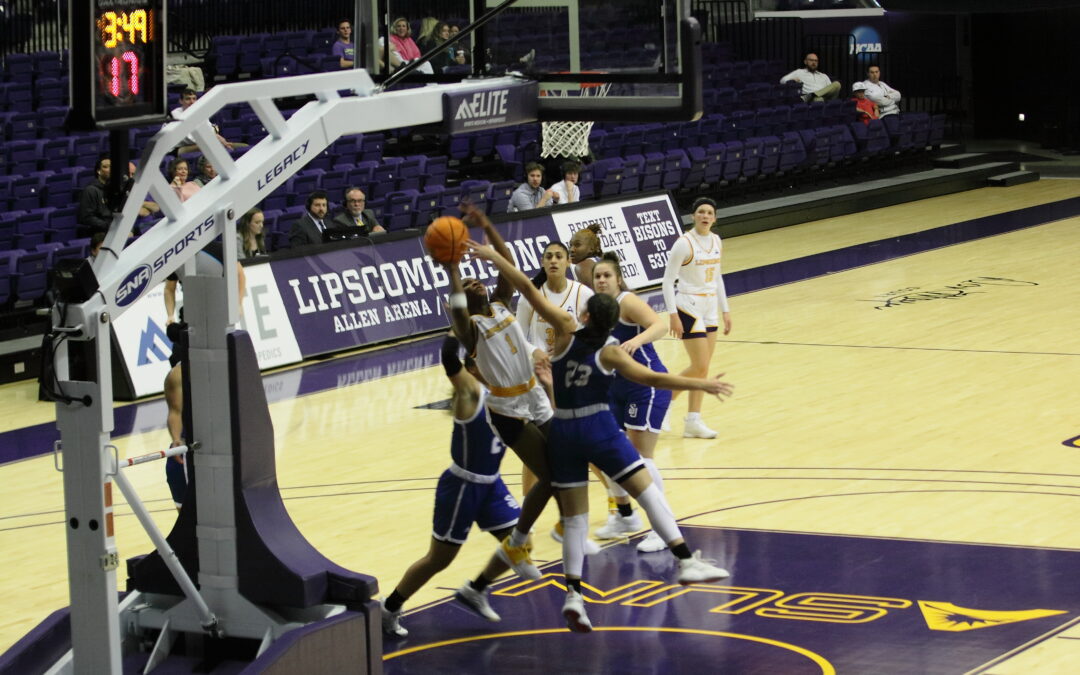 It was never made easy for them, but the Bisons were resolute and found a way to win against a feisty Shorter side. Nine players scored 4 or more points for Lipscomb, as they used their depth to outlast the Hawks in the second half and take control of the game.

After two losses to start the season against BYU and Utah, the coaching staff continued with the process and found the win it warranted.

“Our mindset going into this game was the same,” assistant coach Chris Sumski said. “We’re just really focused on getting better every single day, especially on the defensive end. We were glad to see a little bit of improvement.”

Freshman point guard Jordan Peete led the Bisons offensively with 17 points, also contributing 2 rebounds and an assist. Junior forward and Belmont transfer Maddie Cook added 9 points and 8 rebounds for the Bisons in her first game at Allen Arena in purple and gold.

“Every time there’s a new first with the team, it’s a little bit weird,” Cook said. “I’m getting used to it, but the energy is amazing. Being here with my teammates, I feel right at home.”

Despite their contributions, however, the Hawks made it difficult for the Bisons throughout, especially in the first half.

On the back of hot shooting from Jasmine Gaines, who put up 8 points in the first quarter alone and ended with 20, Shorter raced out to a 9-4 lead at the first media break.

Senior guard Sydney Shelton put in two straight buckets to bring the Bisons back, and it was enough to see the Bisons to a 15-11 lead at the end of the first quarter.

In the second quarter, Shorter applied pressure high up the court and pressed Lipscomb’s ball handlers, forcing turnovers and keeping the Bisons from developing a rhythm.

The Hawks earned the first four points of the second period, leveling things at 15. Meanwhile, the Bisons found themselves unable to break away from their Division II opponents from the Gulf South Conference, in most part due to poor shooting.

Lipscomb went just 11-39 from the floor in the first half, good for only a 23% mark. In the end, they could only manage a 31-28 advantage at the midway point of the game after Cook knocked in a buzzer-beater 3-point dagger.

“It did feel good,” Cook said of her 3-point shot to end the half on a high note. “It was kinda awkward; they weren’t pressuring us, so I went right into it, shot it, and I think that was some good momentum for us going into the second half, just a little more confidence brought into our team with that shot.”

In the second half, the shots started to fall for the home team. After going 0-8 in the first half, Knoxville-born junior Casey Collier made her next two shots and helped the Bisons to a 37-31 lead with under 7 minutes to play in the third quarter.

The Bisons would go on a 11-0 run to further their advantage, and this time, they never looked back. They ended the quarter on a 10-11 shooting clip and with a 21-7 run to put the scoreboard at 56-38.

It was smooth sailing for Lipscomb in the fourth quarter, as they outscored Shorter 17-12 in the final frame. Salem, Oregon-born freshman guard Hilary James and true freshman forward Katherine Weakley put up 11 combined points to see the result out for Lipscomb.

The Bisons take another trip out west to Fort Collins, Colorado to face Colorado State 1 pm Central time Sunday. They will take a 1-2 record into their second road trip of the season.