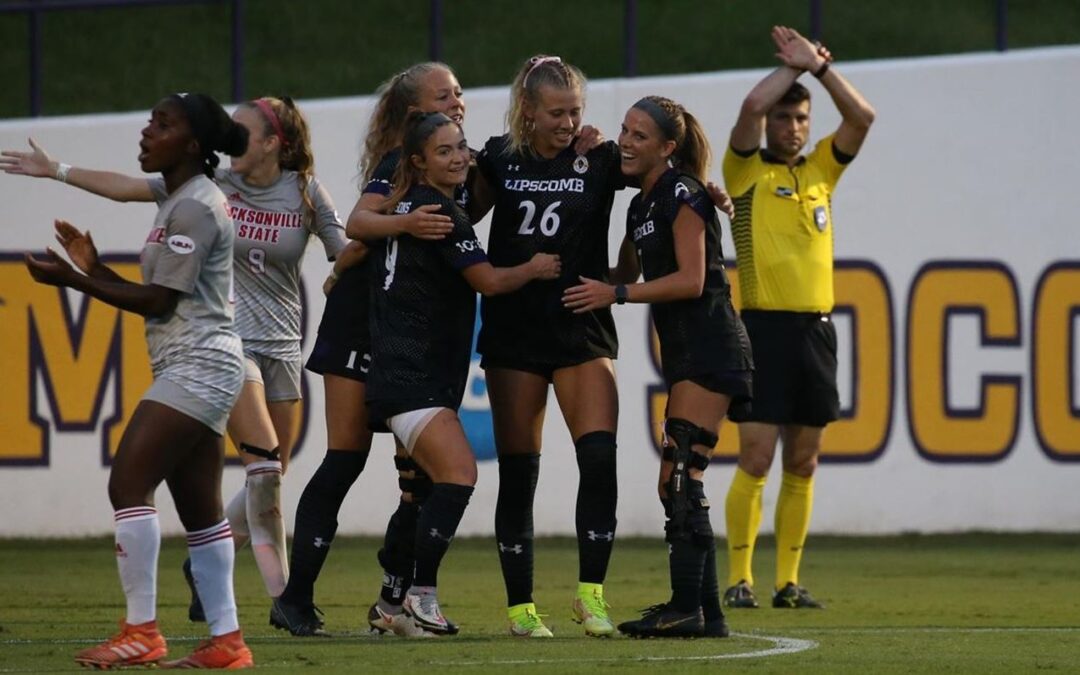 The Bisons got back to their winning ways in a Thursday night showdown with the Jacksonville State Gamecocks by a 4-1 scoreline Thursday.

Both teams were looking for a win in this critical west division match; Lipscomb especially were desperate after a recent 2-1 loss at Eastern Kentucky.

“I’m really pleased,” said Coach O’Brien. “To rebound off a result that was tough to take this was exactly what we needed.”

The Bisons were rowdy from the get-go, maintaining the ball in their attacking third and earning a corner kick in the first five minutes. The first shot of the night was a goal by redshirt sophomore Molly Grant from just a few yards out, with the assist credited to Haley Williams.

Their attacks weren’t the only thing powerful from the start. The Bisons’ strong defense forced the Gamecocks to play the ball back often, altering the Gamecocks’ ability to string together attacks.

About halfway through the first 45, momentum shifted slightly as the Gamecocks began to hold more possession in search of the equalizing goal. In an attempt to capitalize on a good-looking run, the Gamecocks registered a shot on goal but it was an easy grab for Lipscomb goalkeeper CJ Graham, her first save of the night.

With a lead in place, Coach O’Brien brought in 4 pairs of fresh legs. Skye Baun, Noa Ganthier, Shadia Valenzuela, and Kammy McGee contributed a hefty effort to finish the half.

The second half was all Bisons from whistle to buzzer. It began much like the first: immediate control from the home team.

With the help of Allie Dunn, Grant continued to apply a great deal of pressure on the Gamecocks defense as she took another shot close to the net.

“Whenever we play super high pressure is when we do the best,” said Haley Williams. “We have to be able to win the 50/50 balls.”

Lipscomb stayed winning balls left and right. In the 67’ minute, Williams stepped in front of a Gamecock defender to claim possession and freely dribble towards the goal. She fired a rocket that soared into the back of the net to double the lead for the Bisons.

The Gamecock goalie couldn’t catch a break as the Bisons kept herding on. An aggressive attack from the right side allowed Skye Baun to get open in the backfield. Grace Oliver found the switch and booted it to her teammate. Skye was in the perfect position for a quick volley behind the back of the goalkeeper, locking in yet another Bison goal.

Just when it looked to be almost over, back-to-back penalty kicks secured Lipscomb’s fourth goal of the night and Jacksonville State’s first. The Bisons penalty kick was taken by redshirt junior Kristi Jones, who logged her first goal of the season. Her teammates on the field swarmed her with a celebratory group hug and those on the sideline yelled and jumped in excitement while waving their towels in the air.

Despite a number of offside calls, the Bisons outshot the Gamecocks 19 to 5. Lipscomb tops the ASUN conference in the number of shots taken this season while Jacksonville State falls just below them.

The Bisons are back in action at the Lipscomb Soccer Complex Sunday to take on North Alabama. Kick-off is slated for 1 pm.