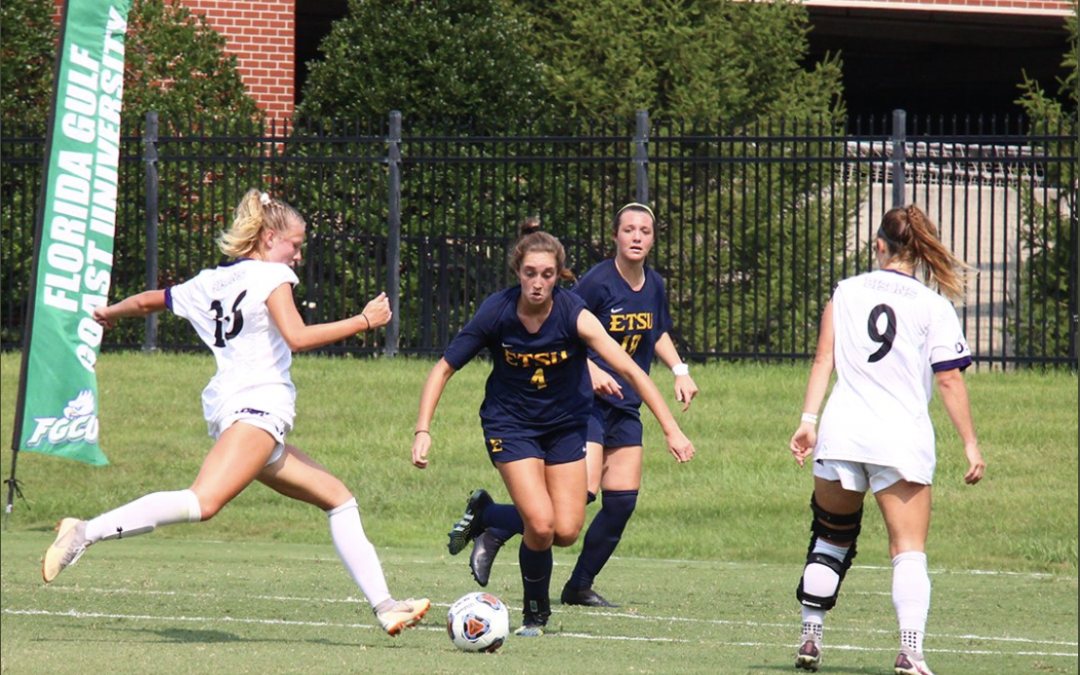 The Lipscomb women’s soccer team drew with the East Tennessee State Buccaneers 1-1 at the Lipscomb Soccer Complex in Nashville.

Two golden goal overtime periods were not sufficient to find a winner in the Sept. 12 game, after each side grabbed a goal in the first half.

ETSU defender Raffaella Giuliano opened the scoring on a perfectly placed free kick. The graduate student from Italy picked out the top left corner on a 25-yard free kick on the right side of the goal, shooting across Bisons goalkeeper CJ Graham and beating her outstretched glove.

That goal was Graham’s fifth allowed in 8 matches this year for Lipscomb. Graham, a sophomore from Swannanoa, North Carolina, added 7 saves to her total against the Bucs to reach 37 on the season.

The home team would rectify the situation in the 36th minute when true freshman striker Shadia Valenzuela equalized. Valenzuela, a native of Buenaventura in the Colombian province of Cali, blasted a shot into the back of the ETSU net from close range, finishing off a quality service from fellow substitute Tori Wheeler on the left flank. Wheeler, a sophomore from Seattle, Washington, put up her first assist of the year in her seventh appearance this season.

Despite a valiant effort from both sides, neither Lipscomb nor ETSU could find a goal after Valenzuela’s finish in the first 45. Sophomore defender Summer Ellmore came the closest for the Bisons, striking the post on a low effort inside the box. The Mount Juliet, Tennessee native found space at the top of the box and shot across freshman goalkeeper Shu Ohba’s goal, but a deflection from Ohba parried the ball to the left post and out for a corner kick.

Freshman attacking midfielder Noa Ganthier made her first-ever appearance in the starting eleven for the Bisons in her fourth appearance. Hailing from Boca Raton, Florida, Ganthier contributed 49 minutes and registered a shot in her first collegiate start.

Lipscomb outshot ETSU 23-14, but could only turn 5 shots on goal. ETSU placed 8 of their 14 attempts on target, forcing seven saves from Graham. The Bisons earned 10 corner kicks to the Bucs’ seven.

Both teams earn their first draw of the season after this result, moving Lipscomb to 5-1-2 and ETSU to 3-1-1. After the two schools’ men’s programs played to a 3-3 draw in Johnson City, Tennessee on Friday, the schools have played to two straight draws.

ETSU came into the match with a 5-0 record in away matches with the Bisons, failing to win this fixture in Nashville for the first time in series history. Lipscomb has now won only one of their past four matches after losses to Pepperdine and Vanderbilt last week.

The Bisons now hit the road for two consecutive away matches after a four-match home stretch. They start their ASUN Conference slate next weekend against the North Florida Ospreys and the Jacksonville Dolphins.

ETSU will return home to host Tennessee Tech on Friday.