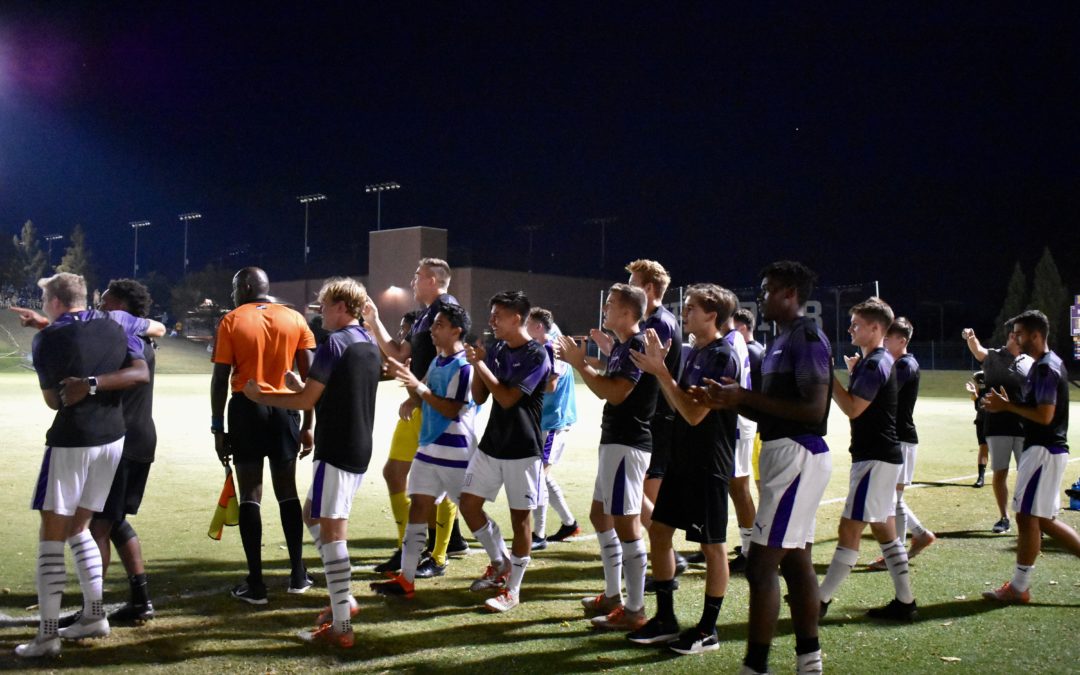 Even though the Bisons had to call on a substitute in net about halfway through the game, Lipscomb’s men’s soccer team opened ASUN conference play with a 1-0 victory over the Jacksonville University Dolphins.

The Sept. 21 victory also was the Bisons first home victory of the season.

Even though it was a low-scoring affair, the Bisons controlled the possession early and had several chances to put the ball in the net but were unable to convert these attempts.

Finally, in the 34th minute, freshman midfielder Ruben Pedersen scored off an assist from senior midfielder John Wynia, putting the Bisons ahead 1-0, the final score.

Entering the second half, Lipscomb seemed to continue to hold the edge in possession, until six minutes into the half, when starting goalkeeper freshman Michael Sibley was assessed a red card and was ejected from the game, leaving the Bisons with one man down and their backup keeper, freshman Alex Brown, in goal.

But the Bisons were able to adjust and respond to this personnel advantage fielded by the Dolphins.

“I thought that we did a good job of limiting their chances, protecting critical areas and making them play negative,” coach Charles Morrow said. “It [playing one man down] takes a lot of effort and a lot of work. Their willingness to put that work in is definitely something we can build off of for the rest of the season.”

Brown’s strong play in goal was a huge contributor to Lipscomb being able to maintain their lead throughout the second half.

“It’s a tough situation for Alex [Brown] to come in, not expecting to play tonight and without getting a feel of the game, and he had to respond immediately,” Morrow added. “I think right off the bat [eight seconds after he entered the game] he had to make a save, so it says a lot about him, but I think it says even more about the group of goalkeepers that we have.”

Goalkeepers are not the only position where the Bisons held the edge in depth. In fact, Pedersen scored after entering the game as a substitute, and freshman defender Kalala Honore had to step up in the final 10 minutes to prevent a late goal by the Dolphins when starting center back Daniel Muhlbauer exited the game to be examined by the trainers. In addition, substitutes for the midfielders and forwards gave the Bisons the stamina to squelch the Dolphins late-game, man-advantage plays.

“For them to keep their focus and work together for that 40-minute period, I couldn’t be more proud of them,” Morrow said. “On what was a tough call and a tough handed deal that they were dealt to play for 40 minutes, I thought they dealt with it really well.”

The Bisons escape with a conference win and improve their record to 2-3-1. As important as this win is to this team in the ASUN, Morrow said he does not want his players to lose sight of the end goal.

“We won the conference last year, and we didn’t win our first conference game. We ended up winning the rest of them, but to get off on the right foot feels good, and hopefully it is something that we can build off of, but we cannot forget the work that goes into it [a win],” Morrow said. “Every conference win is important, but at the end of the day it is just one.”