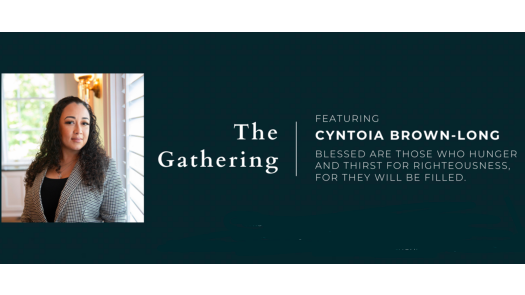 Convicted killer Cyntoia Brown-Long, who became a Lipscomb alum by studying in the LIFE program while in prison, told students that God is ready to help them.

“He is still there even when you can’t see him and he is working in your favor,” said Brown-Long in an interview with Dr. Kate Watkins at The Gathering.

Brown-Long, who graduated from the LIFE program (she also got her GED) while incarcerated for the murder, shared her story during the interview October 13.

Brown-Long — who said she was a victim of sex-trafficking — was given a life sentence at the age of 16, for the murder of a man who had picked her up for sex. She was charged as a prostitute and claimed self-defense during her trial.

She served 15 years of her life sentence in prison, where she would earn her degree and reclaim her faith, she said.

Celebrities like Rihanna and Kim Kardashian were drawn to her case and campaigned for her release.

Through correspondence she met Christian rapper Jamie Long (aka J. Long), who she married while she was in prison. TV appearances drew the two together.

Working with Lipscomb’s LIFE program — the Lipscomb Initiative for Education holds classes for inmates and with students who come to the women’s prison to study — she developed many skills that have helped her in the year since she was given clemency by Governor Bill Lee and released from prison.

She also has frequently praised her husband for helping her recapture her faith.

Brown-Long spoke about her way back to her faith during The Gathering.

She said she grew up in a Baptist setting, but as her life went on she stepped away from her faith.

“Meeting everyone in the Lipscomb community, I was able to see how your faith made you different when it comes to how to treat people,” she said, adding that being in a faith community made her feel a sense of belonging which she hadn’t experienced in a long time.

She told Watkins that her story should help open eyes about those who are incarcerated.

It’s about perception, she said.  “Mainly, how we treat people and how we see people,” are things she said her story can help illustrate.

“These aren’t hardened criminals, these are mothers, daughters, our friends and they are no different from anyone you would meet day today,” she said of her friends who are in prison.

“We have this thing in our culture that separates us and tells us that these are throwaway people and they aren’t deserving of love and respect that is given to other people.

She said her message echoes that of Jesus. “He talked about the same thing. His message is extremely applicable when talking about the justice system.”

While she was in prison she wrote a memoir titled, “Free Cyntoia.” She is now an advocate for sex-trafficking victims and social justice reform.