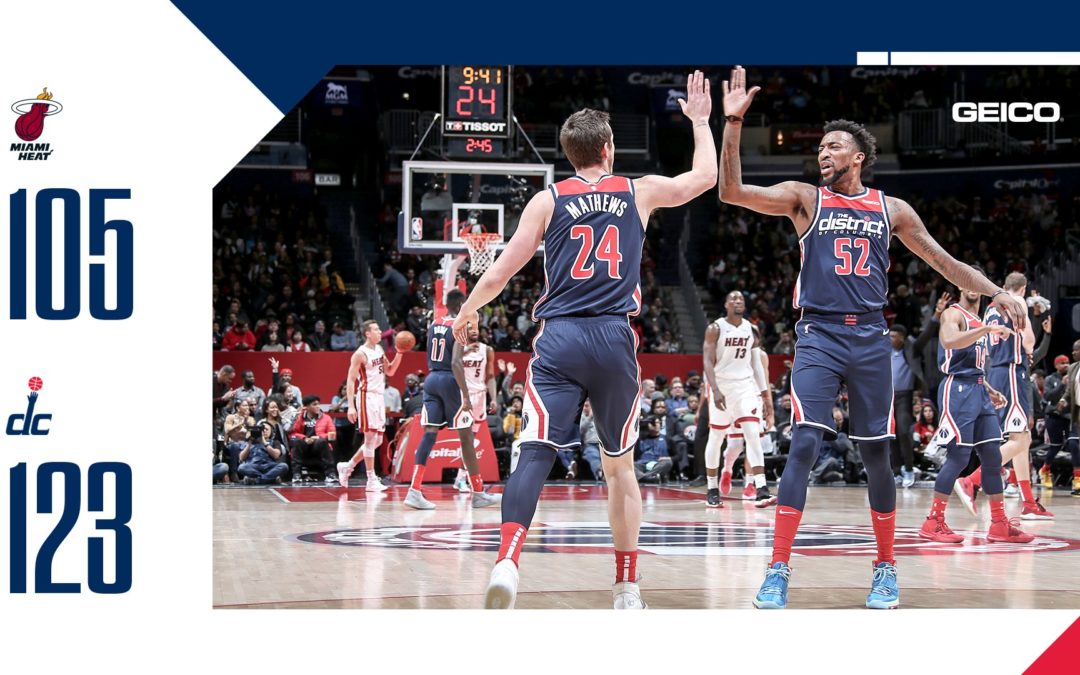 Down seven players, including leading scorer Bradley Beal, the Washington Wizards pulled off an upset win Tuesday  night against the second-best team in the NBA, the Miami Heat. The Wizards’ success is due to their bench production, where they outscored Miami 80-27, including a career-high 28 points from former Lipscomb Bison Garrison Mathews.

Mathews, a two-way player with the Capital City Go-Gos, was recently recalled to join the injury-ridden Wizards.

Entering the game in the first quarter, Mathews quickly scored on a jumper, but it was not until the second quarter when Mathews got into a scoring rhythm. In that second period, he scored 20 points, while the Heat was only able to score 24 points.

Joining Mathews with a career high was Ian Mahinmi, who contributed 25 points; Jordan McRae led the team with 29 points.

At the half, Wizards assistant coach David Adkins was asked about the strong performances from Mahinmi, McRae and Mathews; his response: “That’s 61 first-half points!”

Speaking of Mathews, Adkins said, “Well, you know his nickname is ‘Wild Thing.’”

And Mathews lived up to the name. While his offensive performance was not as strong in the second half, finishing with just 6 points after the break, he continued to draw attention, defenders and fouls, which opened up his teammates for shots.

Mathews finished the night with 28 points, including four three-pointers and four assists.

Mathews earned a standing ovation when he entered the game in the third quarter, accompanied by “M-V-P” chants, and the fan support continued when two questionable fouls were called against the guard. After the final whistle, his teammates and coaches surrounded him to congratulate him on his impressive showing.

Not only did this win snap a five-game winning streak for the Miami Heat and give the Wizards a much-needed momentum boost entering the new year, but it also drew attention to Garrison Mathews and the Lipscomb basketball program. Social media exploded with many asking the question, “Who is Garrison Mathews?” or “Where did this guy come from?”

YOU KNOW HIM NOW https://t.co/j8CshVpWAp