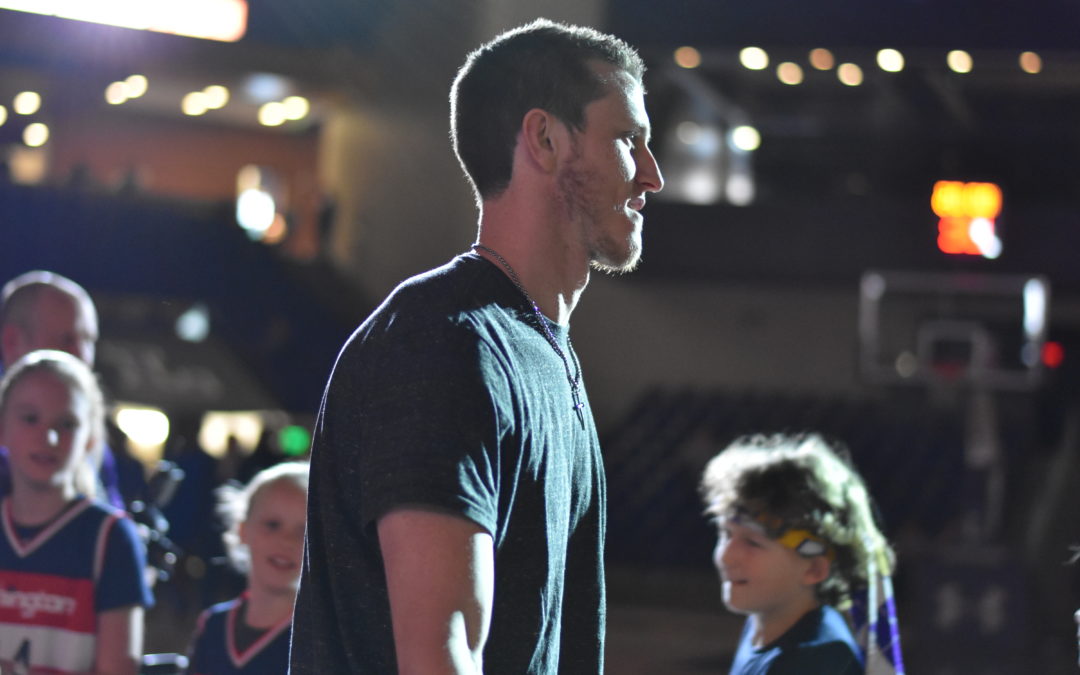 Former Lipscomb University basketball player, Garrison Mathews returns to Allen Arena. Mathews came back to watch his former teammates face off against FGCU on Saturday. Mathews a former Bison, second all-time scorer in ASUN conference, and one of the first players to go to the NBA. His new home is in Washington D.C. where he plays for the Washington Wizards.

Announcements were made to the public by social media that Mathews would be in attendance at Saturday’s game. Many fans poured into Allen Arena for the homecoming of Garrison Mathews. People of all ages wearing Washington Wizards jerseys in the room, repping #24 in honor of the Lipscomb graduate.

Before the men’s game started, Star Wars t-shirts were passed out along with a Washington Wizards poster with Mathews on it. The line was wrapped around the building with many fans hoping to get one so they could get an autograph.

Before tip-off, Lipscomb honored this former Bison by playing a welcome home video which highlighted some of his time at Lipscomb and now as a Wizards player.

As soon as the video concluded Mathews was surrounded by children instantly – all of which who were excited and waiting to get an autograph from Mathews himself. Athletic Director Philip Hutchinson, had to quickly move those Junior Bisons into the stands as they were crowding the court.

Matthews graciously gave an autograph to each person that came up to him.

“It’s always nice coming home to see familiar faces,” said Mathews. “It’s a blessing I can’t thank everyone enough that’s gotten me to where I’m at.”

Garrison Mathew’s is a shooting guard who played 4 years for Lipscomb.

In those four years, he was coached by Casey Alexander, who now is the head coach for Men’s Basketball at Belmont. Being able to make it to the NCAA tournament and following that year the NIT tournament in New York City.

Matthews was named Atlantic Sun player of the year and first-team All Atlantic Sun. In his basketball career at Lipscomb, he had 2,478 career points. After his time at Lipscomb, Mathew’s signed a two-way contract with the NBA team, the Washington Wizards.

In this contract, he agreed that he would spend time working with the Wizards and the NBA G-Leauge.

Mathew’s had his outbreak game in the NBA playing the Miami Heat when he scored 28 points. The Wizards went on and got the win over the Heat 123-105.

He soon after had an ankle injury that kept him out for a few games, but he is now back to the grind.

As a Lipscomb graduate, who broke many records and had many firsts during his time at the University, many say his name and jersey will make it to the Hall of Fame in the coming years.