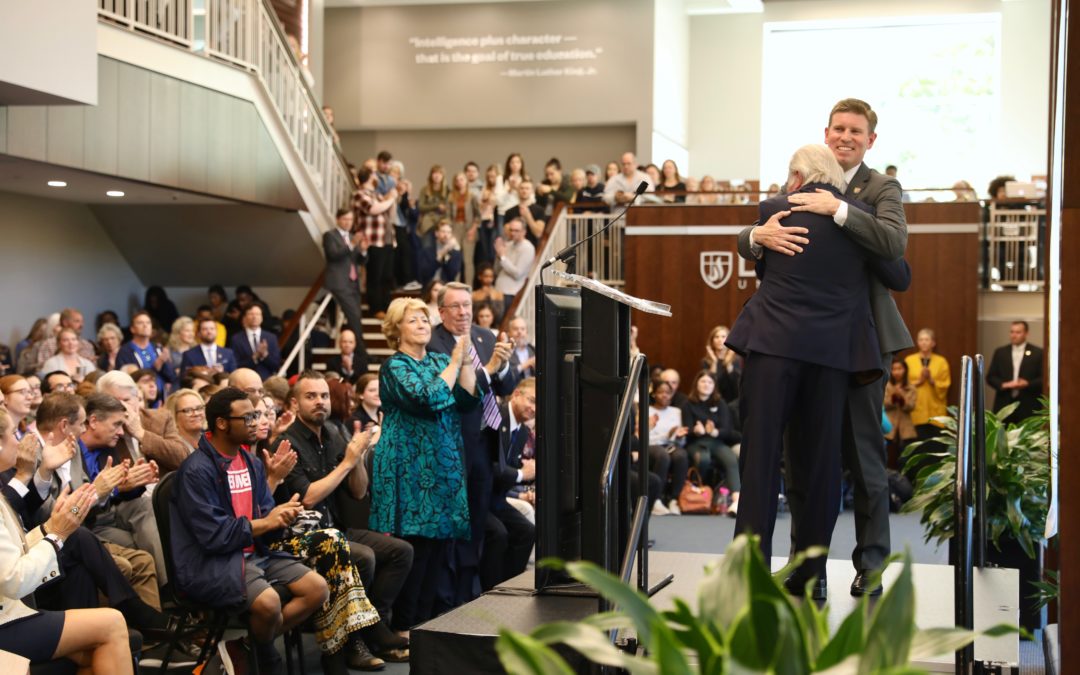 Thursday morning marked the official opening of Lipscomb’s much anticipated George Shinn Center. The new building, which has so far hosted over 4500 people in “pre-opening” events, is called home by portions of the College of Entertainment & the Arts, a welcome center for Admissions and a state-of-the-art event hall.

At the dedication ceremony, President Randy Lowry spoke about what he understood to be George Shinn’s motivations for the gift to the university.

Investment is exactly what they made. According to a press release sent out by the university, the project cost $10-$11 million.

The center will be offering additional facilities for the fastest-growing college at Lipscomb, with collaborative classrooms, studio space and cinematic editing and viewing studio.

Berkley Boglin, a senior commercial music major, spoke at the dedication on behalf of students of the College of Entertainment of the Arts.

“We would like to thank you [George Shinn] for the space you have given us to fuel our creativity,” Boglin said. “Whether we’re music students, film students, animation students, etc., thank you so much for your contribution to this building. We would hope to use it to the best of our abilities.”

After being introduced by the shortest player to play in the NBA, Muggsy Bogues, Shinn took the podium to shed light on his side of the significant donation, by joking about a friend of his warning that “you give too much of your money, George.”

He continued his humorous comments, eliciting laughter from the audience: “When I first met with Randy Lowry, Spencer [his friend] kept having to take Randy’s hand out of my pocket.”

The facility has event bookings up through July 2021.

Check out this gallery by Ben Davis.