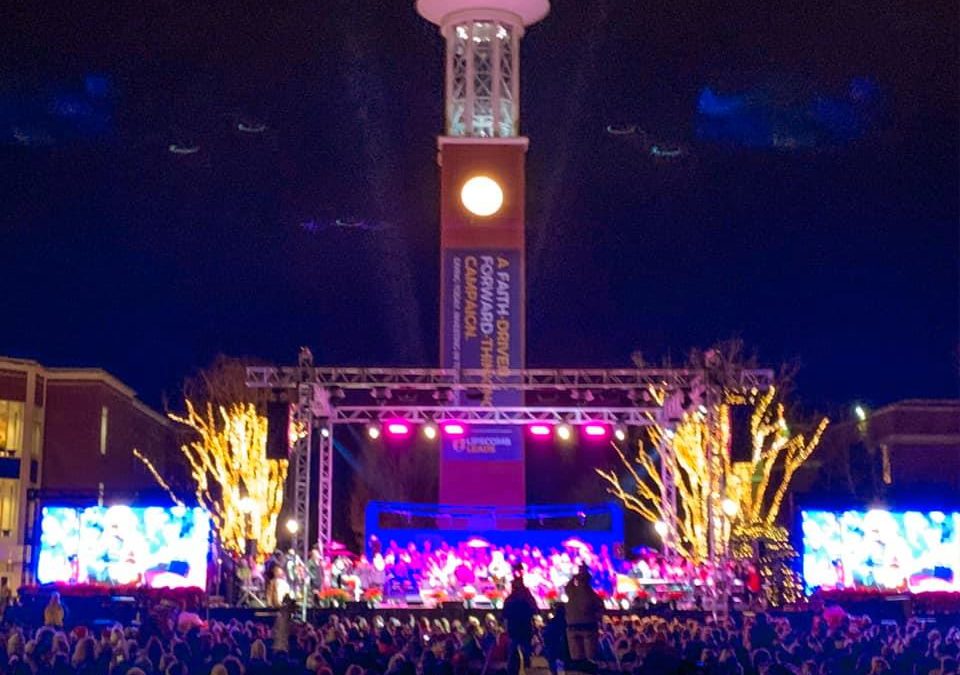 Hot chocolate, Christmas cookies, Santa and Amy Grant braved the chilly temperatures all in the name of the holiday spirit for Tuesday night’s 15th annual Lighting of the Green.

The festive event marked the start of Christmas for the Lipscomb community and gave students the opportunity to celebrate the past semester before the hectic atmosphere of finals week.

Per tradition, Lipscomb welcomed back artist Amy Grant to host the musical celebration. During her set, Grant brought out several “friends” and musical guests to perform songs such as “Silver Bells,” “Grown-up Christmas List” and the local staple “Tennessee Christmas.”

Speaking on her song “Tennessee Christmas,” Grant told the crowd “nobody really gets it quite like the Nashville crowd.”

Choirs from the University as well as the Academy had a special role in the celebration, for they spent the night singing alongside Grant on stage. Other guests of the night included Marc Martel and Anthem Lights, the Christian based artists joined Grant on stage to sing the holiday songs that have shaped their

“Like probaly many of you, I grew up with the music of Miss Amy Grant in the house..which is really mind-blowing for me.” Martel told the audience.

Throughout the night, attendees from the Lipscomb community and the surrounding neighborhoods gathered while admiring Christmas lights and enjoying activities such as the “Merry Marketplace.”

A major highlight of the night is the recognition of a College of the Entertainment and the Arts student with the Amy Grant Scholarship. This year’s recipient is Abby Siler.

When speaking on her reaction to being the reciptient, Siler said “It’s pretty indescribable. Amy has been such a huge influence on my life and in my music since I can remember. I am constantly inspired by how she loves people so well.”

The celebration benefited the Barefoot Republic, a nonprofit camp, that aims to cultivate “Christ-centered relationships between individuals from diverse racial, cultural and socioeconomic backgrounds through an equally diverse platform of artistic, athletic and team-building programs.”

According to a press release from the university, Amy Grant is tied closely to the organization — the camp is hosted on her Franklin farm.

When the night came to a close, President Randolph Lowry was joined by his Grandson as well as the first Bison to run in the NCAA Division I Cross Country National Championship, Brent Leber, to press the button that lit the Christmas tree located on the quad.

The moment that attendees had been hoping for was broadcasted via screens on both sides of the stage and earned cheers from the community.

The tradition continued once again as the audience and stage members came together to sing “Silent Night” which closed the night but marked the beginning for the holiday season at Lipscomb.

For Amy Grant’s rendition of Silver Bells, she’s encouraged audience members to ring their keys. Check out the video below.