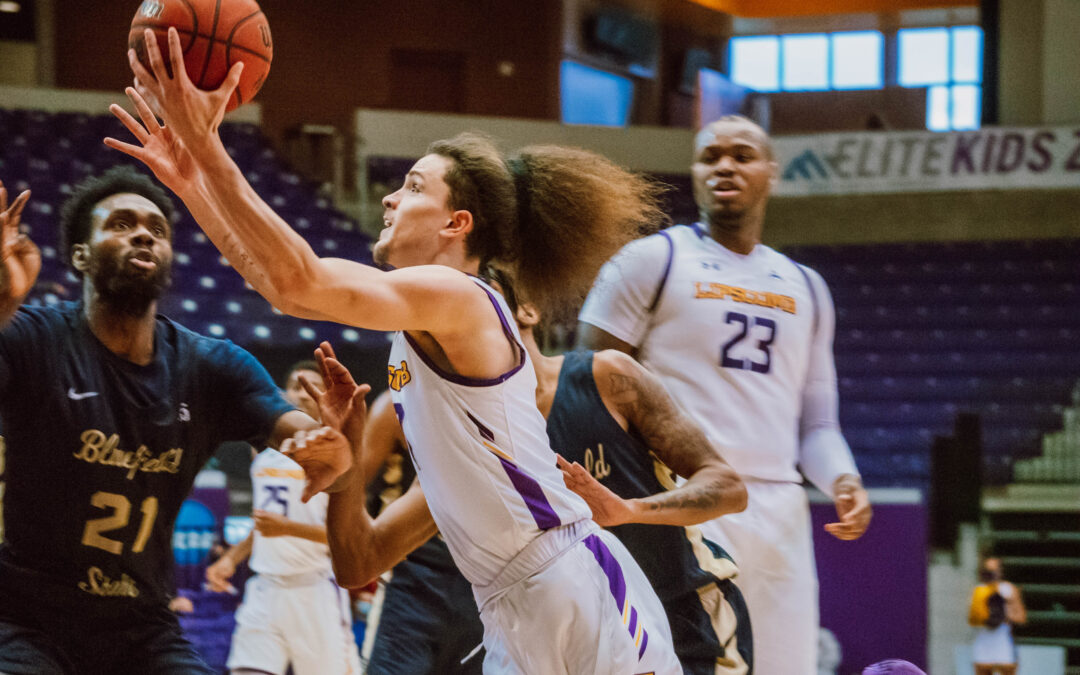 Lipscomb’s men’s basketball team was supposed to play at Stetson this weekend, but since the Bisons had played more conference games than most of their ASUN opponents, the conference announced Lipscomb would get a bye week to allow other teams to fill in the gap.

Luckily, Lipscomb was able to snag a non-conference opponent in Bluefield State, a Division II independent out of West Virginia, for a Saturday matinee game. The Bisons used 41 bench points and limited the Big Blue to just 21 second-half points to win 89-56.
“First off, we’re real [sic] thankful for Bluefield agreeing to come in and play,” Lipscomb head coach Lennie Acuff said during a postgame interview on ESPN+. “We found out Tuesday afternoon that we weren’t gonna be going to Florida.”
Redshirt junior center Ahsan Asadullah paced Lipscomb (11-8, 5-3 ASUN) with 19 points, followed by 13 from sophomore guard KJ Johnson and 11 from sophomore guard Carson Cary.
Junior Marquez Cooper and sophomore Taj-Maal Toney dialed in 13 apiece for Bluefield State (1-4), while junior guard Brandon Anyanwu had 11. The bench only contributed seven points for the Big Blue, who were without the top rebounder in Division II Alex Nunnely due to injury.
“I thought our bench did a really good job, and I was really excited to see those guys get a chance,” Acuff said. “Cause they’ve played well in practice. I’m not surprised by how well all those guys played.”
Lipscomb had a sluggish start and was down 15-7 at the 14:41 mark and then 27-19 with under seven minutes left in the first half.
But Bluefield State could only keep its foot on the gas for so long, giving up a 12-2 run in the final 2:20 of the first half to go down 41-35 at halftime.
Both teams opened up the second half even-paced before Lipscomb used a 26-4 run, capped off by a three-ball from freshman guard Tommy Murr, to take a 73-45 lead with 7:30 remaining.
Lipscomb would finish 10-of-24 from downtown after struggling with treys early on. Four of their deep connections came on their final four made baskets.
Bench players saw significant time for Lipscomb. Including Murr, who has had a slow start to his college career after dazzling at high school in Athens, Alabama, but stepped up and went 4-of-6 for nine points and had three assists.
“When I was being recruited, a lot of people knew me ’cause of the points I scored,” Murr said. “But Coach Acuff always told me that he thought my best asset was my passing… We’ve got guys that can finish, that can make threes, that can finish at the rim.”
Freshman guard Will Pruitt, a local from Mount Juliet, has continued to see an expanded role and added seven points while getting his first start of the season, as senior guard Romeao Ferguson and junior guard Greg Jones rested.
Redshirt freshman guard Tanner Shulman and sophomore forward Jacob Hobbs each put in six points apiece, all from behind the arc.
Lipscomb travels to Florida to take on the Stetson Hatters next weekend to make up this week’s postponed games. Games will be available for viewing on ESPN+.
Photos courtesy of Mckenzi Harris.