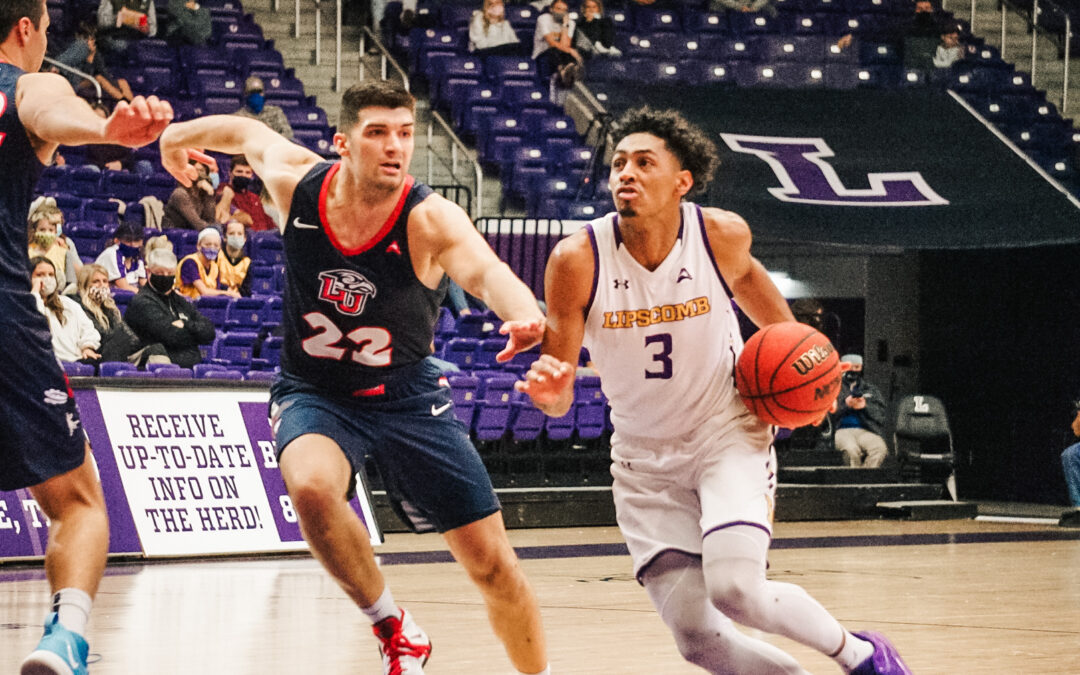 After having a field day against Liberty on Friday, the Lipscomb men’s basketball team was shut down offensively, making just 35 percent of its field goals. Lipscomb lost 66-50 on Saturday afternoon, wrapping up a slate of two consecutive games at home against Liberty in the ASUN’s COVID-modified scheduling format.
It was a reversal for both teams, as the Bisons (6-6, 1-1 ASUN) had outperformed the Flames in that same category in the previous matchup. But Liberty (9-4, 1-1 ASUN) improved its three-point game a day after going 7-of-29 from downtown, clipping in 43 percent of its triples.
“Yesterday was really, really an emotional game,” Lipscomb coach Lennie Acuff said during an interview with ESPN+. “We got off to a great start, and we had to just kind of hang on for dear life… It just takes a lot out of you, and we just didn’t have the ability or capacity today to rally and put another good performance together. Something we’ve gotta figure out for sure.”
Redshirt junior center Ahsan Asadullah had a nice day with 15 points, but he was limited to 19 minutes of play after committing two quick early fouls. He also led with seven rebounds.
After turning the ball over just four times on Friday, Lipscomb gave up 14 turnovers and got out-assisted 13 to 4 by the Flames.
“The bottom line is they were just a lot better — not a little bit, a lot better — than we were today from tip to horn,” Acuff said. “I thought we came out really, really sluggish.”
Both teams kept things close, with each squad trading leads early and Liberty sitting at a lead of just 10-8 with under 10 minutes left in the first half. Lipscomb’s graduate guard Romeao Ferguson (11 points) narrowed Liberty’s lead to 18-16 with 5:39 left.
But then the floodgates opened, and Liberty ended the half on a 14-4 run, aided by three-pointers from Chris Parker and Kyle Rode. Liberty led 30-20 going into the halftime break.
The Flames eventually expanded their lead to 21, but Lipscomb threatened with a 7-0 run and was down 48-36 with 11:10 left. Liberty’s defense clamped back down again, and the Flames got their widest lead of the evening at 62-40 after a layup from sophomore Blake Preston with 5:39 to go.
Lipscomb ended the game on a 10-4 run which proved to be too little too late as the Bisons lost by 16.
“It’s really hard to keep guarding possession after possession after possession when you can’t get one to go in the goal,” Acuff said.
The Bisons head to Bellarmine on Friday at 6 p.m. CT and Saturday at 4 p.m. Both games can be listened to for free at thebisonradio.com and watched on ESPN+.
Photo courtesy of Mckenzi Harris.