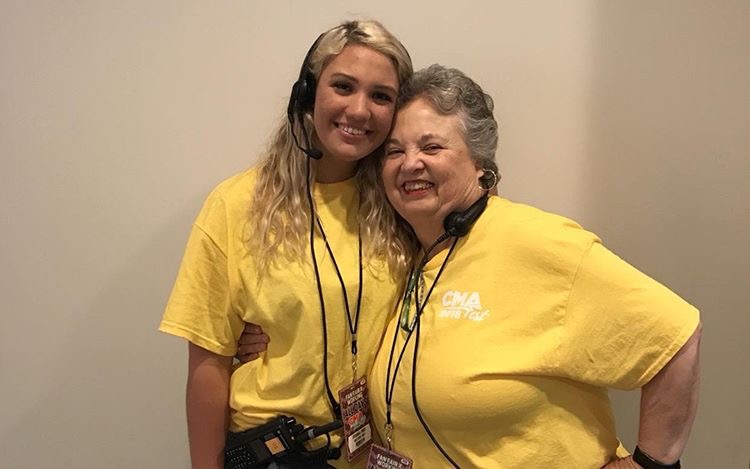 Alongside her grandma, student Veronika Jones worked with Music City Center throughout the entirety of the the CMA music festival and even found a potential career path she said she wants to pursue after graduation.

The Junior International Affairs major worked the Fanfair inside Music City Center at the Radio Disney Country meet and greet. Jones was in charge of counting the fans that lined up and cutting off the line when the performers had to leave.

“A lot of the times performers had somewhere to be right after they were done, like an interview or another show, so it was really fast paced,” Jones said.  “I met a lot of really nice people that were really understanding if I did have to cut the line off.”

Jones worked closely with artists Cam, Maddie & Tae, LANCO and more. She noted that one of her favorite parts about working the CMA Fest was meeting all different kinds of people, not just the performing artists.

“Everybody I worked with was awesome, and I also met a whole lot of interesting people from all over the world,” Jones said. “I met these girls who all became friends through Twitter because they were all Kelsea Ballerini fans.”

Despite the many people she met, Jones said her favorite person she worked with was her “Gran.” Jones’ grandmother works for Music City Center and has worked the CMA Music Festival the past nine years.

Music is a big part of Jones’ family, and she spent a lot of her childhood at the Grand Ole Opry where her Gran worked as a tour guide.

“If it weren’t for Gran, I probably wouldn’t be at Lipscomb,” Jones said. “I wouldn’t have studied abroad, and I wouldn’t have worked the CMA Fest. I owe so much to her.”

Jones has already been asked to return to the CMA Fest next summer along with her Gran. She shared that in the future, this type of job would be something she would consider for a career because touring with a band or musical artist would allow her to travel and meet people while working with the music industry.

“If the opportunity ever arises, I would totally jump for it,” Jones said. “Post-grad if I found a cool job opportunity, whether it be in Nashville or somewhere else, if it came up I would go for it.”