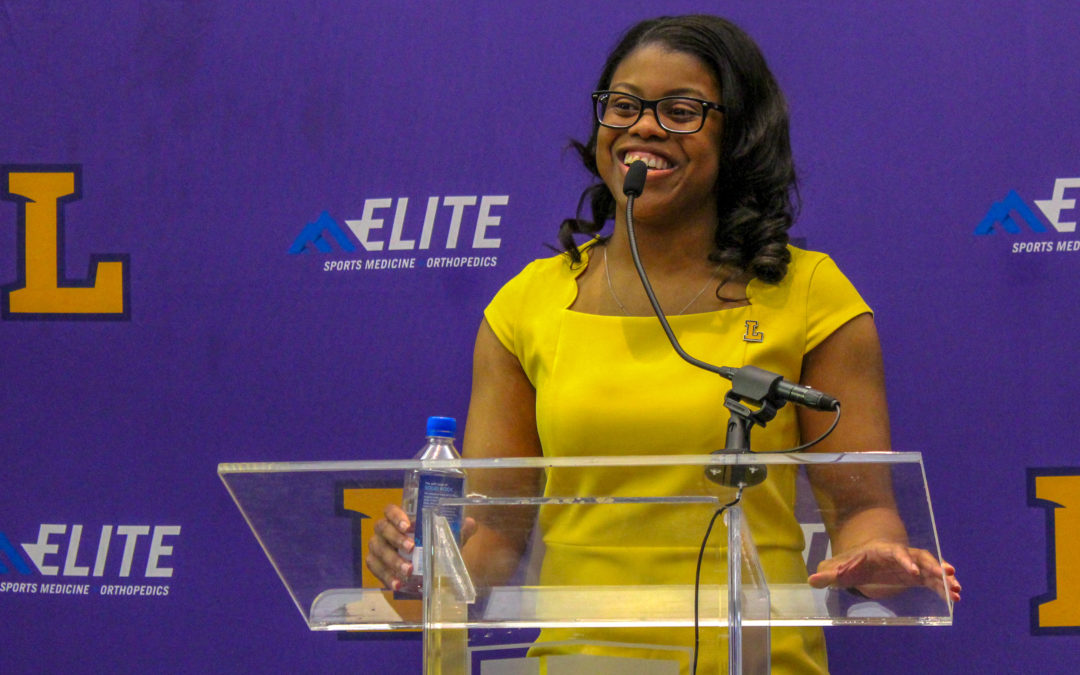 Lauren Sumski says she’s always been the “baby” in the room.

As I sat down with Sumski to hear her thoughts on her new role, she recalled this trend in her life, reflecting back to when she was an eighth-grader playing on the varsity team. Not only was she just playing on the team as a middle schooler, but she was serving as varsity captain. And again, at age 13, she played on a 17U team while still in middle school. She jokingly added she still even has trouble getting a rental car sometimes since companies don’t think she looks old enough.

“When I was in middle school, I was playing up,” Sumski recalled. “I was playing 17-and-under basketball when I was 13. So all of my teammates were just a lot older than me. They had a lot different interests than me, and I was just the baby of the group.”

But she said she thinks God has blessed her with a special maturity to be able to relate to those older than her. This, coupled with her natural intelligence (in college, she was accepted to medical school in Memphis before deciding to pursue coaching), has come in handy as she’s often stepped up to serve in roles typically reserved for those older.

Throughout her life, she’s been able to develop this intergenerational openness, which now helps her succeed in her unique role as a young coach — capable of identifying and relating with both her players and their adult parents.

“I think God had really given me a maturity and respect just to learn from others,” Sumski said. “I think that’s one of my biggest attributes. Usually it takes making a mistake for someone to figure something out, whereas I feel like I’m really good about seeing someone else make a mistake [and learning from that].”

“That means a lot to me,” Sumski said. “[It’s important for] young women seeing female leaders go out — and I think do it a little bit differently. I think my situation is different too, having the opportunity to work with my husband.”

Sumski’s husband is on her coaching staff. They met when she was 13 playing on the 17U team. She said most of the older players and she understandably didn’t have the same interests at the time, so she was practicing at the YMCA while on that team when she met her husband for the first time. They married in 2015.

He was originally coaching at his alma mater, but when Sumski started out coaching at Union, he followed her there, and they’ve been working together ever since. She noted that they went from being in a long-distance relationship to sharing an office two weeks later.

She said she thinks their special situation serves as a great example to the young women she’s coaching — and as an opportunity for the couple to be able to create a real family environment for the team.

“Him being able to play, I guess, second fiddle to me here, but then also when we’re out of basketball … [the players] being able to see me be submissive to him,” Sumski said. “So I think that’s pretty cool. But I definitely think there’s been so many female leaders who have gone out ahead of me and made this opportunity available for me. I just hope to continue to do the same and encourage young women to get in different fields, and show young women how to be strong.”

And she’s already working towards making this Lipscomb women’s team strong. She said she loves being the underdog, but if she hadn’t thought she could get the Lady Bisons winning quickly, she wouldn’t have taken the job.

“We want to compete. We want to win … And I’m not wanting to wait. I think it’s unfair to our seniors who’ve been here for four years … to say ‘Oh, we’re just going to use next year and figure it out, then we’ll be good the following years,” Sumski said.

“No, we’re going to try to win the ASUN this year, and we’re going to start at day one of summer workouts and have those expectations at the beginning of the year. When I was looking at the job, I saw so much potential in the young women already here … the best thing about it is that everyone is counting us out. I love being the underdog. I love it. There’s nothing like walking into a gym and everyone is thinking it’s going one way, and it ends up going the other.”

Sumski said she’s ready to get started in resetting her new team — “Goodness, I’m just ready to get going right now. Today would be fantastic.” — but she said the most important thing to her isn’t the wins or the Division I coaching opportunity. During any conversation, she’s constantly circling it back to her faith and the role it plays in her life.

“I want to hear ‘well done’ at the end of this thing,” Sumski said. “And that’s going to matter more than anything that happens basketball-wise — to be a role model and hopefully be able to walk out and be with Christ, so that when Lipscomb walks out in that gym people say, ‘OK, there’s something different about that bunch.'”