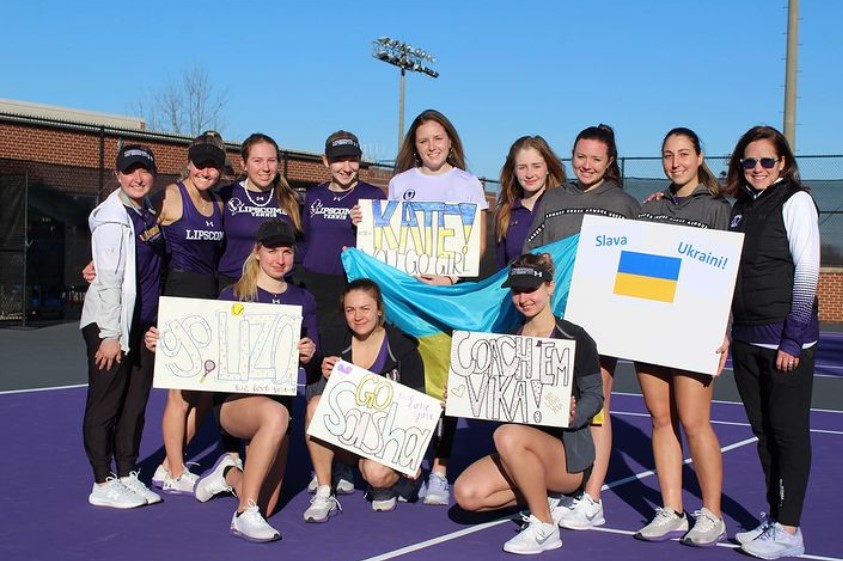 Amid turmoil and destruction, one girl completes a beauty ritual every night before going to bed.

The 11-year-old sister of Liza Diachenko, a senior fashion major and tennis player from Kharkiv, Ukraine, would put on makeup every night before going to bed for one particular reason.

“[My Mom told me my] sister puts on makeup on every night and says if that if she dies, she wants to die pretty,” Diachenko said.

“[No] 11-year old should be thinking about dying,” Diachenko said. “They should be talking about school, friends, boys, or whatever.”

For Diachenko, It’s heartbreaking to see her younger sister experience a “completely different childhood” than she.
One that forces her to grow up fast.

This is one of the many harsh realities Ukrainians are currently facing due to the ongoing Russian-Ukrainian conflict.
On Feb. 24, Russia invaded Ukraine, causing the largest assault on a European state since World War II.
Since the start of the invasion, more than three million refugees have fled Ukraine, and more than six million have left their homes in the country.

Diachenko’s teammates Kate Popova and Sasha Dobranos are from Ukraine as well and have joined her in grieving that their home country has been filled with unrest.

All three women played tennis since an early age and would often travel to different places across Europe to play, including different parts of Ukraine.

“We’re thankful to tennis that we got to explore because not a lot of people pretty much explored the whole country [of Ukraine],” Diachenko said.

When the conflict started, the three joined a group chat with other Ukrainian tennis players to check up on each other, loved ones and cities.

“Everyone is updating [each other] on what’s happening in their city, where their parents are going, [asking] does anyone need a house in a safer city,” said Popova, a senior marketing and hospitality management major from Donetsk.

Sasha Debranos, a sophomore finance major from Kharkiv, emotionally recounted the current situation for civilians back in Ukraine.

“It’s really scary because everybody’s suffering there right now,” Debranos said. “There’s no income for people and no places to live.

“A lot of people try to leave the country or at least their own town because there’s no way to stay there. It’s really dangerous and hard to even talk about it.”

The current Russo-Ukrainian conflict goes back to 2014 and started in Donetsk. Popova arrived in the U.S. four and a half years ago for college and never imagined herself leaving Ukraine.

Seeing all the anguish back home both saddens and angers her.

“[News of the war] was overwhelming and [I was] angry because the civilians didn’t do anything. It’s all politics,” Popova said. “But why? Why are we the ones suffering?”

Images would appear of places from the three’s childhood would be reduced to rubble amidst the conflict.

“I would see all these places where I spent my childhood and [it] just felt personal because it’s like those memories were being destroyed,” Diachenko said.

Head Coach Jamie Aid and Volunteer Head Coach Vika Dzyuba say that the tennis team came together during this time — not only as a team but as a family.

“Everyone is putting their arms around the girls and it’s something that we’re going through as a team, not just the Ukrainian girls on the team.”

The coaches along with the three tennis players are thankful for the support they received from the Lipscomb, from the prayer vigil President McQueen arranged to how many people showed up to a tennis match.

Dzyuba, who is also a native of Kharkiv, is grateful that three are receiving this support and care, especially being miles away from their loved ones.

“I think it does make a difference when you hear [people] saying ‘we’re thinking about you’, ‘praying for your families,” Dzuyba said. “They’re there for you.”

As the conflict continues, Diachenko says that she finds hope within the Ukrainian people’s perseverance, positivity and willingness to fight back.

“It’s been very motivational to see people back home fighting back, staying positive and doing all these good things for each other,” Diachenko said “We’re [Ukraine] just really united as a country”

“I feel like that’s what Ukrainian people do. We did it back in [2014], and we do it again during hard, tough times.”