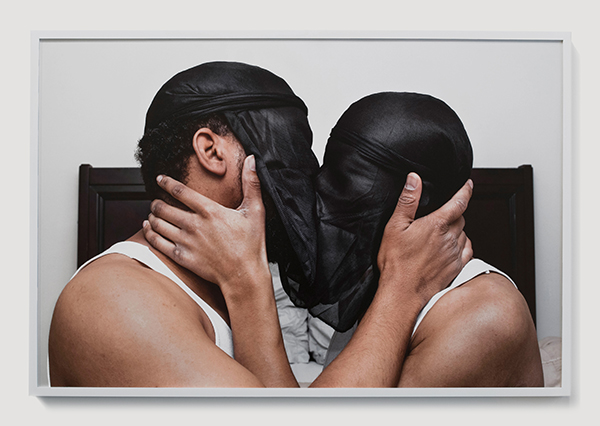 A painting featuring two African American men embracing one another in a kiss in the “Colour Somewhere” exhibit in the Hutcheson gallery will not be taken down, despite initial concerns from Lipscomb administration.

Curator Lawrence Matthews III said his decision to choose the piece reflects the overall message of the gallery.

“I try to represent all of the different aspects of blackness that are not always highlighted in the forefront — but also the wholeness — black people in love, existing in their own element,” Matthews said.

In the piece by D’Angelo Williams entitled “The Lovers,” two black men wearing white tank tops are embracing each other in a kiss while their faces are each covered  by Du-Rags. 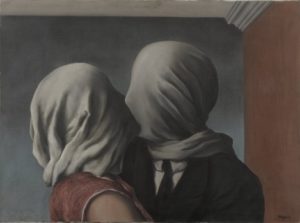 The piece is inspired by the 1928 painting under the same title by Rene Magritte.

The original painting features a heterosexual couple with the same concept, faces covered by white cloth in an embrace. The male figure wears a black suit and tie with a solid white shirt. He embraces a woman clad in a red, sleeveless garment with white trim.

Matthews said Lipscomb staff contacted him on the day of the event with concerns of “vulgarity” within some of the artwork, but Matthews noted that the actual night of the premiere went smoothly.

A couple of weeks after the opening, he received word of negative reactions to Williams’ photo.

“I got a text that someone was uncomfortable about that piece and that it had to come down,” Matthews said. “I immediately called the art department, and I’m like, ‘If that piece comes down, I’m taking the whole show down.’”

Mike Fernandez, the dean of the college of Entertainment and the Arts, declined to comment in person, but he said via email that he thoughtfully made his decision to keep the painting in the exhibit.

“As we would do with any inquiry such as this, we thoughtfully considered the situation and our response,” Fernandez said. “The exhibit will be available for viewing until the closing date on March 16.”

Fernandez added that the curator of any collection collaborates with an institutional representative or a review team.

“As they worked together, our art faculty shared with the curator a sense of the culture at Lipscomb that shapes our artistic aesthetic.”

According to Matthews, the guidelines were vague, with the only direction given him to find “black and upcoming” artists in nearby areas, such as Nashville and Memphis.

Le Marquee La Flora, another artist in the gallery whose main subject is nooses, had an art piece that would have featured nooses hanging from the gallery ceiling, but it was decided before the gallery’s opening that it could not be shown. However, he did have other art pieces that were featured in “Colour Somewhere.”

Additionally, Matthews was not allowed to showcase the exhibition’s centerpiece, which also featured one of Williams’ pieces, due to it showing “too much skin.”

“My work is about desire,” Williams said in a previous artist statement. “I’m challenging the systemic placement in society and the framing of the black male body by using my own. I photograph myself because I am not thin or white, and my lived experience is not a heterosexual one. Black men, other than myself, appear throughout the work as sitters, lovers, helpers or even shadows. Themes and issues of race, class, sexuality, gender, love and intimacy fuel my image making.”

Fernandez said that art is subjective, and art such as this evokes emotion, hence part of his decision to not remove the painting from the exhibition, which is still on display in the Hutcheson Gallery. The last day to visit the collection is March 16.

“Art, by its very nature, is expressive,” Fernandez said. “And the works that are displayed in exhibits on this campus — just like those at galleries around the world — may awe, illuminate, challenge, unsettle, confound, provoke and, at times, offend.”