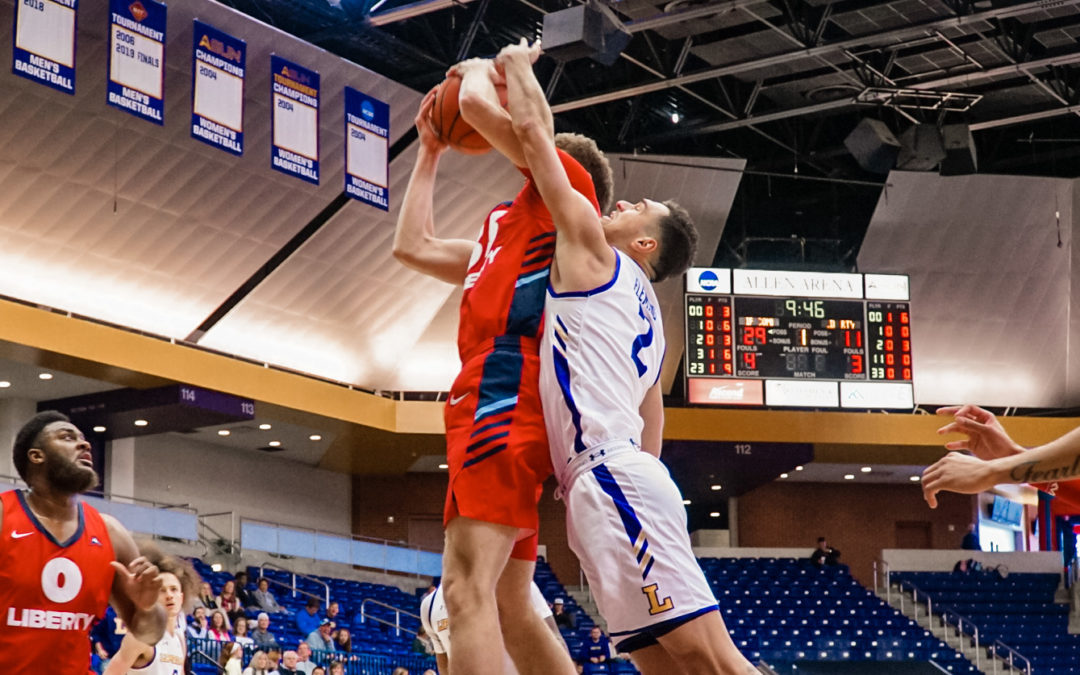 When the Lipscomb men’s basketball team took the floor against Liberty on Saturday, the Bisons needed a tough win or some help from opponents to secure the fourth seed in the ASUN tournament.

Not only did Lipscomb beat Liberty 77-71 (including a 29-6 lead to start the game), but Stetson also lost to Jacksonville, and Lipscomb got the tiebreaker over the Hatters and jumped a spot.

This comes one season after graduating from a star-studded lineup of seniors that included Garrison Mathews and the transfer of starting point guard Kenny Cooper to Western Kentucky. Not to mention Casey Alexander’s departure to Belmont.

“I was really proud of our guys for staying the course,” Lipscomb head coach Lennie Acuff said before practice on Monday. “I thought there [were] many times we could have punted. And obviously our roster’s been depleted, and we lost [Jake Wolfe and Alex Jones] for the year. But we just stayed the course, and we kept going.”

“Florida Gulf Coast is very talented,” Acuff said. “We split with them. They beat us down there, we beat them here. They can really score the ball. We need to play well defensively.”

Lipscomb went 5-8 in non-conference (3-8 against Division I opponents) and then started out the ASUN slate 2-5, including a four-game losing streak to cap it off. But the Bisons dealt North Florida a big shocker by beating the Ospreys in Allen Arena 85-73 and only lost two more conference games along the way.

The biggest surprise was that win over Liberty to finish the season off. Lipscomb started the game a perfect 10-of-10 on field goals and went into halftime 10-of-11 from downtown.

Lipscomb is led in the three major statistical categories by redshirt sophomore center Ahsan Asadullah (17.4 PPG, 9.6 RPG, 4 APG). Nobody can seem to stop him, even though he only shoots a little over 51 percent, which you wouldn’t expect from such an efficient big man.

“I worked a lot in the offseason on post-scoring,” Asadullah said. “And like passing, and stuff like that, and I think it showed this year.”

Asadullah was a key bench player and the second-string to Rob Marberry last season, but this year he’s been picturesque to watch in his first year as a starter.

“I think he should be the Player of the Year in the league,” Acuff said. “I mean, his stats are incredible.”

Tournament seeding is headed by Liberty and UNF.

Here are the standings, according to asunsports.org. Lipscomb split the season series with everyone except Kennesaw, whom the Bisons swept.

Multiple sources with Lipscomb Athletics have confirmed with me that the ASUN will reseed every tournament round. Essentially, the highest seed always plays the lowest seed in every round, not just the first round.

Should they win, the Bisons’ next opponent would most likely be North Florida over in Jacksonville. If unlikely upsets happen in at least one of the top two seeds, Lipscomb will host a second-round game in Allen Arena and likely play Stetson or North Alabama.

Should the Bisons make it to the final round, Lipscomb would most likely play Liberty in the Vines Center in Lynchburg, Virginia, barring a prior upset of the one-seed.

“I think there’s some teams that maybe on paper have a little bit more talent,” Buckland said. “But I think we have one of the best coaches in the league, and we have players that can play.”

Lipscomb’s first task is (obviously) to beat FGCU, a team that just hasn’t found a rhythm under second-year head coach Michael Fly. The Eagles are led in scoring by Caleb Catto with 12.5 points per game.

The first time Lipscomb played FGCU was on January 4, and the Eagles stormed out to a 19-2 lead to start the game. They played again a couple of weeks ago in Allen Arena, and a much-improved Bisons team didn’t have a lot of trouble taking home a 64-54 win.

This game is not a gimme by any means, but it’s definitely winnable. I’ll talk about this in a moment, but Lipscomb has dealt with inconsistency this year.

The nice thing? FGCU turns the ball over a lot when these teams play. Lipscomb’s had a combined 18 steals against the Eagles this season.

Can Lipscomb overcome its inconsistency?

Lipscomb’s had a major Achilles heel all season: inconsistency. Yes, even during that magical 7-2 run the team finished the season with. The Bisons have often had periods or entire games where they played down to opponents or fell flat.

A prime example is the Lipscomb-Kennesaw State game back on February 8. I was at that game calling on our online station, and I watched as Lipscomb managed to pull off a 72-66 win against a team that finished 1-28 this season.

After overcoming a 38-23 deficit to beat Jacksonville, Lipscomb lost to North Florida 82-74 a week before the big win over Liberty. That’s not a bad loss, but the Bisons were down by 20 multiple times during the game and couldn’t stop North Florida’s three-pointers.

But despite those inconsistencies, Lipscomb has found a way to get it done and elevate to the No. 3 seed. So an ASUN tournament title is definitely not out of the question.

“I think arguably the last three weeks, four weeks of the season, we’ve been as good as anybody in the league,” Acuff said.

I feel like this year’s Lipscomb team is one that will find itself with a win Tuesday and then a loss to North Florida in the semifinals. This team has not convinced me it’s consistent enough to make it past that round. That’s just the tough reality.

But I’ll admit Lipscomb has beaten my expectations multiple times since that 2-5 ASUN start. So nothing is out of the question. Just ask Buckland.