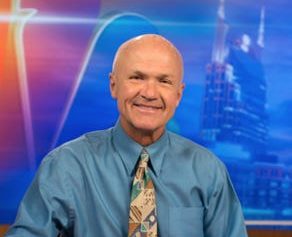 Interviewed by student Tia Calvin, Kalis answered each question with enthusiasm. The room filled with laughter at moments and hushed quiet at others as the students and faculty leaned in to hear the advice and stories from the spritely professional.

His story began overseas. Born in Germany to Russian parents, Kalis immigrated to the United States at the age of 5. After serving in the military police force, he decided to go to the University of Wisconsin in Milwaukee to earn his degree. It was his love for sports that prompted him to choose journalism as a career path. After graduating from college and working a short time for the Green Bay Packers, Kalis moved to Tennessee to further his career in broadcasting.

It was never his intention to stay in Nashville. He reflected on this time in his life saying, “…in 1974 (I) got the opportunity to come to Nashville. Thought I’d stay here a year or two, and then I’d go off to the big time and be somebody. Forty-five years later God said ‘no this is where you are’.”

He offered Proverbs 16:9 as a way of explanation. This verse talks about how we may make plans for our life but, ultimately it is the Lord who directs our path. He also warned against ego and pride and how they got in the way of his career and relationship with God along the way.

“You guys have got stuff you want to do inside. You’ve got to connect with him. You connect with him (God) and he will show you, guide you, because each one of us has a unique talent and if you just race around trying to do your own thing you might make all kinds of crazy mistakes that are wrong.”

But that career success wasn’t the focus of the conversation.

He recognized in front of an audience of young people, that many things in life are trivial and the most important thing is to be real. He credited his success in storytelling to being able to have real conversations and to caring about the people who were in front of him. He used Shaq’s kindness to the children backstage before an interview at the Boys and Girls Club to illustrated that “it’s about being the same person on and off the camera.”

Since his retirement from WSMV, Kalis has wasted no time in adopting a new life mission which is to minister to prisoners at the Riverbend Maximum Security Institution, specifically those on Death Row, and to share with them his faith in Jesus.