American musician Shawn Amos once said, “Memphis is the place where rock was born and Martin Luther King, Jr., was killed. It’s full of contradictions, abject poverty, and riches that only music can provide.”  Lipscomb’s Office of Intercultural Development and Law, Justice, and Society program invited students to Memphis over fall break to witness this city’s unique dichotomy.

Students first visited Beale Street, named by CNN Travel as one of the most iconic streets in America. These three blocks in the heart of downtown Memphis gave students a glimpse into the place where blues, jazz, and rock ‘n’ roll were founded.

“As a music lover, I felt like I could feel my roots on Beale Street. It was heavily influenced by the past and that’s where most of today’s music comes from. Memphis is soul and you could feel it when you walked those streets,” senior Noah Kimbrough said. 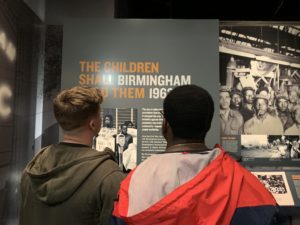 But, the ultimate purpose of the trip was to give students tangible insight into the struggles, sacrifices, and successes of the Civil Rights era and the people who gave the movement life.

The National Civil Rights museum stands in conjunction to the Lorraine Motel, the balcony where Dr. Martin Luther King Jr. was shot and killed. Each exhibit within shows a different aspect of African American history, from transatlantic slavery of the early 1600s to the beginning of the Obama Administration in 2012.

With a recent 200 million dollar update, the museum uses modern technology, live exhibits, artifacts, and film to give students an immersive look at Civil Rights.

Lipscomb junior Eden Melles said that “the trip gave her a new outlook on how the movement affected the past and impacts the future.”

“I think that’s what made it so powerful,” said Melles, “All of this information was stuff we know, but not stuff we’ve experienced. The exhibits and streets made us feel as if we were living in that moment while knowing that our ancestors actually did.”

For more information about the Civil Rights Museum, go to www.civilrightsmuseum.org. Contact the Office of Intercultural Development (OID) for details about future Lipscomb trips.